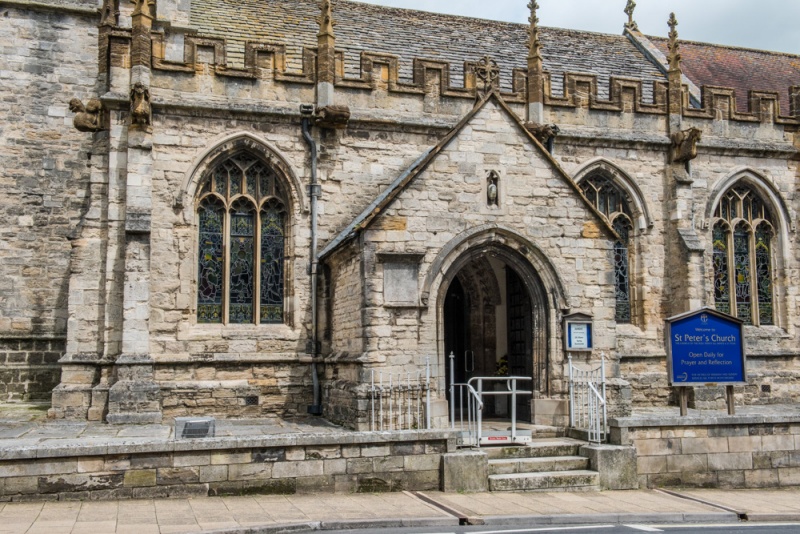 St Peter's church is a Dorchester landmark, its striking 15th-century west tower rising high above the High Street shops and looking down on the neighbouring Dorset County Museum.

Curiously, though it is the largest and most important church in Dorchester, St Peter's has been a chapel to Holy Trinity church since at least 1303. The links between the two churches down the centuries are clear. For example, the 17th-century rector John White was appointed to serve Holy Trinity, yet often preached at St Peter's and is buried in the porch.

The church was built at the upper end of the town's Corn Market in 1454. It consists of a nave, chancel, and two aisles. The eastern ends of both aisles were probably used as chantry chapels. The north aisle was rebuilt by the Williams family of Herringstone, and thus known as the Williams Chapel. 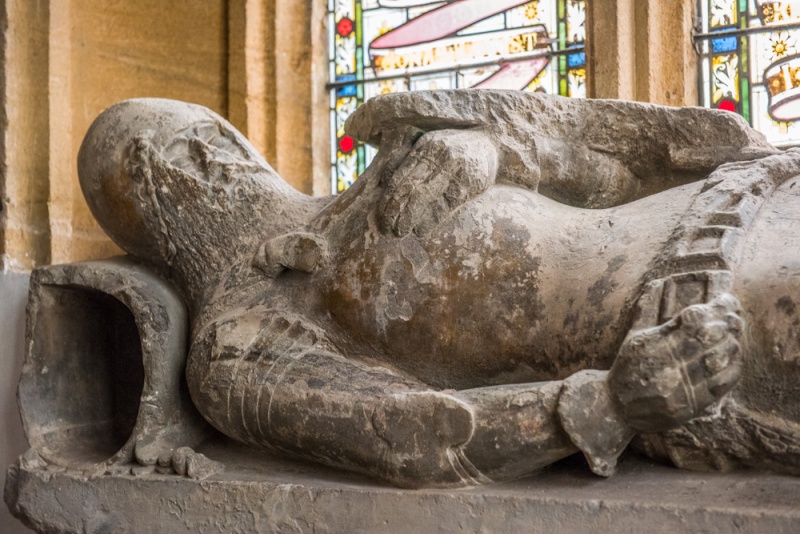 An ornate monument to Sir John Williams (d. 1628) is set high on the north wall of the chancel. It shows Sir John clad in armour, kneeling and facing his wife Eleanor. The couple were married for 50 years, and the epitaph describes Sir John's death in these words:

'... having lived together as man and wife for fifty years they had issue seven sons and four daughters were in the year of our Lord 1617 divided in death. For in that year the 7th September died this knight to the general grief of all good men. aged 72 years.'

Of Lady Eleanor, it is said that 'she lived and died beloved of all'.

The church is almost entirely a product of the 15th century, but it was comprehensively restored from 1856 by the architect J Hicks and his student Thomas Hardy. Hardy of course, would go on to acclaim as a novelist, but he was an architect by training.

The medieval building reveals traces of an earlier Norman church on the site, which may stand atop a Roman temple. Early Christians often built churches on or near sites that were already considered sacred, so it would make perfect sense if there was an early church on the site of a Roman place of worship.

The most intriguing historic features are a pair of 14th-century effigies of knights in the Hardy Chapel (the south chapel). These effigies may have members of the Chidiock family, brought into St Peters from a nearby priory during the Reformation, when monasteries were destroyed. One is set in the window in the north aisle. It shows a cross-legged knight, his head on a cushion and his feet on a lion. A similar, worn effigy of a knight lies in the south window opening. 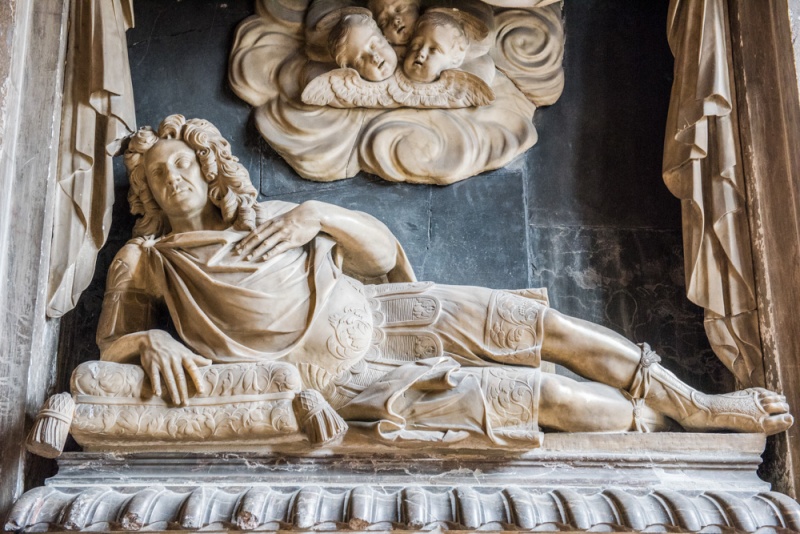 Look for the memorial to Lord Holles (d. 1699), Baron of Ifield. Holles served as an MP. His most famous, or infamous contribution came at the height of the crisis between Parliament and King Charles I in 1629. He was one of the MPs who restrained the Speaker of the House of Commons when he passed motions criticising the king. For this, he was sent into exile, but returned to favour at the Restoration of the monarchy.

Charles II appointed him an ambassador for important diplomatic missions. One mission took him to the court of Louis XIV of France, who must have tried to bribe Holles, for the epitaph says the king 'was not able to corrupt by his magnificent presents, which were more princely refused than offered.'

In a nearby vault lies Sir Francis Ashley, Lord Holles' father-in-law. It seems appropriate, given Lord Holles' support for the Royalist cause, that the painted and gilded royal coat of arms upon the wall is to Charles I.

Another interesting memorial is to Thomas Hardy, but this time it has no connection to the famous author. This Thomas Hardy died in 1599. He was a native of Melcome Regis, and gave money to the borough of Dorchester to provide income for a priest and a schoolmaster, and provide alms to the needy.

St Peter's is open daylight hours to visitors. I can verify this, for I 'discovered' the church by accident when a sudden rain storm made me dive for the nearest cover which happened to be the open doorway of the church.

Once inside, I realised that there was great historic interest to explore, so immediately took advantage of the opportunity to read the church guide and take plenty of photographs. St Peter's is a fascinating historic building, with some very interesting memorials, and its links to Thomas Hardy will delight followers of the famous author. 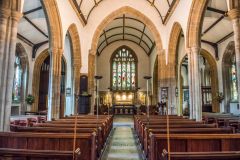 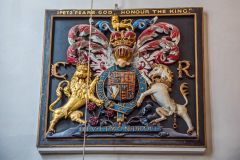 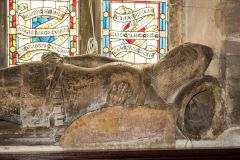 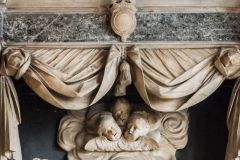