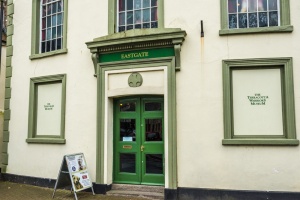 A family museum not to be missed by anyone who has children (or anyone who has ever BEEN a child!). The Dorset Teddy Bear Museum covers a century of teddy bear history, from Rupert Bear and Winnie the Pooh to today's TV stars. There is also a very interesting exhibit on how the 'teddy bear' got its name.

The most popular explanation is that the teddy bear was named for Americal President Theodore 'Teddy' Roosevelt. Teddy Roosevelt was an avid hunter, and in 1902 took a bear-hunting trip in Mississippi.

He spent a frustrating day trying unsuccessfully to track a bear. Several of his aides tracked and captured a black bear cub which they tied to a tree. The aides suggested that Roosevelt shoot the bear, but he refused, considering such an act to be unsporting, but he did order the bear shot to end its suffering.

The event was publicised in the Washington Post, and the ensuing publicity created a demand for cute stuffed bear toys. That demand has never waned, and the Teddy Bear Museum is a testament that even today adults and children alike are still in love with the humble teddy bear!

See a unique teddy bear house with life-sized bears. There is also a well-stocked shop with popular bear 'brand names' like Steiff and Gund.

We especially enjoyed the display of historic bears, which included newspaper clippings covering the record sale of a Steiff bear to a Japanese businessman for a record sum of $110,000.

You can opt to see just the Teddy Bear Museum, just the TerraCotta Warriors exhibit, or both. You can also get a joint attraction ticket that offers admission to the two museums, plus the Dinosaur Museum and the Tutankhamun Museum. That's what we did, and the joint ticket gave us a considerable discount over individual admission prices.

The Teddy Bear Museum is well signposted and only a few minutes stroll from The Dinosaur Museum, just off Dorchester High Street.