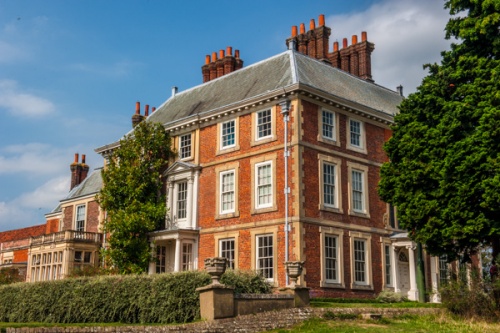 This lovely red-brick house was built in 1629 for Nicholas Rainton, a wealthy haberdasher and soon to be Lord Mayor of London. The house is set in over 270 acres of grounds, offering formal gardens and wildflower meadows. In the grounds is the site of Elsyng Palace, a Tudor royal palace owned by Henry VIII and his daughter, Elizabeth I.

Forty Hall stands on the fringes of London's great urban sprawl, but in the early 17th century this area of Ealing was a quiet country refuge, a day's horse-ride from the centre of London, and a place where wealthy Londoners built great houses and escaped from the pressures of city life. One of these wealthy Londoners was Nicholas Rainton, a wealthy haberdasher and twice Master of the Haberdasher's Guild.

Rainton, later knighted by Charles I, made his fortune importing buttons, bows, and all manner of clothing decoration from abroad. It was an age when becoming Master of a London guild meant you had arrived at the pinnacle of mercantile and social success.

Sir Nicholas decided that he needed a house to reflect his status, and in 1629 he began building Forty Hall and decorating it with ornate plasterwork sure to impress important guests.

The house stands on a small rise, reached by a long avenue of lime trees leading to a large pool in front of the house. To one side is the River Lea, and to the other runs Turkey Brook. It must have been an imposing sight to someone coming to call on Sir Nicholas. 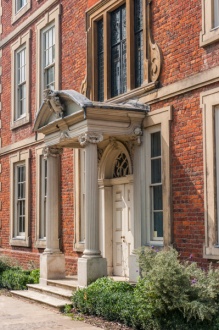 The Neo-classical
side entrance

Shortly after beginning the Hall, Rainton was elected Lord Mayor of London. His new post meant that the very elite of London society would come to Forty Hall, to be entertained in sumptuous style. It also meant that he had to swear an oath of allegiance to the king, and that would soon present a problem.

In 1633 Charles I knighted Rainton. Sir Nicholas was a supporter of the monarchy, but he was also a man of principle, so when Charles I asked for a loan, he refused.

Then he went one step further and refused to help the king raise extraordinary taxes from wealthy London merchants. He withstood pressure from the king and was thrown into the Tower of London for his trouble.

The public outcry was so great that Sir Nicholas was released from the Tower 5 days later. You might think this would turn Rainton into a supporter of Parliament against the king, but Rainton's royalist sympathies meant he was at odds with extremists in the Parliamentary camp as well.

He refused a post on the Parliamentary Committee of Safety, responsible for London's militia. He then refused to help Parliament oust the serving Lord Mayor.

Sir Nicholas died in 1646 and left numerous bequests to help the poor and sick. He gave money to help poor apprentices in Enfield, and to support prisons and hospitals in London. To fund his bequests he left his business premises to the Guild of Haberdashers, and instructions for the Guild to administer several of the bequests. He was buried in St Andrew's church in Enfield. 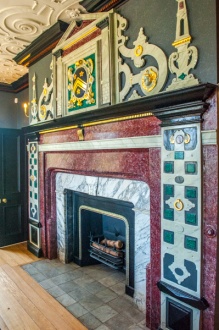 Fireplace in the great hall

After Rainton's death, the house passed to his son, who expanded the estate. The house was sold to John Wolstenholme, another wealthy London merchant, and it was the Wolstenholme family who were responsible for the lovely 18th-century panelling on the first floor. Other later owners included Henry Carrington Bowles, whose family also owned nearby Myddleton House. The Bowles family eventually sold the estate to the Borough of Enfield and it is used as a museum, with changing exhibitions on display within the restored 17th and 18th-century rooms.

Though the history of Forty Hall as outlined here is generally accepted, a 19th-century source suggests that the house was built by Sir Hugh Fortee, and later purchased by Rainton.

My first view of Forty Hall brought a sigh of contentment, but also some confusion. I knew the house was built in the early 17th century, but the red-brick exterior seems to be pure 18th-century style; a symmetrical square block of red-brick, with two equal height floors rising to a hipped roof. The exterior is often ascribed to Inigo Jones, but whether he actually designed the building or simply advised another architect, is not known.

The original house layout was old-fashioned, with a screens passage, reminiscent of a medieval manor, dividing a steward's office from a great hall and a parlour beyond. But it is not the great hall that really catches your eye, but the 18th-century entrance hall, rather crammed into the earlier layout, but bursting with decorative plasterwork in classical style, with panels depicting musical instruments on the walls and the upper floor carried on neo-classical columns. This really is an exquisite room, the best in the house. 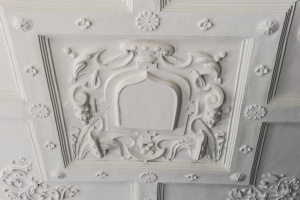 Plasterwork on the parlour ceiling

The hall has more plasterwork on the ceiling, but the main feature is an ornate chimney and mantelpiece, decorated with the Rainton arms. More plasterwork awaits in the parlour beyond.

On the first floor is a suite of rooms, moving from a family solar, or private sitting room, to Sir Nicholas' bedchamber, complete with a four-poster bed. There is a small chamber beyond where you can see the original fireplace, left exposed during restoration work.

You can also see the original timber-framing in several places, though most of the rooms have been restored with 17th or 18th-century panelling. From the upstairs windows, you can get very good views out over the lake and see the long lime avenue in all its glory.

One feature that really impressed me was the excellent information panels in every room. Not only did they explain how each room was used, but also how it was restored, and there were fascinating panels on the life and times of Sir Nicholas Rainton and later owners of the Hall.

Surrounding the house are wide lawns, and trails beside the lake. A short stroll brings you to the small walled garden, once a kitchen garden but now planted as an ornamental garden with raised flower beds and winding paths among old trees. One small area has been planted as a medieval knot garden flanked by red and white roses to recall the Wars of the Roses and the pivotal Battle of Barnet, which took place near Enfield in 1471.

Within the grounds of Forty Hall, to the north-east of the house, are the remains of Elyng Palace, a Tudor mansion once owned by Sir Thomas Lovell, treasurer to the royal household. Henry VIII visited Elsyng Palace more frequently than any other home belonging to a lay subject, and Elsyng eventually passed to the crown in 1539 when Thomas Manners, 1st Earl of Rutland, exchanged it with the king for properties in Leicestershire.

Henry used it as a base for hunting, and his children spent much of their childhood at Elsyng. It was here that Edward and his sister Elizabeth heard the news of Henry's death. James I used brick from Elsyng to help extend his nearby house at Theobalds, and the rest of the palace was pulled down in the 1650s.

Within a few minutes of Forty Hall, are the former stately homes of Myddleton House and Capel Manor. The gardens of both houses are open to the public, and I highly suggest combining a visit to Forty Hall with visits to Capel Manor and Myddleton House for a very enjoyable day out in north London. 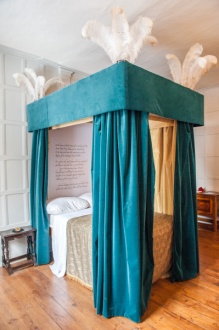 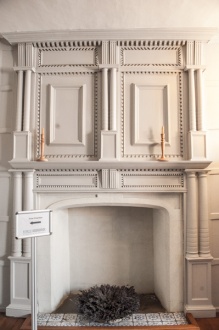 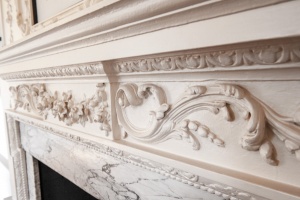 Plasterwork detail on a first-floor fireplace 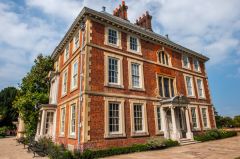 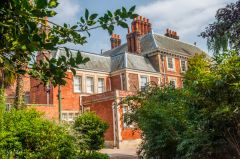 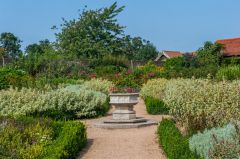 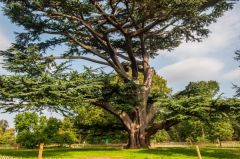 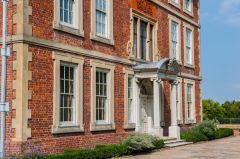 More self catering near Forty Hall >>