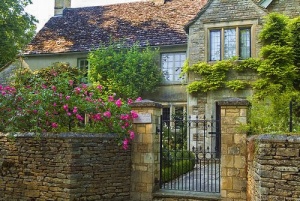 A lovely little village just west of Cirencester, on the fringes of the Cotswolds, Ampney Crucis is set around a picturesque village green with the requisite war memorial, while nearby stands a wonderful 12th-century parish church blessed with a series of medieval wall paintings.

The name 'Ampney Crucis' needs a bit of linguistics to find its origin. It comes from the name of the brook that runs through the village ('Ampney', a tributary of the Thames) and 'Crucis' from the Latin for Cross; a reference to that fact that the village church is dedicated to the Holy Rood, or Cross.

The village was listed in the Domesday Book of 1086 as Omenie, a Latin form of Ampney, and later it was known as Aminel and Aminie before taking on the current form of Ampney.

The village is located just east of Cirencester on the A417 to Lechlade. Turn off the road beside the pub, and you immediately go over a small bridge across the Ampney brook. The village cricket ground is through a screen of trees to your right, and a lovely flower-rimmed green is to your left.

Set back from the edge of the green is a war memorial. The road divides at the former rectory; uphill to the right is a residential area of pretty cottages. To the left is a short cul-de-sac which ends at the parish church. 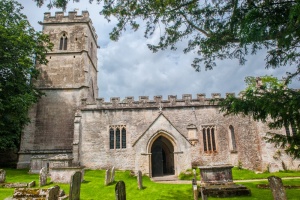 The church is unusually dedicated to the Holy Cross, and dates to at least the late Norman period, though the tower is 15th century. Immediately opposite the porch door the blocked up remnants of a Saxon door can be seen. This is probably a remnant from a much earlier church.

In the churchyard is a 15th-century cross atop a slender column. The carvings on the head of the cross are in quite remarkable condition, a testament to the fact that the head of the cross was hidden behind the rood loft stairs inside the church for several centuries to save it from destruction during the religious turmoil of the 17th century. It was found and restored in the Victorian era.

More self catering near Ampney Crucis