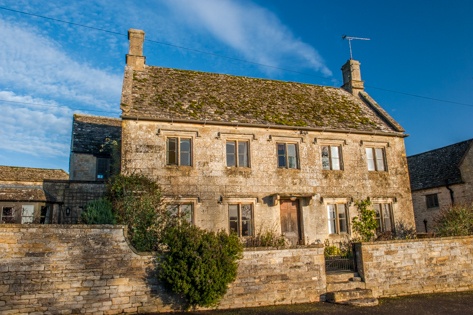 Great Barrington is a beautiful Cotswold village on the River Windrush.

The 18th-century poet Alexander Pope once wrote 'At Barrington shall English bounty stand'. He was writing about Charles, Lord Talbot, Lord Chancellor of England under George I who died in 1737 and is buried in St Mary's church at Great Barrington.

Pope might equally well have been writing about the pretty village of Great Barrington itself, with its honey-coloured cottages built of local Cotswold limestone. 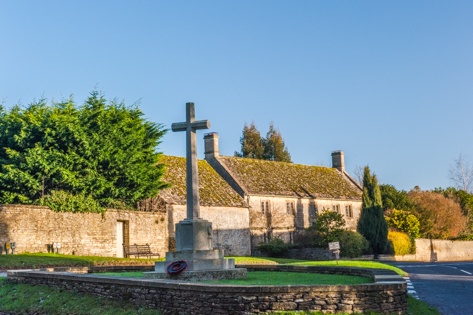 The village lies on the north slopes of the Windrush Valley, facing its counterpart, Little Barrington, across the peaceful River Windrush. Both villages are so typical of the Cotswolds; just a straggle of attractive cottages, the tower of a medieval church glimpsed through the trees, and a network of footpaths leading through farm fields bounded by a mix of hedgerows and drystone walls.

One of those paths leads down a sunken lane, with hedgerows on either side, to Barrington Mill, built in 1794. A channel of the Windrush flows directly under part of the mill, which is now a private house. The path leads right through the mill's front garden to a bridge across the river, where it joins the Windrush Way long distance path, following the river 14 miles between Winchcombe and Bourton-on-the-Water, the 'Venice of the Cotswolds'. 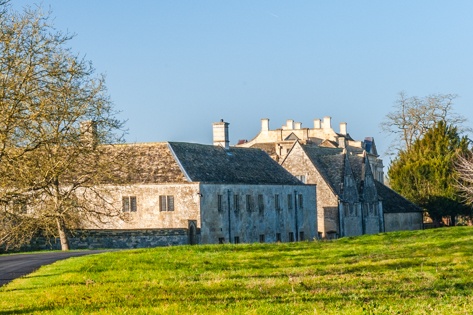 There are no amenities in Great Barrington; unless, like me, you count the village itself as an amenity, along with the idyllic countryside setting. And what English village would be complete without its pub?

In this case its the Fox Inn, a lovely 17th-century traditional inn on the south bank of the river, with a patio where you can enjoy a cold pint and watch the Windrush drift by.

Charles Talbot would not recognise the neo-classical facade of Barrington Park, the attractive Georgian manor house, which was begun just before his death. The Park replaced a 16th-century house destroyed by fire, but parts of the older house survive as part of the stables for the 18th-century building. 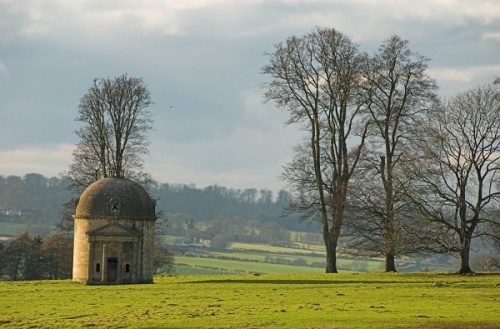 Gothic folly in the grounds of Barrington Park

In the grounds of the Park, and visible through a pair of fanciful wrought-iron gates, is a late 18th-century dovecote in the shape of a Roman temple. The grounds of Barrington Park include an 18th-century neoclassical folly and remnants of a medieval deer park. Although on private land, the folly is clearly visible from the road.

Immediately beside the manor house is St Mary's church, built in the 12th century. Despite Tudor rebuilding efforts it still retains a wealth of medieval architecture, including a 12th-century chancel arch.

Entering by the south porch, the first thing that meets your eye is a memorial to Jane and Edward Bray. The inscription tells a poignant tale; the Brays were brother and sister, the children of Edmund and Frances Bray. Jane died of smallpox in 1711 at the age of 7, while Edmund contracted the same disease in 1720 and died at 14, ending the male line of Brays at Great Barrington. 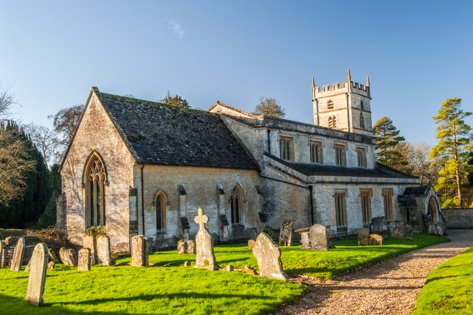 In the south aisle is a worn effigy to Captain Edmond Bray, who died in 1620. The Captain wears a beautifully carved ruff collar in the late Tudor style.

When the Bray line ended in 1720 the estate was sold to the Talbots, who built the neighbouring manor house. Against the west wall of the nave is a superb memorial to Mary, Countess Talbot, who laid out the landscape gardens around the Park.

The most infamous episode in the long history of St Mary's church occurred in 1682, when Thomas, 1st Marquess of Wharton, a notorious hell-raiser, broke into the church when drunk and relieved himself in the pulpit. It's a lot quieter today; in the 3-4 times I've visited the church I've never met a single person. 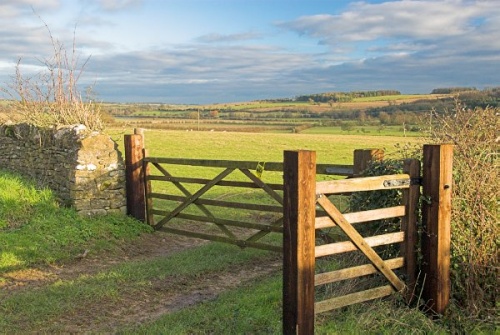 Footpaths lead across a raised causeway to Little Barrington.

The Barrington Park Estate is no longer the home of landed gentry, but serves as the centre of a large farming estate, raising dairy cattle and sheep, and growing grain crops. There's no other local industry, and most of the roughly 100 inhabitants of Great Barrington commute to work in larger centres like Cirencester, Cheltenham, or Oxford.

Across the road from Barrington Park, cottages are laid out along a quiet lane. Footpaths lead across the valley to Little Barrington, making use of a long causeway to raise the footpath above the sometimes wet ground by the riverside.

The woodland here is full of snowdrops in the early spring, and bluebells later in the year, making for some very enjoyable rambling along the quiet lanes and trails that crisscross the area. As a historical pamphlet in the parish church proudly notes, stone from this area was used in the building of the Houses of Parliament.

Great Barrington is on a minor road between Windrush to the west and Taynton, across the county border in Oxfordshire, to the east. It is just off the A40 on the north bank of the River Windrush.

More self catering near Great Barrington