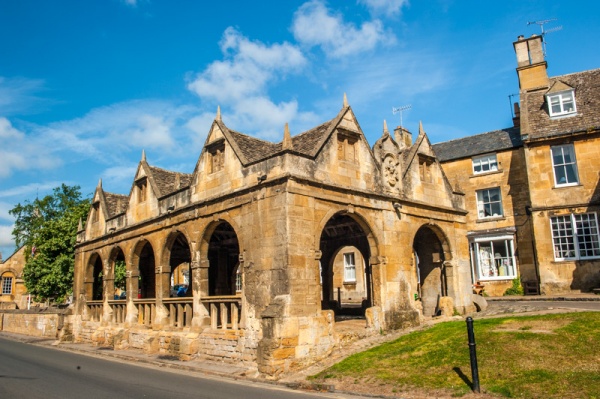 In 1627 Sir Baptist Hicks, a successful merchant, moneylender, friend to monarchs, and 1st Lord Campden, built a market hall on the High Street of this pretty north Cotswold town. It is astonishing to realise that the total cost of the new market hall was the princely sum of just £90.

The hall was intended to provide shelter from the elements for merchants and farmers selling goods like cheese, butter, and poultry (not, as you might think, wool). The side walls were open arches to allow light, and customers, access to the market stalls. The floor of the market hall was made of simple cobbles, now worn smooth by the passage of time and thousands of feet. The building is listed Grade I for its historic importance.

In the 1940s the hall was threatened with sale to an American, but local people, alarmed at the prospect of their ancient building being sold abroad, raised the money to purchase the property and gave it to the National Trust.

The Hall is still regularly used by local traders. One time we visited there was a stall selling sheepskin rugs and baskets. 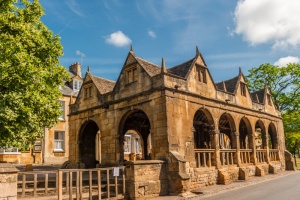 The Market Hall from the west

The building is rectangular, with three gables on each long side and two gables at each end. The gables were all furnished with small windows but these have since been blocked up. There are pyramidal pediments at each corner and the long sides are protected by a balustrade.

The building plan is what is known as a double arcaded loggia. The material, as you might expect in the Cotswolds, is local golden-coloured limestone. A panel between the two east gables displays Sir Baptist Hicks' coat of arms.

The roof is supported on slender stone pillars forming an interior colonnade. Each pillar is raised on a chamfered plinth of a floor made of stone cobbles. The south wall is supported by a low buttress and to the north by a low stone wall.

The man with a colourful name was a prolific benefactor to Chipping Campden. He served as Lord Mayor of London, but he really rose to prominence by lending money to King James I and befriending Charles I. Around 1608 he purchased the manor of Chipping Campden and took the title of First Lord Campden. 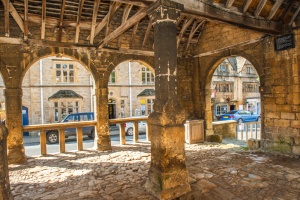 The interior of the Market Hall

Aside from giving the Market Hall, Hicks erected a row of almshouses in 1612, at a personal cost of £1300, a very large sum for the time. He gave £140 to maintain 6 poor men and 6 poor women in perpetuity. He lavished money on the church, giving a new roof, the churchyard wall, a bell, and many other gifts.

Hicks also built an opulent house beside the church, fronted by ornate lodges, at the huge cost of £28,000. Hicks' grandson, a staunch Royalist, ordered the house burnt during the Civil War to prevent it falling into the hands of Parliament. The gatehouse lodges remain, and within the high stone walls are a pair of Jacobean banqueting houses. Hicks and his wife are buried in St James Church.

If ever a historic building deserved to be called an icon, the pretty market hall in Chipping Campden is one. It is one of the most photographed and recognisable sites in the Cotswolds, along with nearby Broadway Tower and the almshouses on Arlington Row in Bibury. 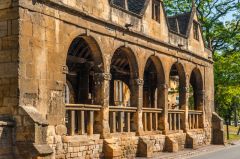 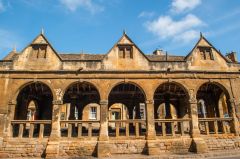 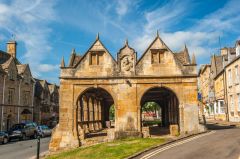 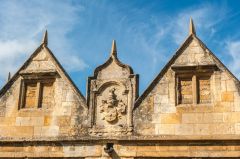 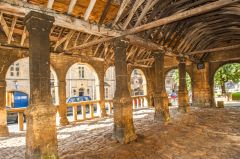