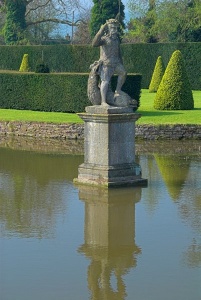 Westbury Court is a rare survivor of the brief English flowering of Dutch-style canal gardens. The Dutch influence first made itself felt when William of Orange became King William III in 1689. Dutch architecture became fashionable, and so did canal gardens. Most of the British examples of this style were swept away in the later passion for the informal landscape gardens of architects like Capability Brown and William Kent, but Westbury Court remains unchanged.

Westbury was first laid out around over the period 1696 - 1705 by Maynard Colchester. It may possibly have been influenced by the design at Flaxley Abbey only 3 miles away.

The garden consists of two long canals, one of which terminates in a cross canal, forming a T. About the canals are ranged hedges of yew and topiary arrangements in a formal pattern of balls and cones.

Low hedges and lawns were planted to create a restful atmosphere. Behind the formal garden area is an informal lawn area featuring a very old evergreen oak, reputed to be the oldest such tree in Britain. The garden also contains a number of trees and shrubs thought to date to the original planting of the gardens.

At the southwest corner of the garden is a Dutch style pavilion in red brick. This rises only one floor and is designed to create an informal room for guests to look out over the canals and across the garden to the far opposite corner, where a small summer house stands. 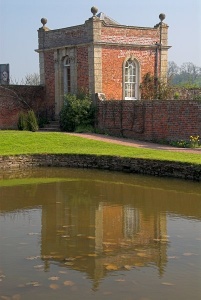 In the summer house are a collection of old prints by Kip, showing the layout of gardens in this area. The engraving of Westbury Court was used by the National Trust as the basis of their restoration of the gardens and it is fascinating to compare the original style of the garden layout with the restored version out the window of the summer house.

Westbury Court was the first garden restoration project undertaken by the National Trust, beginning in 1971. The replanting of Westbury was done solely with plant varieties known to have been in use in the 17th century, including early examples of fruit trees.

A very small walled garden features perennials of 17th-century varieties. Another feature is a vegetable garden planted with more 17th-century fruit and vegetables.

Beside the walled garden is a scaled-down version of a 17th-century rabbit warren. At that time rabbits were not the omnipresent countryside residents we see today; keeping rabbits, or 'coneys', was the exclusive right of nobility. Westbury Court would have had a very large warren, perhaps seven times the size of the one reproduced here.

The garden is located on the A48 at the northern outskirts of Westbury on Severn, 11 miles west of Gloucester. There is parking available at the gate, with level access to the gardens. While in the area, take the time to visit the historic church immediately beside the gardens. 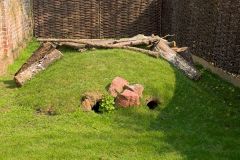 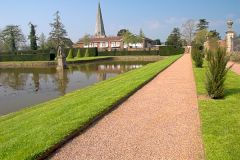 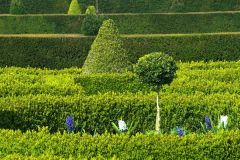 More self catering near Westbury Court