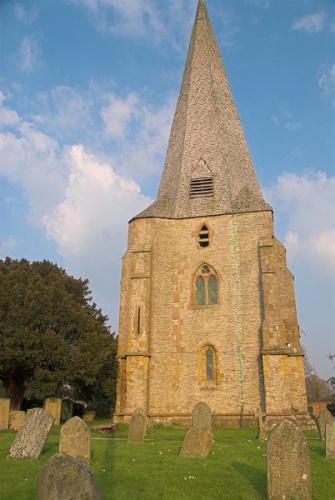 The name of this pretty church is a mouthful, with its dedication to three saints, but it's well worth a visit, especially given its location immediately beside the National Trust property of Westbury Court Garden. The church is an easily recognized landmark for miles around, thanks to the height of its detached bell tower, which reaches 160 feet.

The church was built in the late 13th century. The oldest parts still remaining are the north porch and north aisle, which were built in 1290.

The interior features a north aisle and rather narrow nave. The nave is filled with lovely Elizabethan pews decorated with linen-fold panelling. These were likely designed as box pews but later altered. Near the south door stands an intriguing font. The very plain bowl is Norman, but the pillar upon which it rests is Elizabethan, and this is decorated with extravagant carvings of Elizabeth I's coats of arms and heraldic beasts such as dragons.

The chancel is largely 14th century, with Decorated Gothic windows. Sadly there is no medieval glass remaining. Under the south window is an interesting rose shaped piscina with eight drain holes. Against the north wall is an amusing memorial to Frederick Wintle. The mason who carved the memorial was confused about geography, and put 'Asia' on the globe where 'Australia' should be.

Also in the chancel are a pair of brass chandeliers, probably made in Bristol around the year 1730. Immediately to the north of the chancel arch is a glass case which houses a bound copy of John Foxe's 'Book of Martyrs'. See our article on Buckland church for more on Foxe's opus.

Finally, at the very west end of the church is a mechanical clock, which dates to about 1720.

About Westbury on Severn
Address: Bell Lane, Westbury on Severn, Gloucestershire, England
Attraction Type: Historic Church
Location: Just off the A48. Limited parking along the lane beside the churchyard
Location map
OS: SO716138
Photo Credit: David Ross and Britain Express

Nearest Accommodation to Westbury on Severn:

More self catering near Westbury on Severn

More Hotels near Westbury on Severn

More bed and breakfasts near Westbury on Severn