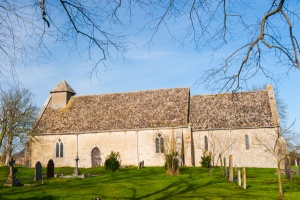 If ever a church deserved the label 'a quiet country church', this is it. This is a mainly 13th-century building consisting of a nave and chancel, looking across a medieval goose green. There is no porch, and no tower, just a small bellcote over the west gable.

What makes St Nicholas such a delight to visit is that it has remained structurally almost unchanged since it was built, with the exception of 14th-century diagonal angle buttresses. Also 14th century are a pair of windows in the south wall of the nave.

There is a late 15th-century window in the north wall but all the chancel windows are original 13th-century features. The nave roof is worth noting; it dates to 1708 and has a rather odd pendant decoration that looks for all the world like a carpenter's plumb-bob to my eye.

The chancel screen is worth a mention. This odd arrangement caught my eye almost immediately on entering the church. I call it a screen, as I'm not really sure what other term to use, but it looks like a narrow chancel arch flanked by two very large squints, the northern one split into two sections, and the southern one giving way to a set of stone steps that used to lead to the rood loft. I've never seen this sort of screen in a church before. 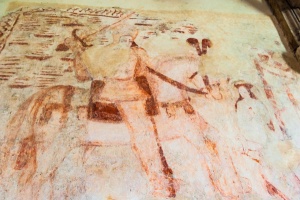 The easternmost window on the south wall of the chancel drops down to form a single-seat sedilia, with an angle piscina. This is a beautiful bit of 13th-century work, as is the plain stone font with an octagonal basin. There is a nicely carved Jacobean pulpit, set atop a modern stone base. The church doors still retain their original ironwork hinges and decoration.

But the real star of the show at Baulking is a series of 14th-century wall paintings on the north wall, opposite the entrance. Like so many works of medieval art, these lay hidden under coats of plaster since the Reformation, until they were uncovered during repairs to the nave in the 1980s.

The clearest figure is a very large knight on horseback, his sword raised high as if about to strike. Before him stans a much smaller figure of a woman with an animal, perhaps a dog or a lamb.

Baulking seems like a village lost in time, and so does the church. I loved it! 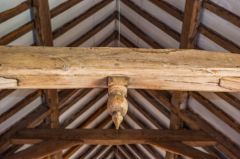 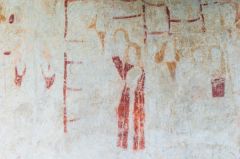 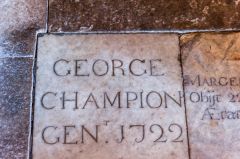 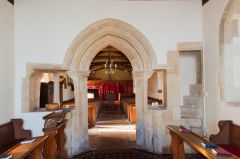 More self catering near Baulking

More bed and breakfasts near Baulking