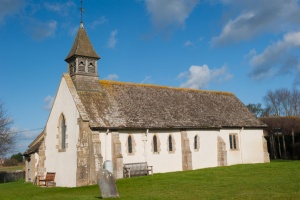 If any Oxfordshire can be called an undiscovered gem, perhaps All Saints, Goosey, qualifies best. This tiny 13th-century church began as a chapel for the monks of Abingdon Abbey who tended the abbey's flocks of geese.

The name of the village tells the story; 'goose' is obvious, and the 'ey' suffix refers to an island. In the medieval period, this area was low lying, and the geese were kept on a piece of marginally higher ground rising above the surrounding wetlands.

How did monks of Abingdon end up here? Well, for the answer we have to back in time to the late Saxon period when King Offa of Mercia was the most powerful lord in the land. The abbey owned an island in the Thames, but Offa coveted the land.

Around 785 AD he persuaded the Abbot of Abingdon to exchange his island for a patch of marshy ground south of Faringdon. The abbot, being no fool, and rather partial to keeping on the good side of the king - and keeping his health - agreed to the exchange. He may have lost an island but he gained land where waterfowl like geese nested, and what is more, it was land where dairy herds could safely graze.

Though he might not have thought so at the time, the exchange was actually a rather good deal for the Abbot! He set his monks to raise flocks of geese and began to raise cattle on the estate. There were dairies at what are now Abbey Farm and Church Farm, and a cell for the monks at Abbey Farm. 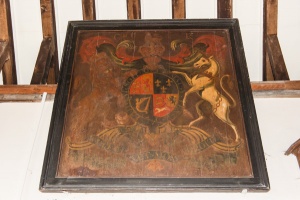 Shortly after their arrival the monks built a chapel where All Saints stands. Of that Saxon church no trace remains, and much of what we can see today is 13th century and later. The building is extremely simple, with a very small nave and even smaller chancel. There is no tower, simply a small bellcote at the west gable. The treble bell is the oldest in the county, forged by Joseph Carter of Reading in 1599.

Beside the path that leads to the door is a truncated cross set upon a base. These are both of quite ancient origins. The cross shaft was for many years used a sill for the main church door. The door itself is 15th century. Above the door on the interior of the church is a royal coat of arms to George III. 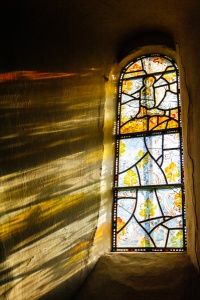 Medieval glass in the nave

The oak-panelled pulpit is older, probably Jacobean, and nicely, if simply carved. There is no chancel arch, and as a result the narrow chancel seems even smaller than it is - no mean feat! The chancel boasts three Perpendicular windows, probably brought to Goosey from elsewhere.

The colourful Victorian stained glass in the east window was a gift of Christopher Wordsworth, Bishop of Lincoln, who served as a vicar at Goosey and Stanford in the Vale from 1850-1869. On either side of the altar are 16th-century wooden panels inscribed with the Ten Commandments.

The window in the north wall nearest the chancel is 12th century and contains fragments of medieval glass which were originally in the east window. The nave roof is supported on four 13th century carved stone corbels. The figure in the south-east corner is thought to represent King Offa, while the others appear to be a monk, a lady, and a bishop.

Goosey's little church is not striking or exceptional; but is is a wonderful example of the sort of small country churches that lie scattered up and down the land and have served their communities for hundreds, or in some cases, over a thousand years. 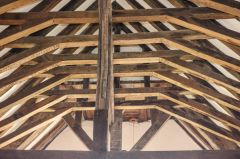 About Goosey
Address: Off Goosey Lane, Goosey, Oxfordshire, England, SN7 8PE
Attraction Type: Historic Church
Location: On the edge of the wide village green. Turn up the single track drive by the post box. There is a small parking area for a few cars. Use SN7 8PE for satnavs.
Location map
OS: SU356916
Photo Credit: David Ross and Britain Express

More self catering near Goosey

More bed and breakfasts near Goosey