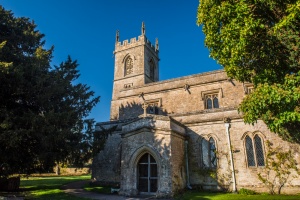 St Nicholas Church in Chadlington, Oxfordshire sits in a designated Area of Outstanding Natural Beauty, looking south to the River Evenlode, surrounded by pretty cottages of Cotswold stone. The church dates to sometime around AD 1100, but the remnant of a Saxon arch in the nave is clear evidence of a much older church on the same site.

The Eynsham Abbey Rolls for 1197 refers to a chapel in Chadlington, so at some point following that date, the chapel must have become a fully-fledged parish church. The church we see today retains Norman stonework, with later Early English rebuilding.

The most interesting external feature is an array of gargoyles and grotesque carved heads adorning the chancel and roofline. Not all the carved heads are grotesque; indeed, not all are ancient. The large east window has carved heads depicting Queen Victoria to the south and the Bishop of Oxford, Samuel Wilberforce to the north. This is typical Victorian symbolism, with the representatives of church and state balancing each other. 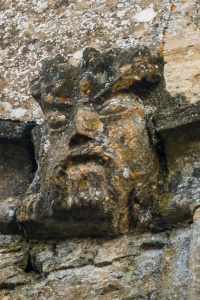 On the east wall of the nave, high above the chancel, is a large carving of a Green Man, with foliage flowing from his mouth. Take a good look, for at first glance it just looks like a man with a large moustache! This type of Green Man is what is termed a 'Tree Nose' depiction, because the figure's head is made of leaves while the tree trunk descends to form his nose.

The original Norman church consisted of a chancel and nave. In the 13th-century aisles were added in Early English style - look for the pointed arches in the nave arcades. The bell tower was added in the 14th century, in a more elaborate Decorated Gothic style. The tower is unusual in that the east wall extends into the nave itself, creating an odd projection inside the west end of the building.

In the middle of the 14th century, a chapel was added, and still later a high clerestory in Perpendicular style was built to admit more light to the interior. In 1870 Charles Buckeridge was called in to rebuild the ageing church in Victorian Gothic.

The chancel is almost entirely Buckeridge's work, and features beautiful floor tiles. At the same time a coal-fired boiler was built in a crypt under the south aisle.

Since the church had no direct water-supply, a header tank was installed in the tower clock-chamber. The tank had to be filled with water carried in buckets up the spiral stair that winds up inside the tower. Pity the poor water-carriers! 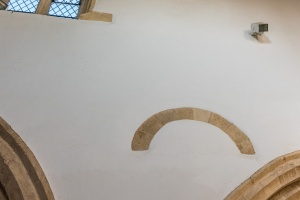 A Saxon arch in the north arcade

Inside, look for the deeply splayed Early English windows at the west end of each aisle. The late 12th-century arcades are in slightly different styles - perhaps each arcade was given to a different mason to complete? Both north and south aisles have a 15th-century piscina, suggesting there was an altar in each aisle.

The most obvious remnant of an earlier church on the site is a round-headed arch set into the north nave arcade near the pulpit. Nearby is a small hole piercing the chancel arch. This allowed a Gospel reader in the rood loft to see the high altar during services.

There are very few memorials of note in the church. Two in the chancel stand out; one is to Joseph Rollinson (d. 1699), while opposite is a marble monument to Sir William Osbaldeston (d. 1740) and his wife, Lady Catherine Osbaldeston (d. 1737).

One final feature deserves a note. In the east end of the churchyard is a rather striking memorial to Frederick Schofield and his two wives. The memorial takes the shape of an ornate winged angel, which really stands out in a graveyard full of table tombs and simpler headstones.

To the best of our knowledge, St Nicholas is open daily. I've visited Chadlington church on two occasions so far and enjoyed the experience enormously. You can sit in the churchyard on a sunny afternoon and feel like you're a million miles from anywhere; a sense of peace and timelessness clings to the village and the church. 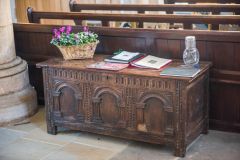 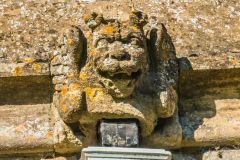