HERITAGE HIGHLIGHTS:   Superb memorials to the Lee and Dillon families of Ditchley Park 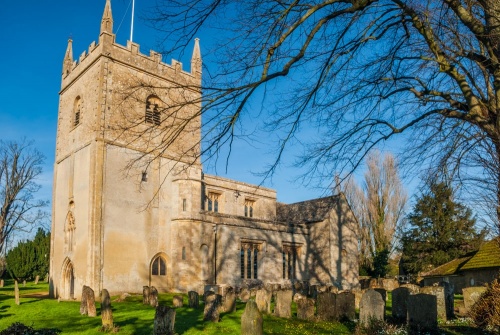 There is thought to have been a church here in Saxon times, but no trace of this early building remains. What we see instead is a Norman building, dating from the late 11th and early 12th centuries. The oldest parts of the building are the west tower and the pillars that support it. The tower was almost certainly part of a much larger cruciform church which was later shortened considerable, leaving the tower at the west end.

The nave and aisles are 13th century, in lovely Early English style, while the transepts are 14th century and most of the windows are Perpendicular work, from the 15th century. In the 18th century the Lee family, Earls of Litchfield, who owned nearby Ditchley Park, rebuilt the entire church.

The 1st Earl rebuilt the bell tower in 1706, the 2nd Earl took on the nave around 1740, and the 4th Earl rebuilt the nave, aisles, and transepts in 1774. The Dillon family succeeded the Lees as Viscounts of Ditchley, and it was the Dillons who again rebuilt the chancel in 1851 in typical Victorian Gothic style.

Part of that Victorian rebuilding included adding four large arches to house exquisite monuments to the Lee family. And it is the monuments that rightly get most of the attention at Spelsbury, for they are superb. 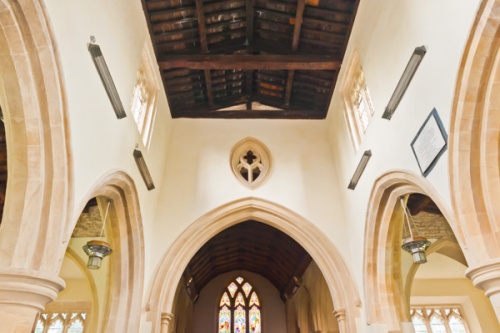 The nave and chancel arch

On the north chancel wall is a memorial to Sir Henry Lee, 1st Baron of Quarenden (d. 1631), with his wife Eleanor (nee Wortley). Their effigies are surrounded by kneeling figures of their four children, while lying flat on the table are three more figures of children who died in infancy.

This tomb was carved by Samuel Baldwin, a Gloucester sculptor. The church guide describes it as 'a Jacobean masterpiece', and I agree. The memorial is of alabaster with epitaphs carved on grey limestone, decorated with black marble, and inscribed with heraldic designs. At the top are the Lee family arms flanked by figures representing Death and Time, above which flies an angel playing the flute. It is truly a stunning work of art. 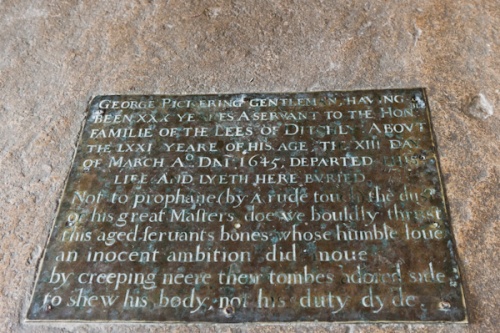 On the south chancel wall is another Lee monument, this time to Sir Edward Henry Lee (1663-1716). Sir Edward was the 1st Earl of Litchfield, a title he gained after marrying Charlotte Fitzroy, the illegitimate daughter of Charles II and his mistress, Barbara Villiers, Lady Castlemaine.

We don't know who the sculptor is, but the tomb is magnificent, crafted from Carrara marble in Baroque style, on a limestone plinth. The inscription tablet is of solid white marble, below a cornice with arms of both the Lee and royal Stuart families.

On the south wall of the chancel, near the altar, is a memorial to Sir George Henry Lee (1718-1772), the 3rd Earl Litchfield, and his wife Diana (nee Franklin), who died in 1779. This superb piece of neo-classical sculpture was the design of Henry Keene, carved by William Tyler.

Again using a limestone base, this ornate tomb makes use of several colours of marble, with an oval recess depicting a pair of urns encircled by a serpent, the symbol of immortality. Above is a grey marble pyramid. 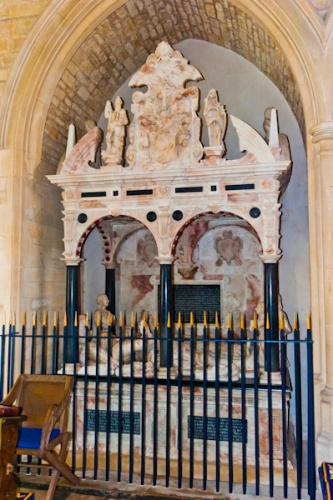 On the north chancel wall opposite is a monument to the 4th Earl Litchfield, Robert Lee (1706-1776). This time William Tyler both designed and sculpted the tomb, and again he used different coloured marble. This design shows the Earl's casket supported on lion's paws beneath an urn of jasper and a pair of white marble cherubs. The base has a grey Carrara marble tablet with the Earl's glowing epitaph, and above is a black marble pyramid.

These are the major tombs, and though I could go on about how impressive they are, really the only way to do them justice is to see them in person! 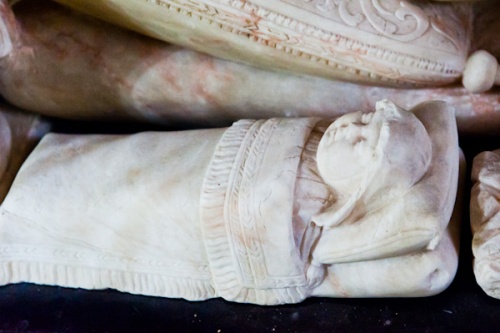 The 2nd Earl of Rochester

There is one person buried at Spelsbury whose fame far outstrips those of the Lee Barons and Earls. That is John Wilmot, the 2nd Earl of Rochester, a famous - or perhaps one should say, infamous - libertine at the court of Charles II.

Rochester was a poet and 'the' wit of the Restoration court, but he was also a man known for his debauched lifestyle. His poetry is notorious for its bawdy nature, but perhaps his most famous verse was one he wrote on the door of King Charles' bedchamber:

Here lies our sovereign Lord the King
Whose promise none relies on
Who never said a foolish thing
And never did a wise one.

Charles, when he heard the verse, replied that while his words were his own, his deeds were those of his Ministers. 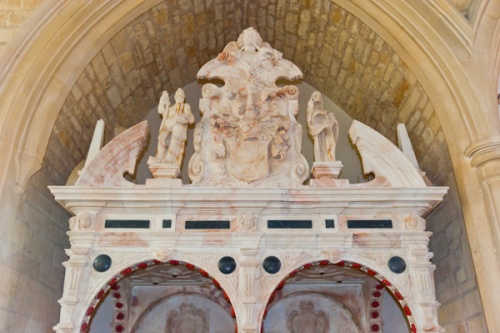 Rochester has no memorial; he is buried simply in the Lee family vault beneath the north transept. However, the brass plate from his coffin, along with plates from other coffins buried in the vault, is set on the wall of the tower, just inside the west door.

Here are a few more interior highlights:
On the north chancel wall is a brass to George Lee, 2nd Earl of Litchfield (d. 1742). In a recess in the north transept is a beautiful memorial to Charles, 14th Viscount Dillon (d. 1865). This is a lovely piece of Gothic Revival sculpture carved by GF Fuller. The 13th Viscount has a neo-classical wall tablet in the north aisle, built of white marble. This is carved by Thomas Gaffin, a popular 19th-century sculptor.

Just before the chancel steps is a brass to George Pickering (d. 1645), who was a servant to the Lees of Ditchley for 30 years. Under the aisle windows are wooden panels made from 18th-century box pews.

I came to Spelsbury at the very end of a long day touring churches in north Oxfordshire. My camera was running out of battery life from photographing all day, and I had only 15 minutes before the church was due to close, according to the notice outside. Not ideal, then, for a relaxing visit. But once I entered the church I was transported.

The Lee and Dillon family tombs are absolutely stunning, one of the most enjoyable sets of monuments of any church in Oxfordshire. The combination of the memorials and the idyllic church setting created an indelible memory. It is worth going out of your way to visit this delightful country church. And make sure your camera has lots of battery life! 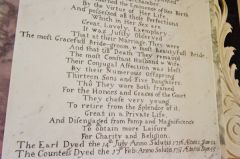 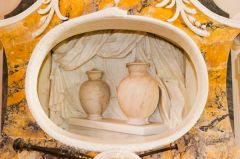 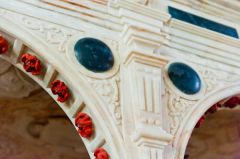 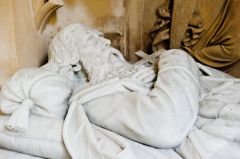 More self catering near Spelsbury

More bed and breakfasts near Spelsbury