The major interest for visiting Shorthampton is the remarkable collection of medieval wall paintings which seem to cover the nave of this small country church.

The parish of Shorthampton is officially The Parish of Charlbury with Shorthampton. This joint designation dates back to the 7th century when a minster church was established at Charlbury by St Diuma.

Charlbury's minster parish covered a large area which included Shorthampton. Over the centuries which followed the founding of Charlbury minster, the parish was broken up, but Shorthampton remains part of the Charlbury parish over a millennium after it was founded.

There is little enough of Shorthampton itself; beyond the church, there is a small house or two and a few farm buildings, but that's about it. The location is wonderful, with views out over the wide Evenlode valley towards Chipping Norton. 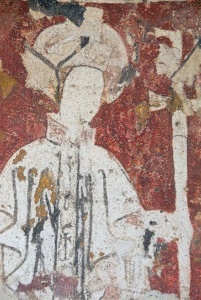 Painted figure of
an archbishop

The church itself was built sometime in the 12th century and may have been only a single cell. To this, a chancel was later added, and the current chancel arch is 14th century. In the 15th century, the church was enlarged, and the south wall moved out by 6 feet to allow for a new nave altar.

To allow parishioners to view the main altar in the chancel a large squint was added to the south of the chancel arch.

Unusually for this area, All Saints does not have a tower; it is a very small church consisting of a nave and chancel, south porch, and bellcote. When you enter via the south door, two things strike you at once; one is the small size of the church, the other is the wonderful collection of wall paintings.

Opposite the south door is a round-headed door, now blocked, which dates to the founding of All Saints in the 12th century.

For a small church Shorthampton may have more medieval wall paintings than any other I have visited. The nave is quite extraordinarily rich in medieval paintings; some are fragmentary, but many others are very clear and well preserved. St Zita wall painting
A few highlights of the paintings:

These are just the highlights of what is really an extraordinary collection of medieval art at Shorthampton, especially given the small size and isolation of the church.

Other Heritage Highlights
The font is a very nice Norman tub, though it is unadorned with any carvings. More self catering near Shorthampton

More bed and breakfasts near Shorthampton