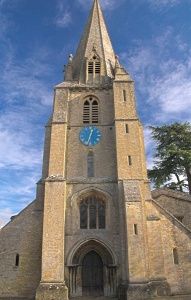 Summary
A lovely 13th-century church, with many Early English features, a font given by the Earls of Warwick, 16th-century memorials, and a pulpit carved from a single piece of stone.

St Mary the Virgin, Shipton-under-Wychwood, stands on the site of a Saxon minster, but the church we see today is largely 13th century. The oldest part may be the tower, which was begun around the year 1200. The chancel arch is late Norman, and the two-story south porch was added in the 14th century.

One of the most fascinating historical features of the church is the font. This is octagonal, with intriguing motifs on each facet. One motif shows the bear and ragged staff emblem of the Earls of Warwick, suggesting that the font was a gift to Shipton of the powerful Earls.

Another motif shows the 'rose en soleil' a sun and floral emblem combined, that was used by Edward IV. These two motifs suggest a date of 1461-1470. Three other facets show Green Man motifs. The Green Man, or grotesque face surrounded by leaves, was a common medieval symbol, probably a relic of pagan times. 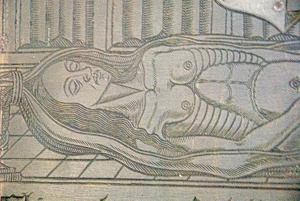 Another feature is the stone pulpit, which is likely 15th century. It was carved from a single block of stone, though there has been obvious repair work since. Tucked behind pews in the north aisle is a recessed tomb, in which is the much-worn effigy of a woman in 14th-century garb.

On the wall of the south aisle is a beautifully engraved brass palimpsest, commemorating Elizabeth Thame (d. 1548). Loosely defined, a palimpsest is communication medium, like a manuscript, tablet, or book, that has been reused. In this case, the memorial brass was originally used to inscribe a 1494 grant to the Guild of St Mary in Aylesbury by John and Alice Stone.

The brass was later turned over and reused as a memorial to Elizabeth Thame. The engraving shows the skeletal deceased woman lying in her shroud beneath her coat of arms. Beside the brass is a copy of the other side of the palimpsest. 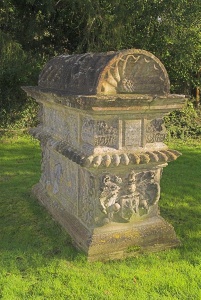 High on the north wall of the chancel are two 18th century marble monuments to members of the Reade family of Shipton Court. Above the south door is a hatchment of the Reade family. A hatchment is a coat of arms, usually painted on a diamond-shaped piece of wood or canvas.

This particular hatchment probably dates to 1821, and it was lost for a century in the attic of an antique shop in Burford until it was rediscovered, carefully restored, and returned to St Mary's church.

One very unusual feature is to found in the sanctuary. Set into the south wall of the sanctuary, a few steps from the altar, is a medieval piscina, a sort of washbasin for cleaning holy vessels or the priest's hands.

Set into the wall immediately above the piscina is a small, beautifully carved memorial, dated 1614, to Timothy Stamp, his wife, and four children. In a common pose for the period the husband and wife are kneeling in an attitude of prayer, facing each other across a small table, or altar. Vestiges of colourful paint still cling to the alabaster likenesses. Though such a tomb is quite common, it is rare for one to be located immediately above a piscina.

In the churchyard is a two-story table tomb. Though table tombs are quite common in this area, 'double-decker' versions are unusual. In one famous local case, smugglers hid their contraband in a hollow in the base of a two-storey table tomb. From beside the tomb, you can see over the rear wall of the churchyard to Old Prebendal House, a Grade II listed manor house dating to the medieval period. 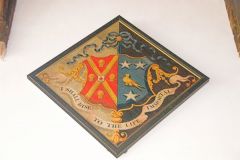 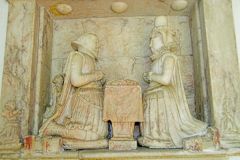 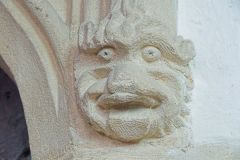 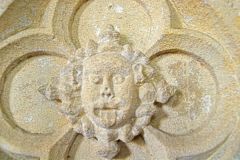 Nearest Accommodation to Shipton under Wychwood:

More self catering near Shipton under Wychwood

More Hotels near Shipton under Wychwood

More bed and breakfasts near Shipton under Wychwood