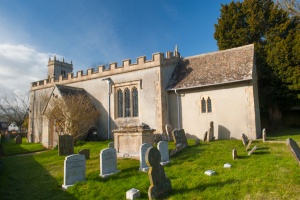 We do not know when the first church was built at Charney Bassett. Certainly, there were Christian communities nearby as early as the 7th century, so it is not unlikely that there was a similar settlement here, with a church built of wood.

Sometime in the first part of the 12th century, that earlier church was replaced by a Norman building of stone, probably on the same site. That first Norman church was much smaller than the current building, and only parts of it survive in the south wall of the nave. Ah, and two other parts worth more than a passing mention.

The first is the Norman south doorway. This is a delight, with a band of carved beast heads, each one unique, arranged around the rounded arch. Each of these beasts has leaves, or foliage flowing from its mouth; a traditional style associated with depictions of the Green Man, or wild man of the woods. The date usually ascribed to this doorway arch is 1120-1140.

And now we come to the second surviving Norman work. Or is it Norman? Is it perhaps far older? For there is a mystery at Charney Bassett, a mystery that is set above a doorway in the north wall of the chancel. 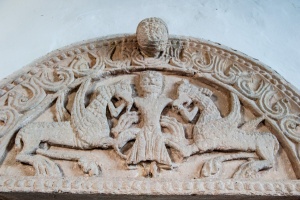 There above the chancel doorway is a carved tympanum, wonderfully incised with vivid figures. The tympanum is traditionally described as 12th-century work, but is it, or is it a remnant of centuries earlier Saxon work?

The carving shows two winged beasts like dragons facing each other and flanking a figure of Christ. Around the central semi-circle is a band of what looks like acanthus leaves. In the centre of the arch is a boss, protruding from the surface of the stone like a halo above Christ's head.

Opinions on the Charney Bassett tympanum

The very readable church guide reprises five opinions given by scholars about the tympanum. One scholar categorically states that it belongs to the first half of the 12th century, based on the fact that the flanking beasts are dragons, which did not really become popular in church carving until that time.

The second opinion is completely in disagreement and finds the tympanum to be almost certainly Saxon, calling the dragons Norse in style, and suggesting that dragon depictions, especially facing each other towards the centre of the tympanum, had almost completely died out before 1100.

Another scholar suggests that the 'dragons' are winged beasts bearing Jesus up to heaven, while another points to a similar carving at Reading Abbey, dating to 1120-1140. Who to believe if the scholars can't make up their minds?

Well, I'm no scholar, but my very first impression of the Charney Bassett tympanum was that it was much, much older than the mid-12th century. I've seen a lot of Norman and Saxon carvings in parish churches around the country and if I had to wager I would have said it was late Saxon. But as I say, I'm not a scholar, only an avid enthusiast!

Does it matter? Well, no, not really; the main thing is that it is a beautifully vivid ancient carving, full of life and detail, and well worth a trip to see. 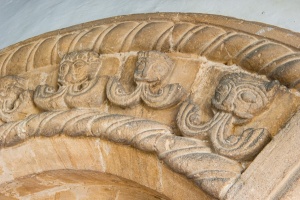 What of the rest of St Peter's church?

The roof is probably 15th century, of tie-beam construction. The simple stone font is probably 13th or 14th century. The panelled pulpit is nicely carved, as is the later wooden chancel screen. The bellicose over the west gable is possibly Jacobean, of a rather curious design.

The name Charney Bassett is a combination of ancient terms for an island in the Charn (Charn being an earlier name for the River Ock). The Bassett part of the name is a subject of some dispute. It may refer to Ralph Bassett, a 12th-century landowner and one-time Justiciar of England. The name occurs further south in the twin villages of Letcombe Bassett and its neighbour, Letcombe Regis (owned by the crown).

Beside the church is a large manor house, known as Charney Manor. The name is deceptive, for this manor house began as a grange owned by Abingdon Abbey. It was the residence of the abbey's bailiff or steward, whose job it was to administer the large abbey estates around Charney. 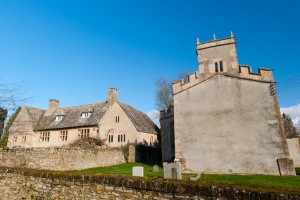 West gable and Charney Manor
But we know that the Abbot of Abingdon came to Charney in 1322, and it is more than possible that the little church was 'prettied up' for his visitation. For a window in the chancel wall dates to that time, and the west wall extended. In the 15th century the church was enlarged still more, and the current east window inserted. The window retains some fragments of 15th-century glass. At the same time, the current chancel arch was inserted, and the pulpit installed.

Though the church was owned by the abbey before the Reformation, there was no priest; St Peter's was a chapelry under nearby Longworth. That meant that residents of Charney had to pay tax to keep up Longworth Church, even though they had no direct benefit from the arrangement. The 'Longworth tax' continued to be paid until the middle of the 19th century. 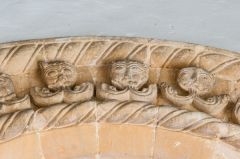 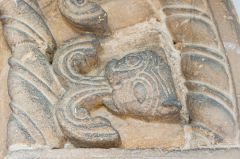 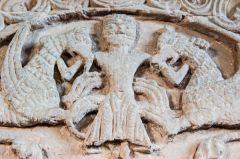 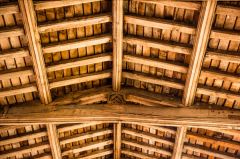 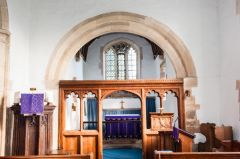 More self catering near Charney Bassett