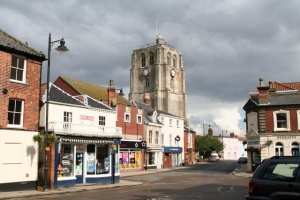 Summary
It could be said that the best days of Beccles were over a thousand years ago when this market town was a prosperous Saxon port, but that would be terribly unkind, for Beccles has a lot to offer a modern visitor. The town lies at the southernmost extremity of the Norfolk Broads, though the town itself is across the county border in Suffolk.

What to see
Beccles suffered from extensive fires in the 16th and 17th centuries, and much of the oldest parts of the town were destroyed. As a result, most of what can be seen today dates from the Georgian period and later. An exception to this is the Tudor manor of Rose Hall (alternately spelled "Roos" Hall).

The parish church of St Michael's is a lovely building, with a humorous legend. The quick-witted visitor (this means you!) will notice that the church tower has clock faces on only three sides. Local legend has it that the west side, facing Norfolk, was intentionally left blank because the inhabitants of Beccles did not want to give the time for free to their neighbours in Norfolk!

The church was built in the years 1350-1400 by the Abbots of Bury St Edmunds. The unusual detached tower was begun later, in about 1500. The bulk of the church is in the Decorated style, with the tower being more in the Perpendicular vernacular.

The church was badly burned by a fire in 1586, with the result that the hammer-beam roof lacks some of the beauty of its Suffolk neighbours. The elaborately carved Chancel Screen dates from 1919. The Chancel itself is largely Victorian, with beautifully carved choir stalls.

We know that there was a settlement at Beccles at least as early as the year 960, when King Edwy granted it to the Monastery of St Edmundsbury. By the time of the Domesday survey (1086), the Abbot of St Edmundsbury paid a rent of 60,000 herrings to the crown, emphasizing the rich fishing to be had in the region.

At that time the holding of Beccles stretched to only 10 acres, but by 1391 over 1400 acres had been reclaimed from the surrounding marshlands through a gradual program of drainage.

The name "Beccles" comes from a combination of two words; "Beck", meaning "stream", and "Leas", meaning meadow. So, loosely translated, Beccles is the "meadow by the stream".

Beccles hosts an annual regatta on the first weekend of August.

More self catering near Beccles

More bed and breakfasts near Beccles

Self Catering near Beccles