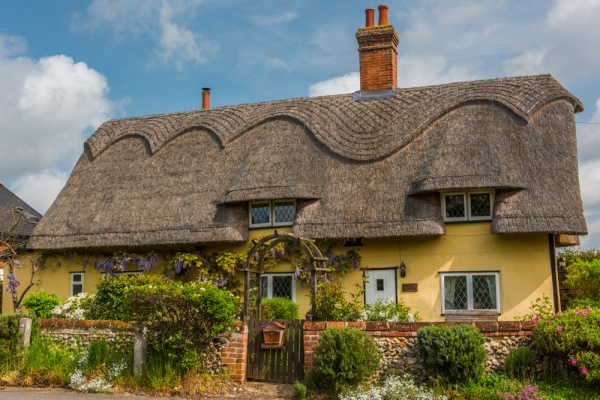 A thatched cottage on the green in Redgrave

Redgrave is a pretty village just inside the Suffolk border with Norfolk, a few miles west of Diss. The village was mentioned in the Domesday Book of 1086, when it was owned by St Edmundsbury Abbey in Bury St Edmunds and is recorded as having 30 acres of land plus woodland to support 120 pigs.

The village is centred on a large green known as The Knoll, ringed by attractive thatched cottages. There are 50 listed buildings in the village and most of them are thatched. 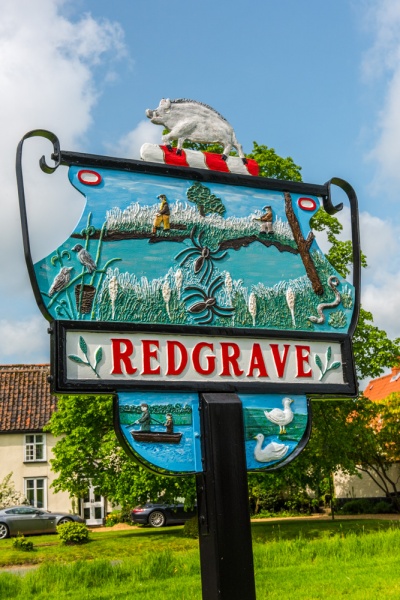 St Mary's dates to the early 14th century and replaced an earlier Saxon church on the same spot. The interior is home to the largest collection of funeral hatchments in Suffolk, and a superb 1609 brass to Anne Butts. Cardinal Thomas Wolsey, Henry VIII's powerful chancellor, was rector of Redgrave in 1506, though it is doubtful if he ever visited 'his' church.

St Mary's has been redundant for many years and is under the care of the Churches Conservation Trust. Rather than just letting it sit empty the Redgrave Church Heritage Trust have made St Mary's into a venue for concerts, exhibitions, lectures, and other public events. 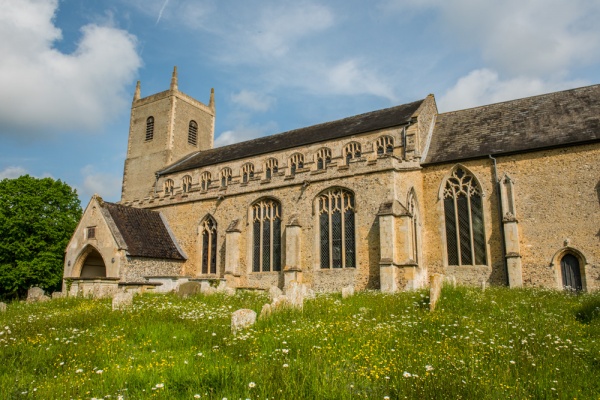 Just north of the village is the Redgrave and Lopham Fen, now a nature reserve and the home of a very rare Raft Spider. Before it became a protected habitat the fens were used as a supply of Norfolk reeds for thatching local buildings. The spider likeness appears on the village sign on the green under a boar, the symbol of the Bacon family, for many years lords of the manor.

Outside the village to the south-east is Redgrave Park, 250 acres of parkland and water once owned by the Abbot of Bury St Edmunds, who had a hunting lodge here as early as 1211. After the Dissolution of the Monasteries, the Park passed into private hands and Sir Nicholas Bacon built a mansion known as Redgrave Hall to replace the abbot's lodge. St Mary's church is full of memorials to generations of the Bacon family.

In 1702 Sir John Holt, Lord Chief Justice of England, purchased the Park. In the 1760s his great nephew rebuilt the Hall and called in Capability Brown to landscape the Park. The Hall was torn down in 1947 and much of the former landscaped parkland is now used for farming.

In the park is Keeper's Cottage, a former keeper's lodge possibly designed by Capability Brown. Another historic house worth mentioning is Pink Cottage on The Street, a timber-framed thatched house built in the late 15th century.

One of the earliest lords of the manor on record is Earl Ulfketel, who held the manor in AD 1000. Ulfketel led the resistance against an invasion of Danes under Swein Forkbeard in 1004 but later perished in the pivotal Battle of Ashington in 1016, when King Cnut, Swein's heir, took control of England. 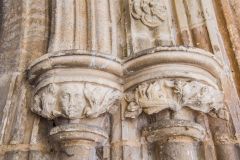 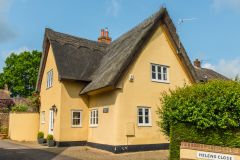 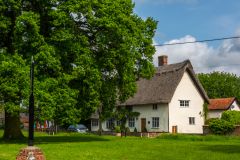 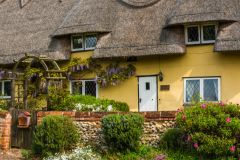 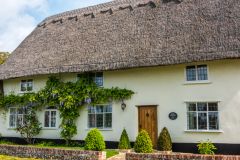 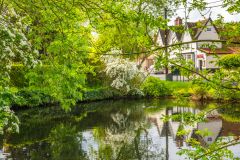 More self catering near Redgrave

More bed and breakfasts near Redgrave