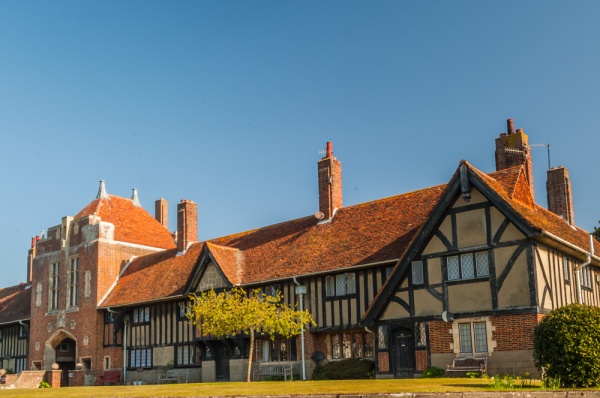 The Almshouses in Thorpeness

The Suffolk village of Thorpeness has been described as Neverland, a fairy tale holiday village on the coast that owed its existence to one man's extraordinary vision of a paradise for children and 'the home of Peter Pan'.

The story of Thorpeness as we know it today goes back to 1859 when a Scottish railway engineer named Alexander Ogilvie purchased Sizewell House as a holiday home on the coast of Suffolk. Over the ensuing four decades Ogilvie extended his property to include a huge swath of land on the Suffolk coast, stretching from Dunwich to Thorpe, and inland to Leiston and Aldringham.

Ogilvie's estates covered some 6000 acres by the time he died in 1908 and the estates passed to his son Glencairn Stuart Ogilvie, a successful architect, playwright, and lawyer.

In 1910 severe storms flooded the area around Ogilvie's mansion at Thorpe village, now called Sizewell Hall. According to a later tale, Ogilvie looked out at the flooded fields surrounding his house and had a 'Eureka!' moment. 'Let's keep it,' he said, 'and build a holiday village around it'. 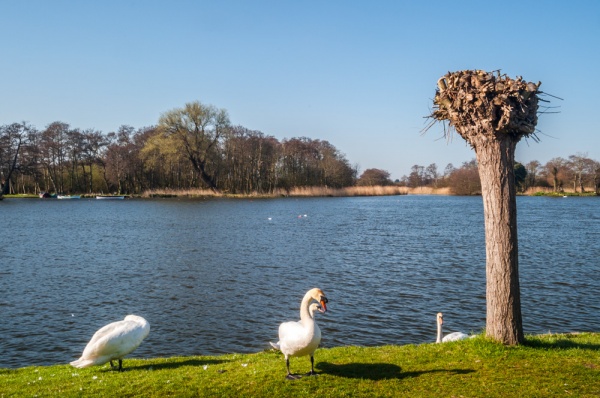 Swans on the bank of The Meare

And so he did, blocking the flooded Hundred River permanently to create a 64-acre Meare. Ogilvie changed the name of the village from Thorpe to Thorpeness to distinguish it from other villages in East Anglia named Thorpe, and created a fantasy holiday village for the upper middle classes. The long sandy beach was lined with holiday cottages designed by architects William Gilmour Wilson and Frederick Forbes Glennie, and mock Tudor and Jacobean houses were erected in a natural coastal setting of sand, heather, heath, and gorse.

The flooded fields became a boating lake dug out by hand - not as big a job as it sounds for it is less than 3 feet deep throughout. Ogilvie's vision was that even very young children would be able to learn how to sail, row, and punt in relative safety.

The Meare is dotted with Peter Pan themed islands with ornamental gardens, and children's' adventure areas like The Blue Lagoon, Spanish Main, and treasure islands. There is even a crocodile - thankfully neither breathing nor ticking - hidden amongst the trees. There are boats of all sorts to hire, including canoes, kayaks, and sailing boats. In 1912 a regatta was held on The Meare, and it is still held annually each August, in a festival capped by fireworks over the water. 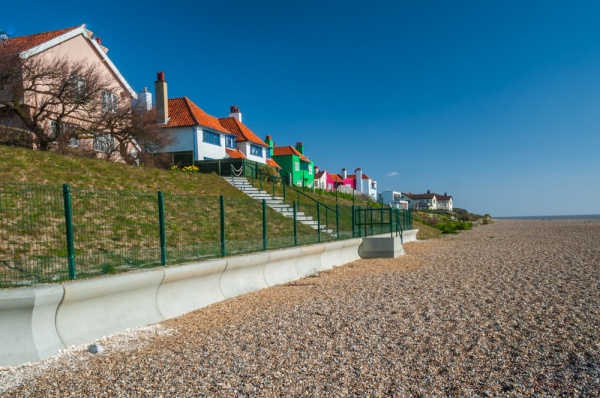 Houses on the beach at Thorpeness

From an obscure fishing village with just a few lonely cottages, Thorpe was transformed into a fantasy holiday village, with Tudor cottages, a country club known as the Kursaal, with tennis courts and an 18 hole golf course.

Thorpeness was much more than an entrepreneurial venture; Ogilvie was an idealist and wanted to create a place based on the 'garden city' concept invoked by Ebenezer Howard, a place for people to live in harmony with nature, to grow and learn in a healthy natural environment, a place where traditional family values held sway.

In order to make his holiday village a success, Ogilvie needed rail access. In 1914 Thorpeness Halt was opened on a branch line from Saxmundham. The 'station' was created using disused Great Eastern Railway coaches, which remained in use until Thorpeness Halt was closed in 1966. The platform still survives, though it is now overgrown, and can be viewed from a public footpath. A long-distance trail follows the course of the branch line between Leiston and Aldeburgh.

Large houses for the wealthy were built overlooking The Meare and smaller bungalows in other parts of the village. The existing Crown Inn was enlarged and renamed The Dolphin Hotel. The Dolphin was burned down in 1996 and rebuilt in its present form.

Opposite the inn was the workman's Club, later to become Ogilvie Hall. Across from the Workman's Club a row of almshouses were built to act as staff residences. A garage was built at the north end of the village, with facilities for all the cars which new residents and visitors brought. The first holiday homes were leased in 1912.

The Peter Pan theme of the village was more than just a marketing concept. JM Barrie, the creator of the Peter Pan stories, was a close family friend of the Ogilvies and visited Thorpeness on numerous occasions. 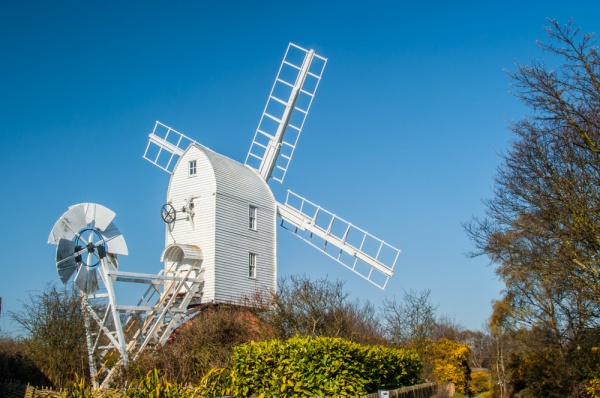 Water supply for all the new properties was provided by a water tower, with a large tank atop a slender pillar. The water was pumped from a well up to as holding tank at the top, then distributed by pipes to the various properties around the village.

Initially, water was pumped by an American style metal windpump, then in 1922 Ogilvie bought an existing post mill in Aldringham, used for grinding corn, had it disassembled and re-erected beside the water tower in Thorpeness. According to one tale, Ogilvie didn't think the metal windpump was suitably picturesque for his fantasy village and wanted a traditional English post mill that fit in with the style of his new village.

Thorpeness Windmill was driven by four patent sails, directed by a very large fantail. It worked until 1940 when the sails were replaced by a diesel engine. The mill finally went out of service completely around 1960 and was in danger of becoming derelict. It was rescued by the Suffolk County Council, who restored it and used it as a tourism information point along a coastal heritage path for many years.

The Council sold the windmill in 2010 to a local couple who wanted to restore it to full working order and open it as a community centre and tea shop. As of this writing, the mill is only rarely open, at the discretion of the owners, though it has opened for National Mills weekend in the past. 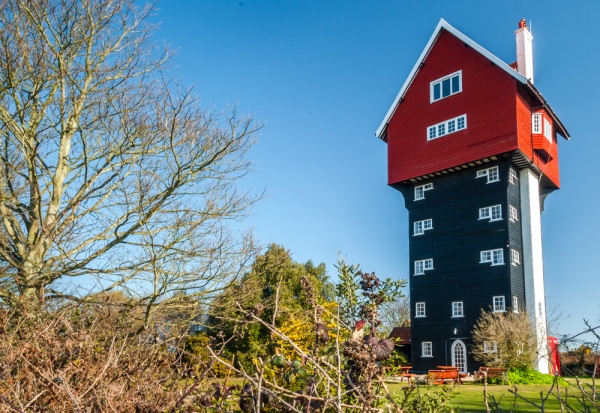 The House in the Clouds

The House in the Clouds

Shortly after the windmill was erected a friend of Ogilvie suggested that the 70 foot high water tower would make a good holiday cottage itself. Ogilvie liked the idea, and The House in the Clouds was born. It was built for a close family friend named Mrs Malcolm Mason, a writer of children's books. It was to be called The Gazebo, but Mrs Mason dubbed it The House in the Clouds, and so it has remained.

The central pillar supporting the water tank was surrounded by a timber framework to create an unusual house rising up five storeys to the tank, which was capped by a gabled roof to resemble a very unusual cottage, complete with a mock chimney and oriel window.

The House in the Clouds has since been remodelled and the water tank converted into a 'room at the top', offering perhaps the best view in Suffolk. The House stands in 1 acre of private grounds overlooking the golf course and Meare. It has five bedrooms, a dining room, and a drawing room, connected by a flight of stairs with 68 steps, with built-in landings at each floor level. It must be one of the most picturesque holiday cottages in Britain.

One of the most remarkable episodes in Thorpeness history occurred in 1943, when a V1 flying bomb passed directly through the water tank. Astonishingly, though the bomb caused tremendous damage, it did not wake up either of the two residents in the cottage below.

Thankfully, despite these changes, the village remains essentially as it was during the Olgivie's Edwardian heyday. The picture-postcard cottages still stand, and the House in the Clouds still draws gapes from visitors. Thorpeness is one of just two purpose-built holiday villages in Britain, the other being Portmeirion in Wales.

The village is surrounded by marvellous coastal scenery and a mix of heath and forested areas where wildlife abounds. It makes an excellent centre for walking, cycling, boating, and birdwatching. 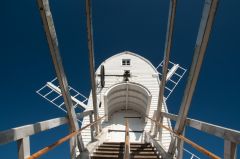 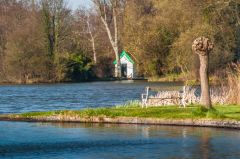 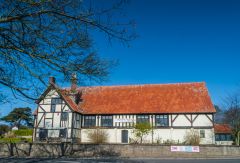 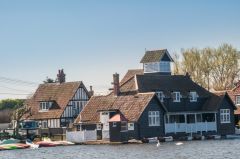 More self catering near Thorpeness, Suffolk