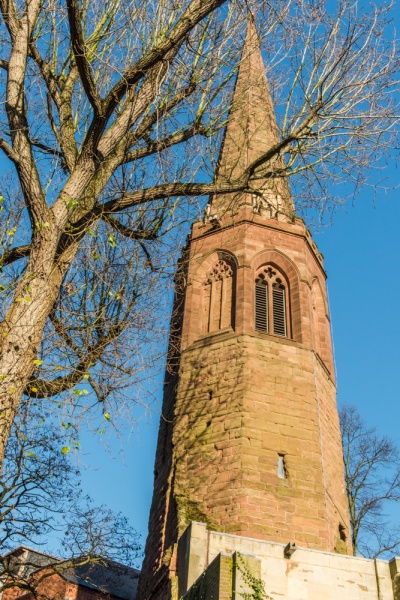 In the early 13th century the Earl of Chester, Ranulf de Blondeville, gave permission to monks of the Franciscan order to erect a friary on his Cheylesmore Manor estate in Coventry. The monastery became known as Greyfriars, after the grey colour of the robes worn by the Franciscan monks.

The first written record of Greyfriars comes in the court records of Henry III for the year 1234 when the king gave the monks timber to build their monastic church, or oratory. It is possible that the timber was used for roof shingles, or equally possible that the first church was built entirely of timber, then rebuilt in stone as funds allowed.

The Greyfriars estate was enlarged in 1289 when a later Earl of Chester, Roger de Montalt, granted more land. In exchange, he closed the route leading through their lands from Kenilworth to Coventry, and opened a new route nearby. 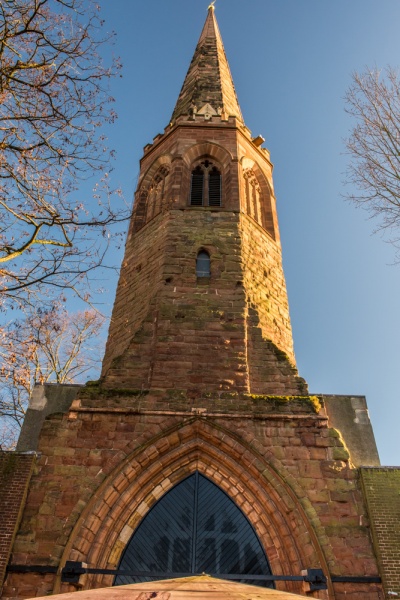 In 1359 Richard II gave the monks permission to take as much building stone as they wished from quarries on the Cheylesmore estate, which by then had passed to the crown. The king also allowed free passage for the monk's workmen and gave permission for them to dig earth for plaster.

One intriguing part of the charter shows that the king granted the monks additional permission to make a secret postern gate in the royal estate walls so that sick monks could walk in the royal park. The monks were not allowed to go further than the quarry and the key to the postern gate was guarded by the warden.

The result was a medium-sized monastic church, measuring 240 feet long and 60 feet wide. By comparison, the first Coventry Cathedral was roughly 460 feet long. The church was laid out on a cruciform plan, with a central tower and spire. By the time of the Dissolution of the Monasteries Greyfriars was bounded by Greyfriars Lane in the east, Cheylesmore Park on the south-east, Warwick lane on the north-west, and the city walls on the south-west. 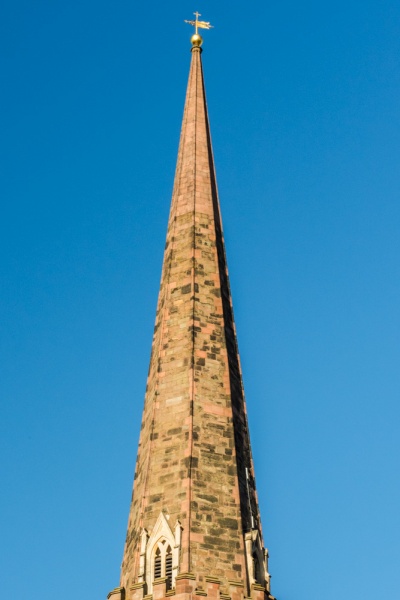 The top of the famous spire

The slender spire became one of Coventry's 'three spires', along with Holy Trinity and St Michael's, later to become the second Coventry Cathedral. Christ Church is the shortest of the three, at 230 feet high, while Holy Trinity stands 237 feet and St Michael's tops the list at 295 feet.

Around the year 1300, the wealthy Hastings family built a chantry chapel onto the monastic church. The first mayor of Coventry, John Ward, was also buried in Greyfriars church in 1348. Several important Coventry families gave gifs to the friary and were buried in the church or the grounds. By the 16th century, there was a Rood Chapel in the churchyard, and another chapel dedicated to St Anne.

Greyfriars was suppressed by Henry VIII in 1538, and the monastic buildings were torn down. The tower and spire of the friary church were spared, however, and lived on as a feature of Coventry's skyline for the next 260 years, looked after by the city corporation. The spire was blown down in 1551, and the top remodelled in 1608 without a spire.

The spire was rebuilt and had to be repaired at least twice in the 17th and 18th century. The former monastic lands were initially converted to an orchard, which was swept away when New Union Street was created in 1820.

The base of the tower saw a number of uses, and by 1800 was in use as a pigsty and storehouse. 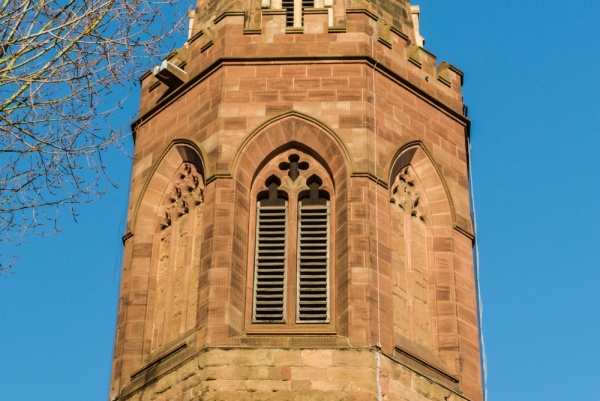 Belfry window openings in tower base

By the early 19th century the growing population of Coventry meant that more churches were thought necessary. An effort was launched to raise money by public subscription to rebuild the church. The Coventry civic administration, who by now owned the church spire, gave it to the new church. The area around the church, though, had been built up over the centuries, and it took several years to purchase the surrounding buildings and clear the space.

Clearing the area also allowed archaeologists to uncover the layout of the original friary, which proved to lie to the south of the church, with a burial ground to the north.

In the end the area of land available was much smaller than the medieval church, and when it opened in 1832 the new church was 124 feet long and 55 feet wide. The tower was no longer central, but functioned as the new chancel at the east end of the church. The new church occupied the area taken up by the medieval nave.

A new name was needed for the new church, for there were no more grey friars. The new building was consecrated as Christ Church, Coventry.

Unfortunately, the new church lasted only just over 100 years, for it was destroyed in the WWII bombing raids that devastated Coventry. It survived the worst raid on 14 November 1940 but was badly damaged in a subsequent raid on 8 April 1941. The structure was declared unsafe, and what remained of the Victorian walls were pulled down in 1950, leaving only the medieval tower base and spire. The tower now stands 211 feet high, with over half of that height taken up by the slender spire.

The base of the tower now operates as a cafe, rather cleverly called 'Inspire' (i.e. in-spire) so you can relax with a hot cup of tea in the surroundings of a historic church tower that has survived two major disasters and still forms part of Coventry's skyline.

More self catering near Christchurch Spire