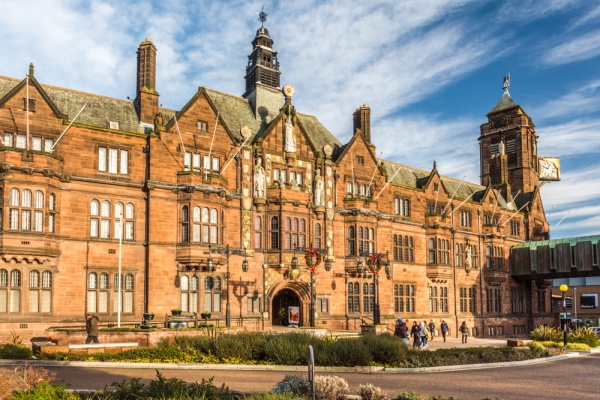 Though it is by no means the oldest building you will encounter whilst exploring historic Coventry, the striking Council House on Earl Street deserves attention as one of the city's most memorable buildings.

Since the medieval period, the civic administration of Coventry had been housed in St Mary's Guildhall, a picturesque 14th-century building opposite the cathedral ruins.

By the early years of the 20th century, the Guildhall was too small to house all the necessary government functions, and many administrative offices were moved to other locations around the city. A new, larger council house was needed.

In fact, the idea of a new council house was proposed much earlier in 1891 by Alderman James Marriott, but it took over 20 years to decide on the most suitable location and purchase properties already on the site that needed to be cleared.

Interestingly, the original Council House plans called for shops along the entire Earl Street frontage, with the council offices behind. This was later amended to a plan with shops on the ground floor and council offices above.

Edward Garrett and HW Simister of Birmingham won the competition, with plans emphasising the city's medieval past. Their brief was to design a place where the people of Coventry could meet those who represented them, with space town clerks, city engineers, waterworks, weights and measures, education, electric lighting, the city treasury, council rates, medical officers, gas, and police.

By the time their plans could begin being built the Earl Street site had been empty for so long that it was known locally as 'The Earl Street Stoneyard'.

The Council House was begun in 1913 to designs by Garrett and Simister. Construction had to be delayed when WWI broke out because so many men enlisted that there were not enough builders available.

Even one of the architects, Edward Garrett, had to apply for a temporary exemption from military service in order to see the building completed. Alderman WH Grant, head of the General Works Committee, appeared at Garrett's hearing as a witness on his behalf. There were more delays due to labour trouble when the project hired non-union workers.

The design was very sympathetic to the historic environs; the design is a sumptuous feast of Tudor Revival style, looking something like a grandiose 16th-century mansion, with the addition of a large clock tower at one end. The exterior is richly decorated with heraldic symbols; look for the elephant and castle, symbolic of the city of Coventry. The material is red sandstone ashlar, in keeping with nearby historic buildings.

The main frontage on Earl Street is mainly symmetrical, with a central belfry and a large central porch under giant figures, and a facade decorated with armorial symbols. On either side of the entrance are large figures of Earl Leofric of Mercia and his wife, Lady Godiva. At the top, surveying the scene, is the figure of Justice.

Original newspaper reports show that some locals objected to the richly decorated exterior of the building; the Coventry Herald called it 'slightly vulgar' and the Coventry Graphic thought it was 'gaudy'. Over time those objections have faded and today the Tudor-styled Council House is one of Coventry's best-known and iconic buildings.

Work was finished in 1917, though it did not officially open until 1920, in a ceremony presided over by HRH The Duke of York, Prince Albert, later to become King George VI.

The king's second visit to the Council House was under less auspicious circumstances; he came to Coventry in the wake of the terrible bombings of 14 November 1940. He was welcomed into the council room, which had lost all its window glass in the bombing raid. The room was lit only by candlelight and there was no power to cook, so the king ate a cold meal.

Astonishingly, though the Council House lost its windows in the bombing, the building itself escaped major damage, a quite remarkable escape considering how close it stands to the medieval cathedral, which was ruined by the bombs.

The colourful stained glass windows designed by Garrett and Simister were destroyed, to be replaced by plain glass which certainly allows more light.

The Council House is open to the public for the annual Heritage Open Days event in September. Highlights include the Council Chambers, Lord Mayor’s hospitality suite and Lady Mayoress Parlour. Of course, the exterior can be viewed at any time.

More self catering near Council House