HERITAGE HIGHLIGHTS:   The parish church of St Swithun dates to the 11th century 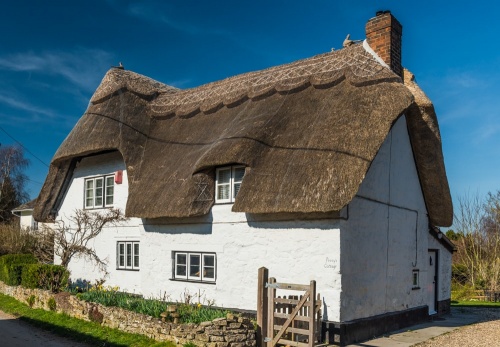 A thatched cottage in Hinton Parva

Hinton Parva (sometimes known as Little Hinton) is a delightful little village in a lovely countryside setting east of Swindon. The ancient trackway known as the Icknield Way ran across the top of the downs just south of the village (today the route of the Icknield Way is followed by the Ridgeway National Trail).

Just west of the village runs the course of the major Roman road known as Ermin Street. It seems likely that there were two settlements here during the Roman period, but it was really in the Saxon era that Hinton Parva began to take the shape we see today, as the village developed on a linear pattern running roughly east-west at the foot of the downs.

The village developed in two sections; East Hinton, centred on the church of St Swithun's, and West Hinton, a collection of farms. 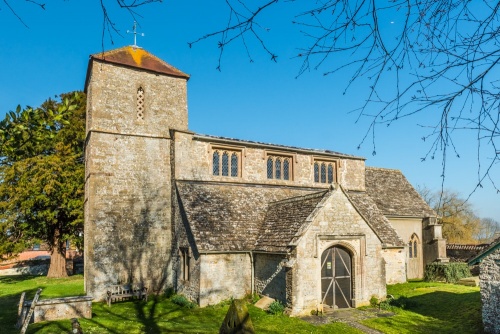 In the Saxon period, Hinton and the neighbouring village of Wanborough were owned by the monks of Winchester. It was not until the 12th century that Hinton Parva became a distinct parish in its own right. The name Little Hinton was used from the 15th century to distinguish it from Broad Hinton to the south. The ending 'Parva' only came into use in the 17th century.

The Hinton Parva estate passed to the Crown after the Dissolution of the Monasteries, but Henry VIII granted it to the cathedral chapter of Winchester in 1541.

The parish church is dedicated to St Swithun. Most of the present building dates to the 13th century but it incorporates parts of a late Saxon church. You can see the outline of the Saxon tower roof set into the east wall of the present tower.

Inside the church, another Saxon feature is the tub font, carved with bands of traditional Saxon decoration including blind arcading and interlace patterns. Look for the figure of a strange beast amid the interlace. Also look for a royal coat of arms dated 1784, erected to mark King George III's recovery from the first bout of the madness that plagued his reign.

The area around the church is protected as a conservation area due to its historical character and the high proportion of listed buildings. There are several thatched cottages, with perhaps the most picturesque being Povey's Cottage on Tucker's Lane.

Povey's Cottage is a whitewashed one and a half storey building, probably erected in the 18th century, under a thatched roof with a pair of eyebrow dormers facing the road. We were driving past the cottage and were so struck by its beauty that we just had to stop and photograph it! 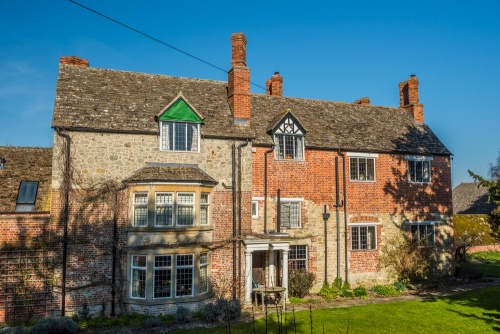 Another thatched building is Greystones on Church Row (combined under one roof with Threeways and Little Cottage). This is also dedicated 18th-century building, with one and a half storeys and a pair of brick chimneys.

One of the most picturesque cottages in Hinton Parva is Icknield Cottage on City Corner. This pretty thatched cottage is of 18th-century date with a whitewashed exterior and a pair of chimneys.

Just behind the churchyard is Hinton Manor, or The Manor House, which dates in part to the 17th century. The manor house now offers bed and breakfast to walkers on the Ridgeway National Trail. Behind the main house is a thatched barn. 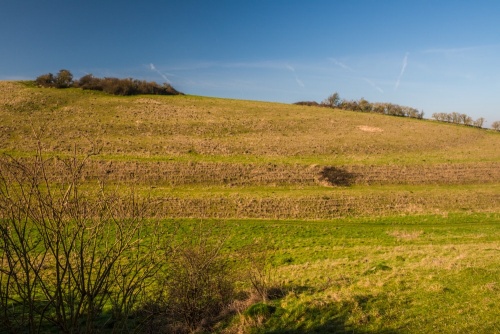 Strip lynchets in The Coombes

Strip lynchets are a series of stepped terraces created by ploughing the slope of a hill. They are essentially the same as ridge and furrow marks on the level ground. Strip lynchets follow the contour of the hillside.

They were probably created by medieval peasants trying to cultivate marginal land, perhaps under the pressure of a rise in population leading up to the Black Death in 1348. It is fascinating to trace these ancient field patterns on the slopes of The Coombes.

Hinton Parva is a wonderfully pretty village. It is a remarkably relaxed place, and it seems startling to realise that it is just a few miles from the urban sprawl of Swindon. It is well worth having a walk around the village and exploring The Coombes, and it makes a very good place to stop if you are tackling the Ridgeway.

Note
Do not confuse this village of Hinton Parva near Swindon with the village of the same name near Wimborne Minster in Dorset!

More self catering near Hinton Parva