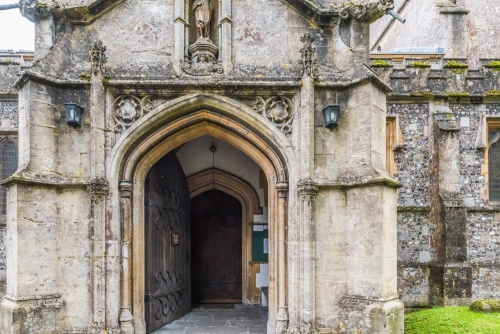 The Wiltshire village of Pewsey is strongly linked to King Alfred the Great, whose statue stands in the centre of the village, and who held Pewsey as a royal estate. Local legend says that the king, fresh from a decisive victory over the invading Danes, stood in the doorway of Pewsey church and proclaimed that day, 14 September, as a feast day forever.

That legend certainly suggests that there was a church here before AD 899, when Alfred died. The feast day, known as Holy Cross Day, was the origin of the annual Pewsey Feast, one of Wiltshire's oldest carnivals, now observed over two weeks in mid-September.

In AD 940 Alfred's descendants gave the church in Pewsey to the Abbey of Winchester. 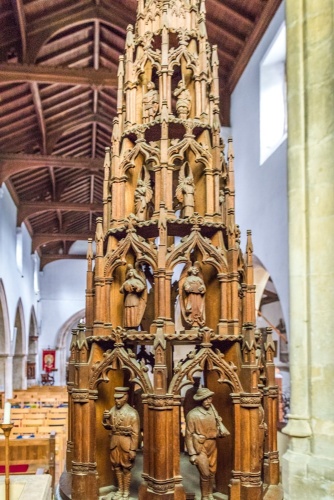 The Saxon church was rebuilt shortly after the Norman invasion of 1066. The foundations of the present building, made of sarsen stone, may come from that Saxon building.

Apart from those early foundations, the oldest part of the present building is the 12th-century nave. The aisles are a century later, and the chancel was rebuilt in the late 13th century after it had collapsed. The nave was raised and a clerestory inserted in the 14th century, while the tower was added in the Tudor period.

Interior highlights include a 12th-century Norman font with a beautifully decorated Victorian cover, carved by Canon Bernard Pleydell Bouverie, Rector of Pewsey from 1880-1910. The cover commemorates those who fell during the Indian campaigns. Set into the wall beside the chancel arch is a squint, allowing worshippers in the south aisle to view the altar during church services. 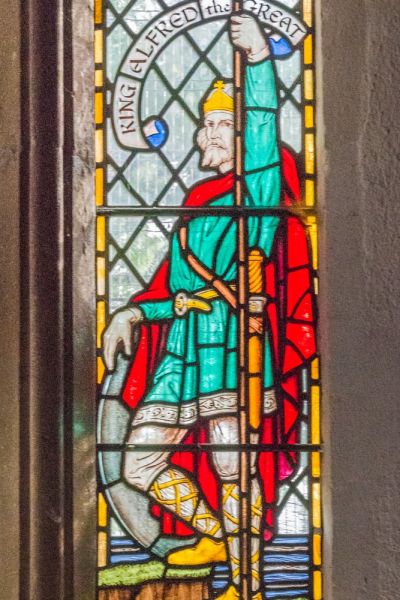 The Alfred Window in the Lady Chapel

Most of the furnishings date to Canon Bouverie's extensive restoration in the late Victorian period, including the choir stalls, altar table, and carved reredos.

In the south chapel is perhaps the most interesting memorial, a wall monument to Katherine Harding (d 1645). Harding was the wife of Charles II's Groom of the Bedchamber and died while the king was in exile in Holland. There are several marble wall tablets in the south aisle including one to Robert Hopper (d 1782) and William Hopper (d 1791).

The church has an outstanding collection of Victorian stained glass windows including several by the famous CE Kempe studio. Both windows in the south aisle are by Kempe and depict The Lamb of God (1891) and The Visitation (1894). There is another Kempe window in the north aisle, depicting The Presentation in the Temple. 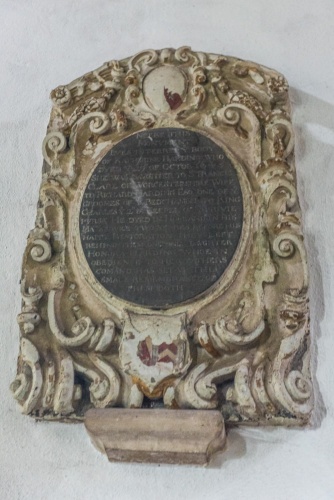 The most interesting window is the Alfred Window in the Lady Chapel. The window reflects King Alfred the Great's close ties to Pewsey. The right-hand light shows Alfred in typical Saxon garb, in a similar pose to the statue in the village centre. The left-hand light depicts the Alfred Jewel, an ornately decorated pointer found at North Petherton in Somerset and now on display at the Ashmolean Museum in Oxford.

In the corner of the nave is a clock mechanism dating to the early 17th century. It was removed from the tower in 1957. 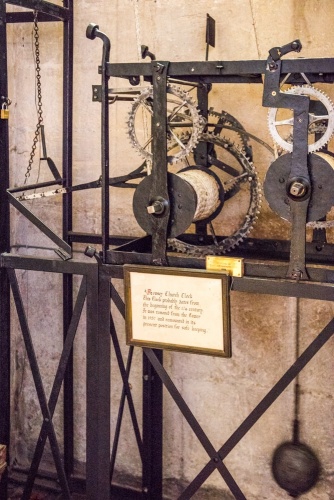 St John the Baptist Church is located on Church Street (the A345) at the southern edge of Pewsey. There is no dedicated parking but we were easily able to find a place to park along the road. The church was open when we visited. 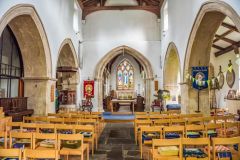 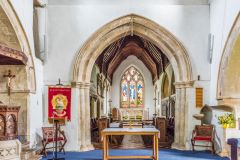