The coast begins at Totland on the Solent, and stretches along the southwest shore of the Isle of Wight nearly to Ventnor. Along the way, it passes the dramatic chalk stack of The Needles promontory and skirts shingle beaches and high cliffs - and a petrified forest of fossilized conifers! A walking path runs the length of the coast, providing wonderful views over the Solent in the north and the English Channel in the south.

The chalk stacks of The Needles are perhaps the most notable feature on the coast. On Headon Hill, just to the north of The Needles, lies a Bronze Age burial mound dating to perhaps 1500 BCE.

At Alum Bay the cliffs are stained in multi-coloured hues by mineral deposits. The colours run in vertical bands up the cliffs, which have been a popular seaside gathering place since Victorian times.

The inaccessible undercliffs along the coast provide a breeding ground for the Glanville Fritillary butterfly, a species found only on the Isle of Wight and the Channel Islands. 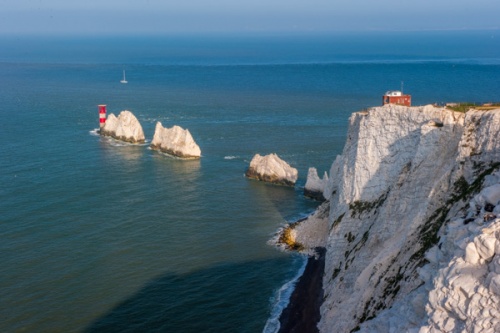 Isle of Wight AONB
Almost exactly half of the area of the Isle of Wight has been designated an Area of Outstanding Natural Beauty (AONB), a recognition of its scenic and ecological value. The AONB takes in the Hamstead and Tennyson Heritage Coasts, and the lovely chalk downlands than extend into the interior of the island.

Hamstead Heritage Coast
This coast stretches along the northwestern (Solent) shore of the Isle of Wight from Yarmouth harbour to Thorness Bay, near Cowes. The coast is a region of salt marshes and mudflats backed by low cliffs of clay. At Bouldnor, near Hamstead, these cliffs are especially rich in fossils - it has been claimed that this exposed deposit of Oligocene fossils embedded in the clay is the richest on earth.