The heritage coast extends from Seaton in the west almost to the Bill of Portland in the east. This is excellent walking country. The South West Coast Path runs along the clifftops, but there are also numerous waymarked trails looping inland from the coast.

One of the most striking features along the coast is Chesil Beach, a long, narrow spit of land reaching 18 miles from Portland Bill to Abbotsbury. Chesil is a steep slope of shingle fronted by pebbles which have been polished smooth by the action of the waves. Visitors can search for "Hag" pebbles, which have a hole bored through them by the natural action of the water.

The Chesil Beach Centre near Portland tells the story of the regions unique geology through a series of interactive displays. Visitors can also take a trip on the glass-bottomed Fleet Observer boat to examine the marine world of Chesil more closely.

At the eastern end of Chesil Beach is Abbotsbury, famous for its seaside swannery, where you can wander freely among the mute swans that have made this area their home for over 600 years. Nearby is Abbotsbury Gardens, where you can explore 20 acres of rare and exotic plants in a walled garden setting.

The Lyme Regis Marine Wildlife Area extends for 4 1/2 miles from Humble Point to Charmouth, and is home to a huge variety of marine wildlife, including seaweeds, algae, limpets, winkles, crustaceans, and the carnivorous dogwhelk. The Heritage Coast Centre in Charmouth is an excellent place to learn about the unique geology and geography of this area.

Lyme Regis itself is a lovely old port, most famous recently as the scene of John Fowle's novel, The French Lieutenant's Woman. The area near Lyme Regis is known as the Jurassic Coast, a tribute to the vast number of fossils (mostly marine fossils) that have been found trapped in the cliffs. The cliffs are given to landslips, so care should be taken, especially in wet weather, when the undercliffs may become unstable.

Flower meadows near the coast provide habitat for butterflies and are at their colourful best in May and early June. 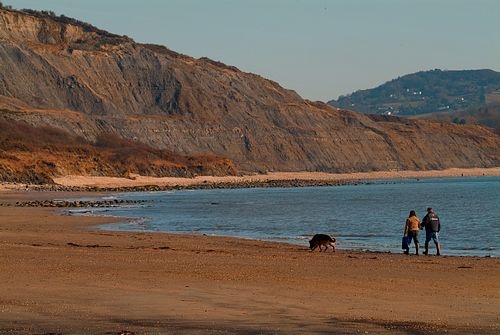 Dorset AONB
This Area of Outstanding Natural Beauty takes in the heritage coasts of Purbeck and West Dorset, and stretches inland to cover the broad chalk valleys and ridges of central Dorset. On the coast are the pebble bank of Chesil Beach and the great arch of Durdle Door at Lulworth Cove.

The South West Coast Path
Easily the longest and, in places, the most arduous, of England's National Trails. The path begins at Poole and follows the south coast to Land's End, then north and east to Minehead in Somerset. The route is quite popular, and it can be crowded in the summer months, though there are always long stretches where your only company will be a chorus of sea birds. More ...

Purbeck Heritage Coast
The heritage coast runs from Arne, in Poole Harbour, along the southern shore of the Isle of Purbeck to Weymouth Bay. The Purbeck area is famous for Purbeck Marble (which isn't marble, but crystalline limestone). This "marble" has graced many of the most illustrious buildings in English history, notably Salisbury Cathedral. More ...