HERITAGE HIGHLIGHTS:   Site of the 12th century Cathedral of the Isles 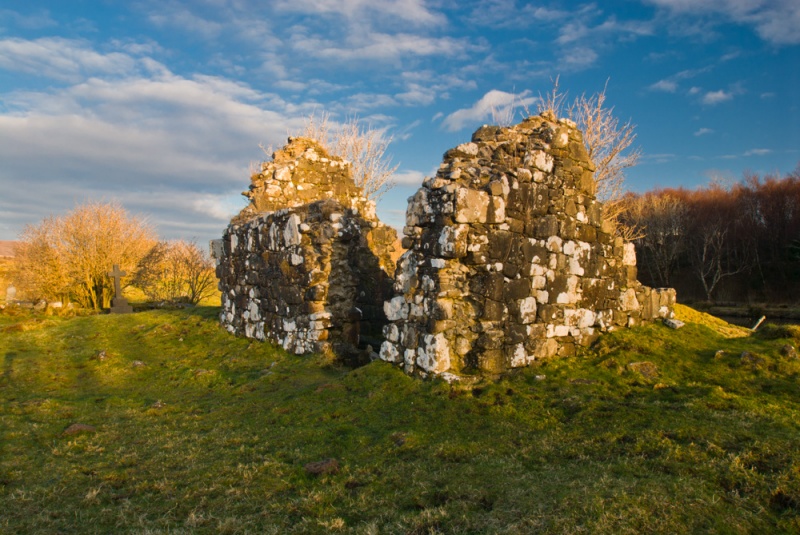 On a small island in the middle of the River Snizort on the west coast of the Isle of Skye stands one of the most fascinating historic sites in Scotland. The island is known as Eilean Chaluim Chille or Saint Columba's Isle, and was the seat of the powerful Bishops of the Isles.

The Bishopric of the Isles

There seems to be some doubt as to exactly when the Bishopric of the Isles was established. It is possible that there was a cathedral church at Skeabost as early as 1079. We do know that sometime around AD 1134 a new Scottish see was created by combining several earlier Norse sees, taking in the Hebrides and the Isle of Man.

King Amlaib of Mann and the Isles granted the monks of Furness Abbey the right to elect the new bishop. They chose Wimund, one of their own number. Until 1138 his see may have taken in just the Isle of Skye, but later expanded to encompass all the Western Isles and Man.

Wimund does not seem to have been suited to the ecclesiastical life, for in 1147 he became a seafaring adventurer. He attacked Gille Aldan, Bishop of Whithorn, but was captured by his rival, blinded and castrated. He spent the rest of his life at Byland Abbey in Yorkshire. 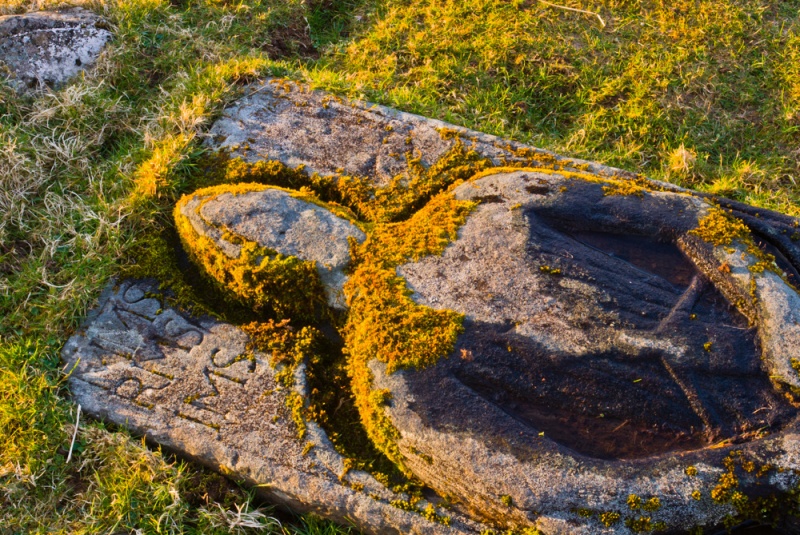 The seat of the Bishops of the Isles was an island in the river at Skeabost, at the head of Loch Snizort Beag. The location was chosen because, according to legend, St Columba had preached from atop a rock here. The island site may have been a Pictish settlement, though it is possible that the inhabitants had already converted to a form of Christianity by the time of Columba's arrival.

The term 'cathedral' perhaps gives the impression of an imposing building, but the size of the island prohibits this. The church here served two purposes; it was at the same time the bishop's seat, and Snizort parish church.

It is clear, however, that Skeabost cathedral was an immensely important site. It remained the main seat of the Bishops of the Isles and the new Scottish Diocese of the the Isles from 1419. In 1498 it was proposed that the bishops move to Iona, but there is no actual evidence that the move took place. 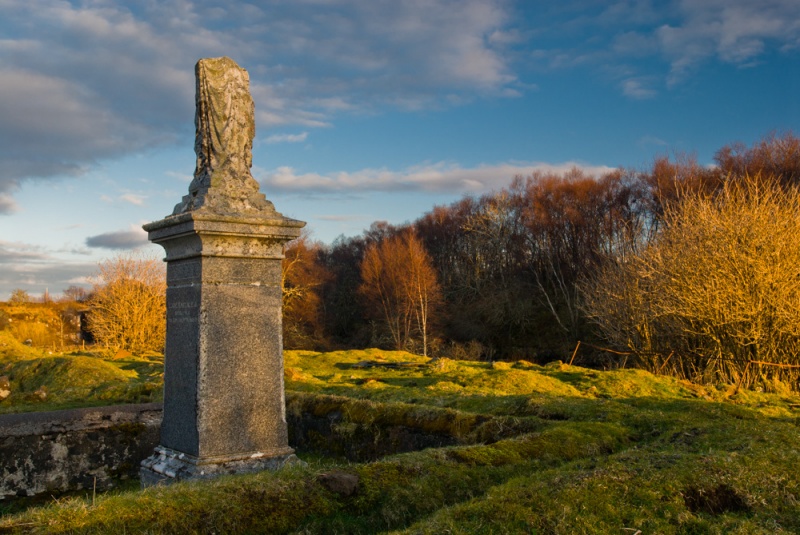 19th-century monument in the burial ground

The remains of the cathedral stood until at least 1501, and it seems likely that the Bishops of the Isles were based at Skeabost until the church was finally destroyed during the Scottish Reformation. The cathedral site is overlaid with later burials enclosures, but an aerial survey has revealed that it had a transept, and structures outside the cathedral church suggest a monastic settlement.

Clan Nicholson used the island as their burial ground for 900 years, and the remains of clan gravestones date back to at least the 16th century. There are several crusader graves, including a quite stunning carving of an armed knight in relief, his hand on his sword hilt. This grave slab lies south-west of the church. It is carved from striking blue schist and reaches 6 feet 7 inches long.

The carving is exquisitely detailed, and shows the knight wearing a bascinet, a surcoat of banded mail and a quilted coat reaching to his knees. In one corner are the letters RMS, perhaps suggesting that the knight was a member of the MacSween family. Another, more worn figure lies nearby, and a third relief carving of a knight lies inside the ruins of St Columba's Chapel.

Though the ruins of the cathedral may be difficult to decipher there are two ruined chapels on the island. At the west end of the island is a Nicholson burial aisle, while at the other end is a MacQueen enclosure.

The Nicholson (or Nicolson) Aisle is also known as the Chapel of St Columba, or Columba's Teampull. It may date to the 11th century, though a fragment of carved capital is in the same style as a 13th century carving on Iona. Tradition suggests that 28 chiefs of Clan Nicholson are buried in the chapel.

The chapel is aligned on an east/west axis, and is in relatively good condition, with gables still reaching 11 feet high. The chapel is just under 16 feet long and just over 9 feet wide, with two windows.

A survey in 1897 reports that there were 5 or 6 chapels within an enclosing wall, suggesting an early Celtic monastic settlement. If there were indeed that many chapels they are nowhere to be seen today. 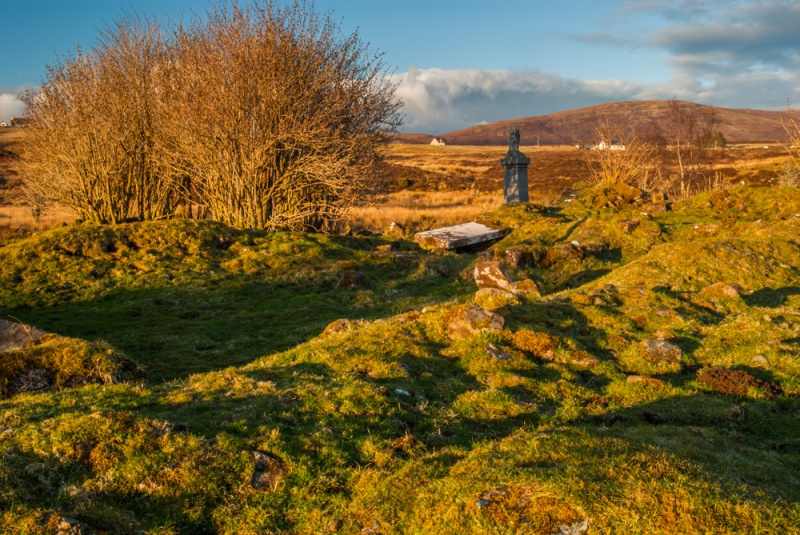 The ruins of Skeabost Cathedral

The chapel is not signposted, but is actually quite easy to find if you know where to look. The easiest way to reach the island is to start from the entrance drive to the Skeabost Hotel, on the A850 about 4 miles west of Portree. Bear right as you follow the drive through the hotel grounds.

The drive runs parallel to the River Snizort, east in the direction of Skeabost Bridge. Cross the river and follow the far bank north. You will see the island ahead of you in the middle of the river. After 100 yards you will come to a footbridge leading to an islet, then on to the main island.

You can also reach the footbridge via a track from Tote township to the north. An even shorter route is to take the track that leaves from the junction of the A87 with the B8036 just east of Skeabost Bridge. The track bears directly west, following the A87 and you will see the island come into view on your right.

Do take care; the island is very overgrown, and it is easy to trip over half-concealed gravestones amidst the undergrowth. 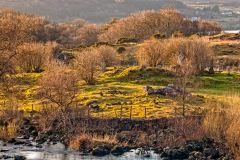 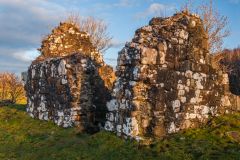 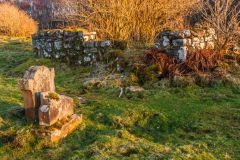 Nearby accommodation is calculated 'as the crow flies' from Skeabost Chapel. 'Nearest' may involve a long drive up and down glens or, if you are near the coast, may include a ferry ride! Please check the property map to make sure the location is right for you.

More self catering near Skeabost Chapel