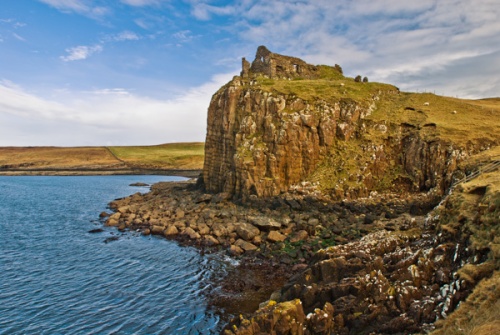 You won't find Duntulm Castle in many tourist brochures for the Isle of Skye, but it is hard to imagine a more scenic and dramatic view than the ruins of Duntulm, standing on its sheer cliff of basalt, looking across The Minch to the Isle of Lewis in the distance.

There is thought to have been a dun, or broch on this rocky headland, known as Dun Dhaibhidh, or David's Fort. Either the dun never existed, or all traces of it structure were obliterated when the current castle was begun in the 14th or 15th century, probably by the MacLeod clan.

The steep cliffs provided defence on three sides, while on the landward side a deep ditch was cut down through the rock to a depth of up to 15 feet. The main entrance was across this ditch, presumably by way of a drawbridge, now vanished. There is also a small postern gate on the seaward side.

Much of the castle remains are 15th century, and form a rectangle, about 82 feet by 30 feet. Inside the outer walls, the ground is very irregular, though there are vaulted chambers cut down into the rock. The main tower once stood to four storeys but this has been now reduced to little more than the tower vaults.

A small 17th-century tower was added in one corner of the main block, but this collapsed in the late 20th century. In the northwest corner of the enclosure is a rectangular house, with walls over 2 feet thick. The entire structure is built of local basalt and is very worn. It is definitely not a site where you want to scramble on the walls - its dangerous!

Throughout the 13th and 14th centuries the Earls of Ross and the Lords of the Isles fought for control of the Trotternish area, and the struggle for power continued in the late mediaeval period between the MacLeods and the MacDonalds of Sleat. The earliest written record of Duntulm comes when King James V visited in 1540 and was said to have been impressed by the castle's strength and the hospitality he was shown here.

But not every guest was shown hospitality. Hugh MacDonald, a cousin of Donald Gorm, the 9th chief, planned to kill his cousin and take his place. The plot was discovered, and Hugh went into hiding at Dun an Sticir, North Uist.

He was eventually captured in 1601 and thrown into the dungeon at Duntulm, where he was left to die with nothing but a plate of salty beef and an empty water pitcher to torment him. Not surprisingly, the starving prisoner went mad before he died. His ghost is said to haunt the castle ruins, screaming madly. 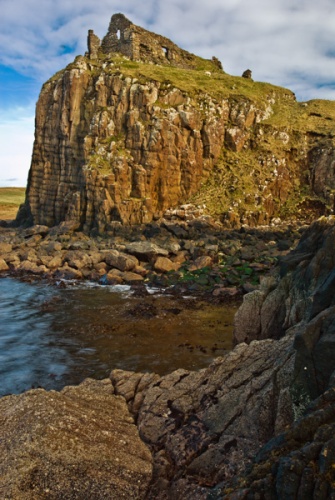 Duntulm Castle from the foreshore

Hugh MacDonald's troubled spirit has ghostly company, for the spectre of Donald Gorm also haunts Duntulm, where he is said to fight with other ghosts - a reflection perhaps, on his character while alive? Another ghost is that of a lady whose husband rejected her after she lost an eye in an accident.

Hugh MacDonald's fate was no more dire than that of a nursemaid who, local stories say, was set the task of watching over the infant son of the laird. The child fell from the window and died on the rocks below, whereupon the nursemaid was taken far into the Atlantic and set adrift in a small boat as punishment. The castle was then deserted by the heartbroken laird and his family.

Now, we're on pretty shaky ground with this story, but this is an area where such tales abound, and certainly some of the true events are no more dreadful than the stories and legends of the islands. The nursemaid's ghost is said to haunt the castle, screaming hysterically.

By a charter of 1618 the Privy Council permanently awarded the lands to the MacDonalds, and Duntulm entered a more settled period of its history. According to the terms of the charter, the MacDonalds 9th Chief, Donald Gorm Og (Sir Donald MacDonald) was required to reside at Duntulm, (moving here from his traditional seat at Dunscaith, on the Sleat peninsula) and to repair and maintain it with all speed if it was found to be derelict.

So Donald Gorm repaired the castle and added a second tower. The MacDonalds stayed at Duntulm until 1732, when Sir Alexander MacDonald built a new house at Monkstadt, five miles away, and stones from Duntulm were scavenged to provide material for the new house. One reason for the move to Monkstadt was supposedly because of ghosts at the castle. Whatever the real reason, the ruined castle was left to moulder away.

There's not a lot to see at Duntulm, and no facilities, but my word the location is utterly superb. Its a ruin, but what a ruin, especially if you [carefully] scramble down to the shore and view it from below! It's a good idea to wear good waterproof boots, and for goodness sake be careful near the cliff edge.

Nearby accommodation is calculated 'as the crow flies' from Duntulm Castle. 'Nearest' may involve a long drive up and down glens or, if you are near the coast, may include a ferry ride! Please check the property map to make sure the location is right for you.

More self catering near Duntulm Castle