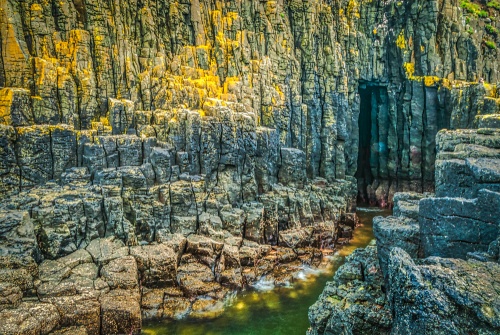 The Cave of Gold (Uamh Oir) has been dubbed Skye's answer to the Giant's Causeway, across the Irish Sea, though it actually looks more like Fingal's Cave on Staffa. This remote and rarely visited sea cave north of Uig is formed of hexagonal columns of basalt, creating a remarkable geological pattern.

Where is the Gold?

To the best of my knowledge, the name 'cave of gold' has nothing to do with gold; there are no legends of buried treasure here. The name likely comes from the golden colour of the yellow lichen that covers the basalt rock formations. 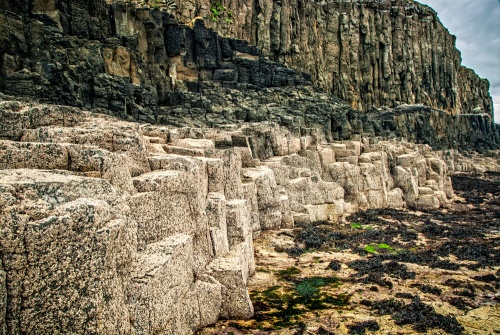 Rock formations along the shore

There are several legends linked to the Cave of Gold (though it is by no means certain that the legends refer to this particular cave). according to one tale preserved by Clan MacRae, the clan piper led his faithful dog into the cave and never returned. The sound of his mournful piping can sometimes be heard, coming up out of the earth.

Another piper, Donald MacCrimmon, piper to Clan MacLeod, is said to have disappeared after he entered the Cave of Gold in 1745, but, yet again, it isn't clear which cave the story refers to. MacCrimmon's story is remembered in the song, 'MacCriimmon's Lament'.

Author Neil Gaimon revealed in his blog that he was inspired to write his novella, 'The Truth is a Cave in the Black Mountains' after reading about the Cave of Gold in a book on Skye folklore. 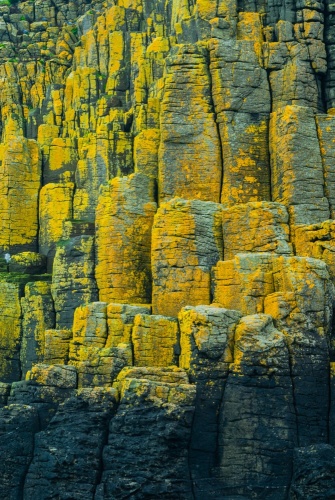 Basalt columns at the Cave of Gold

From the A855 coastal road at Kilmuir, take the single-track road to Camus More. After 750m you will come to the ruins of an old church on your left. Immediately past the church, take the right turn to Bornesketaig. After 500m the road ends in a wide turnaround area, with space for several cars to park. Make sure to leave plenty of room for other vehicles!

From the parking area, continue straight on, through an area churned into mud by cattle, towards the shore. Follow the line of an old fence to your left, parallel with the shore. Pass through a kissing gate and carry on along the clifftop.

Past a rusted iron post set into a rock you will see the start of a steep path leading down to the rocky shore below. Please take care! This stretch of the path can be treacherous in wet weather.

You will see a trail leading back to your right, following a level platform, or rocky ledge. The cave entrance will come into view on your right, but long before then you will see the basalt columns that make this such a special place. 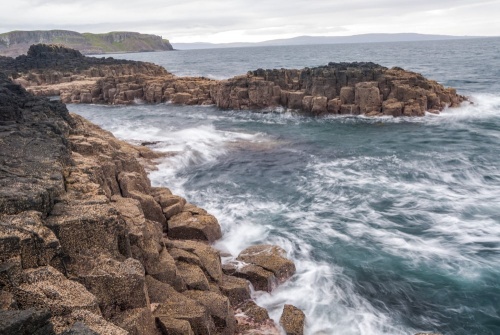 Looking south along the Trotternish coast 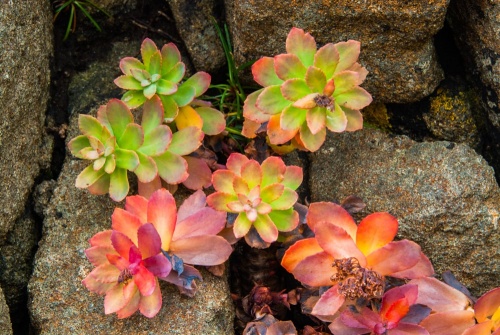 Colourful plants amid the rocks

Please note that the cave cannot be entered on foot; the entrance is under water. That said, the location is amazing, and the rock formations that form the cave and the surrounding coast are well worth the walk to see.

Do be careful exploring the area around the cave mouth; the basalt is beautiful but can be jagged. Just use common sense, and you'll enjoy your visit as much as our family did. 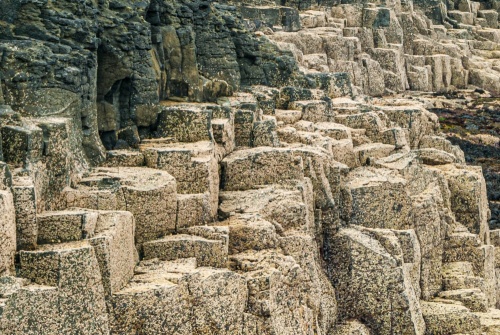 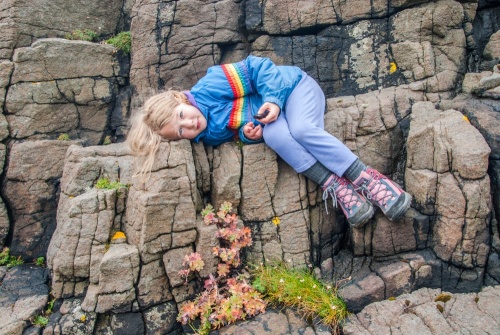 Resting by the cave mouth

It takes roughly 20 minutes to walk from the parking area to the cave, so count on one hour for a round-trip, with plenty of time to relax by the cave and enjoy the coastal scenery. Our 6-year-old daughter made the walk, so you can too!

About Cave of Gold, Skye
Address: Bornesketaig, Kilmuir, Uig, Isle of Skye, Highlands and Islands, Scotland
Attraction Type: Countryside - Cave
Location: Park at the end of the road at Bornesketaig, Kilmuir, and follow the coast west to the cave. Take care on the final section of the trail, which is steep and can be slippery.
Location map
OS: NG370719
Photo Credit: David Ross and Britain Express

Nearby accommodation is calculated 'as the crow flies' from Cave of Gold (Uamh Oir). 'Nearest' may involve a long drive up and down glens or, if you are near the coast, may include a ferry ride! Please check the property map to make sure the location is right for you.

More self catering near Cave of Gold, Skye

More bed and breakfasts near Cave of Gold, Skye