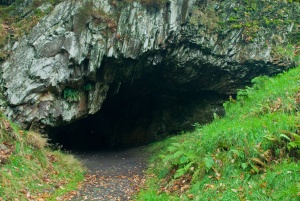 Dolaucothi Gold Mines
Off the A482 Lampeter to Llandovery, Pumpsaint, Llanwrda SA19 8RR.
Dolaucothi may have been the only gold mine in Britain during the Roman occupation, and there is evidence that the area was mined long before the Romans arrived. The Romans removed over Â½ million ton of rock leaving behind chasms and pits where they mined the gold veins. The Romans left in the 4th century, leaving barracks, bathhouses and other town remnants. Visitors today can see the underground tunnels and mining gear, plus the aqueducts that brought water to the mine.

Llandovery Fort (Alabum)
Llanfair-ar-y-bryn. On the A40 at Llandovery, Dyfed.
A medieval church stands in one corner of the Roman fort here, and the Roman road heading north towards Pumsaint is clearly visible.

Maridunum Demetarum (Carmarthen)
Carmarthen
Carmarthen was a Roman "civitas" or tribal town of the Demetae tribe. The Romans established a presence here in 75 AD with a military fort, but the civitas soon grew to include an amphitheatre (one of only 7 surviving in Britain), the remains of which are still visible.

Pumsaint Fort (Luentinum)
Located off the A482, just outside the village of Pumsaint, Llanwrda Carmarthenshire.
A wooden Flavian fort built about AD 120, later rebuilt in stone, and finally abandoned around AD 150. The fort here guarded the thriving gold mines at Dolaucothi.