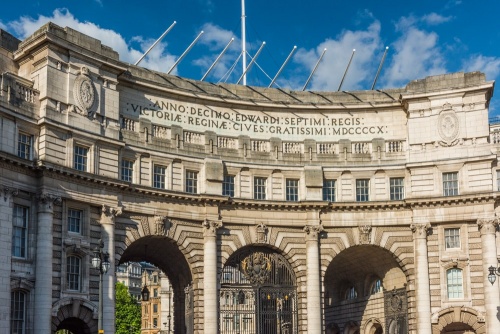 Leading from the southwest corner of Trafalgar Square into The Mall, the quintuple arched ceremonial gateway of Admiralty Arch is one of London's most famous landmarks. The Arch was built to house naval offices and residences.

Admiralty Arch was designed in 1910 by Sir Aston Webb (who also worked on Buckingham Palace and the Victoria and Albert Museum) to provide an elegant ceremonial passage from the hectic Trafalgar Square towards Buckingham Palace.

Note that traffic does not pass through the massive central arch - that is only opened for state occasions. The small outer arches are for pedestrian traffic and the remaining central arches for vehicles.

The Arch was originally commissioned by King Edward VII in memory of his mother, Queen Victoria, though Edward did not live to see the work completed. A Latin inscription on the underside of the Arch denotes this memorial connection. 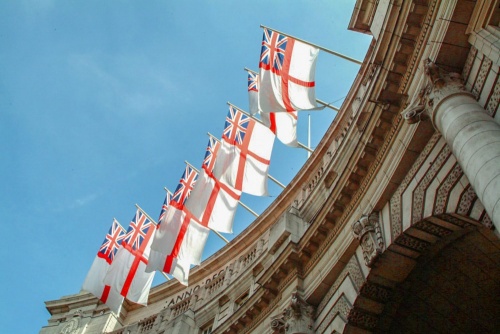 White Ensigns flying over the arch

As part of the same development scheme that saw the Admiralty Arch built, Sir Aston Webb also widened The Mall (the old Mall, which dates from the time of Charles II, still exists beside the current thoroughfare). He also designed the gilt statue of Victoria in front of Buckingham Palace that provides such a striking counterpoint to the Admiralty Arch at the other end of The Mall. At the same time, Webb refaced Buckingham Palace and laid out the Memorial Gardens.

This ambitious building scheme was financed by donations from across the British Empire.

Above the arch is a Latin inscription reading:

The inscription translates as:

'In the tenth year of King Edward VII, to Queen Victoria, from most grateful citizens, 1910'

While Sir Aston Webb designed the Arch, construction was carried out by the John Mowlam Company. The arch is flanked by sculptures of Navigation and Gunnery, designed by Thomas Brock. 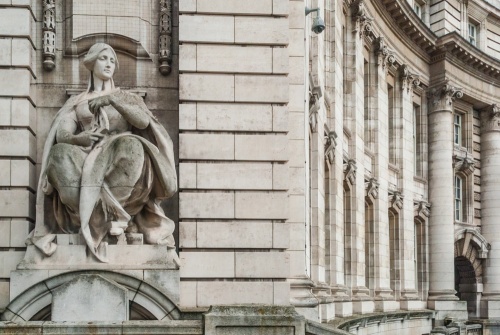 The sculpture of Navigation

A flat in the north wing of Admiralty Arch was intended to be a residence for the First Lord of the Admiralty, but in the end, the flat was used as the official residence of the First Sea Lord. It was here that Admiral Prince Louis of Battenberg gave the order to mobilise the fleet when the First World War broke out in 1914. The flat was later the residence of his son Lord Mountbatten of Burma. Another First Lord to work here was Sir Winston Churchill (twice).

Another famous name linked to Admiralty Arch is Ian Fleming. Though known today as the author of the James Bond series of spy novels Fleming was a real-life intelligence officer, acting as a Personal Assistant to the Director of the Naval Intelligence Division, Admiral John Godfrey and as liaison to Bletchley Park, the secret code-breaking facility in Buckinghamshire.

The Royal Navy left Admiralty Arch in the 1990s for new headquarters on Whitehall. The Arch remained empty until 2000 when the Cabinet Office occupied the building. 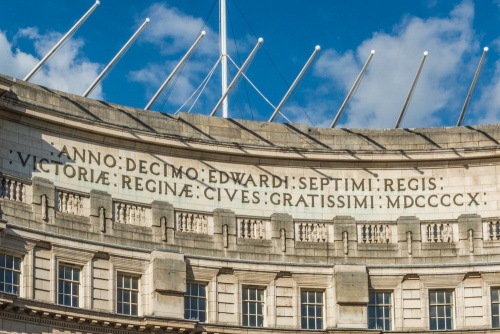 The Latin inscription over the Arch

In 2013 planning permission was granted to convert the Arch into a luxury hotel, private residences and a private members club. Even after the Arch's conversion to a hotel, it will be required to fly the naval White Ensign on special state occasions.

Admiralty Arch is often used for ceremonial processions. For example, when the monarch travels between St Paul's Cathedral and Buckingham Palace the royal coach will pass under the arch.

If you walk through the northernmost arch you will see an odd protrusion in the shape of a human nose. The nose was installed in 1996 by the artist Rick Buckley as part of a social protest against what he termed the 'Big Brother society'. The nose is about seven feet off the ground, making it about waist height for anyone mounted on horseback.

Admiralty Arch is on the west side of Trafalgar Square. The closest underground station is Charing Cross. From the station exit turn left and walk down The Strand to Trafalgar Square. You will see the arch on the far side of the square. You'll have to cross Northumberland Avenue and Whitehall to reach the arch. If you cross under the pedestrian archway you can get a much better view of the arch from the west.

More self catering near Admiralty Arch