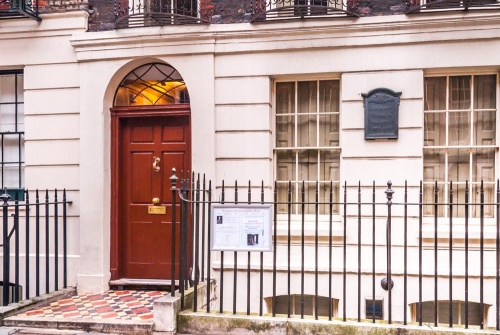 Benjamin Franklin was one of the most remarkable men of his age; a scientist, publisher, writer, inventor, and one of the moving forces behind the establishment of the United States. From 1757 to 1775 Benjamin Franklin lived in this lovely Grade I listed Georgian townhouse close to Trafalgar Square. Today, Benjamin Franklin House is a museum and education centre based in the last surviving Franklin house in the world.

During the 16 years that Franklin lived at 36 Craven Street, he carried out numerous experiments in the fields of electricity, optics, music, health, and heating. He published a 'newspaper' called the Craven Street Gazette and lived at the hub of high society London.

The interesting thing about Benjamin Franklin House is that the curators have made an attempt to bring history to life; to make the museum more than a collection of artefacts and really give visitors a sense of what life was like here over 200 years ago. 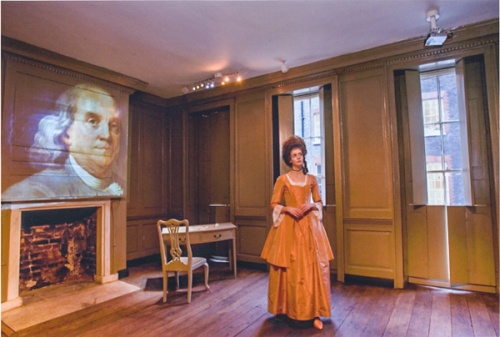 To do this the museum makes use of modern audio and visual techniques like projecting images into space, and this is blended with a soundtrack of Franklin telling the story of his life in London in his own words. Your 'guide' for a visit to the house is Polly Hewson, daughter of Franklin's landlady.

Polly's husband William ran a school of anatomy in the basement of the house. Years later a large number of skeletons were discovered in the garden, suggesting that William paid bodysnatchers for fresh cadavers, allowing his students to learn anatomy by dissection, which was illegal at the time.

There are two further sections of Franklin House; the Student Science Centre offers younger visitors a chance to explore the science behind Franklin's work (open to pre-booked groups only), and the top floor Scholarship Centre allows more academic study of Franklin's life, including his letters and other papers.

Benjamin Franklin House Museum opened its doors to visitors on the 300th anniversary of Franklin's birth, in January 2006. 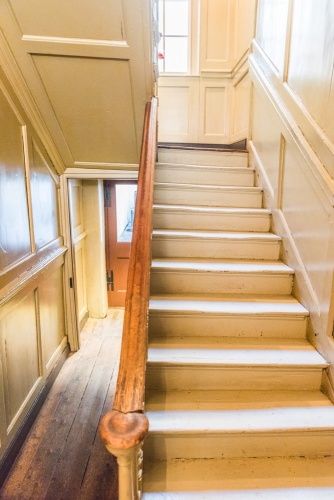 The museum is extremely easy to reach; it is halfway down Craven street, just around the corner from Charing Cross tube and rail station and a very short stroll from Trafalgar Square to the north and Embankment Gardens to the south.

Visiting is by guided tour only, but before the tour begins you have the chance to explore a small exhibit of artefacts including skeletons buried by William Hewson and his anatomy students. Then you watch a short film about Benjamin Franklin and his life in London before a costumed actress in the guise of Poly Hewson takes you on a tour of the house.

The tour takes in several rooms on the ground floor, the beautifully carved Georgian staircase, and Franklin's suite of rooms on the first floor. The guide was excellent, and never departed from her character of Poly Hewson until the tour was finished. The tour experience is completely unlike anything I've experienced at any other historic house in Britain.

When the tour was over the guide left her character of Polly Hewson behind and answered questions about Franklin and told us how the house had been restored. She also recounted an amusing anecdote about Franklin's chamber on the first floor. 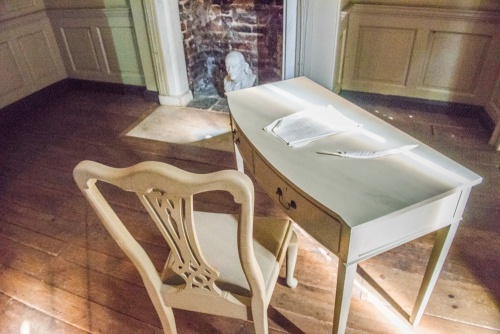 It seems that Franklin was a firm believer in the health benefits of fresh air, and was given to standing stark naked in the window looking out onto Craven Street, taking deep breaths of fresh air. One can only imagine the impact the sight had on passers-by in the street below.

Most of the rooms on view are unfurnished, or only slightly furnished, though there are some items of furniture contemporary with Franklin's time in the house. The fireplaces are original, however, as are the wooden floors, the staircase, and some of the painted panelling.

The photo of Polly Hewson is (c) Benjamin Franklin House Museum and is republished with permission. 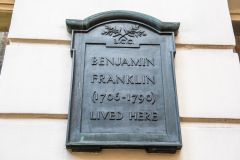 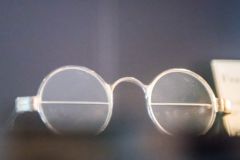 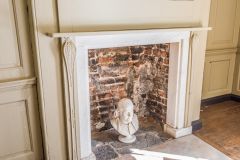 Note: You can get Free Entry to Benjamin Franklin House with the London Pass