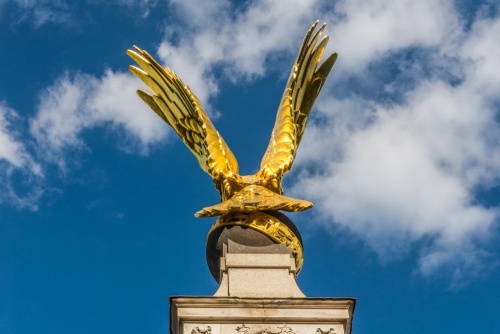 The gilded eagle atop the RAF Memorial

Standing on the edge of the Victoria Embankment looking out over the River Thames is the Royal Air Force Memorial, erected in 1923 to commemorate the men and women who fought with the RAF during WWI. The memorial was later adapted to remember RAF members who fought in the Second World War.

The aftermath of WWI saw a surge in military memorial building across Britain. It seemed an obvious step to erect a monument to those who served with the Royal Air Force during the conflict.

But that is NOT how the RAF Memorial came to be! 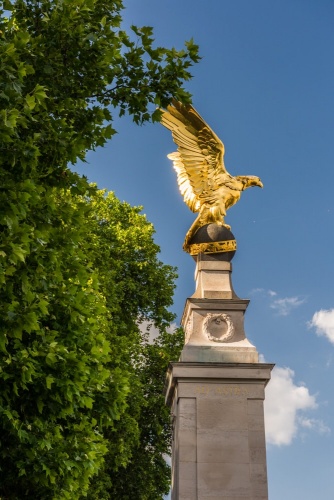 The RAF Memorial from the south

The memorial shouldn't really exist at all. In 1919 Major General JM Salmond suggested that the air force should have its own chapel in London. A shortlist of suitable architects was drawn up by the RAF Memorial Committee. When it became apparent that the cost of buying land in central London for a dedicated RAF chapel would be too high, the Committee's plans were scaled back and they concentrated on simply building a suitable memorial.

Prince Albert (later crowned as George VI) stepped in as patron. The Committee raised £40,000 from public contributions, but this sum included creating boarding schools for the children of RAF service personnel with bursaries for the children of officers, and offering medical care to disabled personnel.

The architect Sir Reginald Blomfield was called in to design a memorial. He suggested a pylon form, essentially a square column with diminishing steps. The first location considered was on the lawn outside Westminster Abbey but this request was turned down by the Dean of Westminster. The Committee's next choice for the new memorial was at the Whitehall Steps on the Victoria Embankment, opposite the Ministry of Defence building. The location was approved by the London County Council. 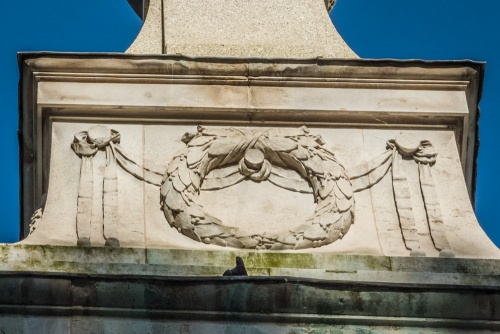 A carved wreath on the pylon

Blomfield was limited by the location; he needed to leave space around the memorial's base, and this, in turn, limited the size of the base. With a smaller base, the proportions of the column would suffer unless he added something to the top of the stone pylon. That 'something' was a gilded eagle atop a globe. The eagle was appropriate since it is the symbol of the RAF.

Blomfield's original design called for the eagle to be facing landward, towards the Ministry of Defence building, but at the last minute he changed the concept so that the eagle now appears to be taking off over the River Thames.

The eagle was based on an illustration by the ornithological artist Archibald Thorburn. The sculptor was William Reid Dick, who was selected by Blomfield. The eagle and globe were cast in bronze by the Parlanti foundry, located in Parson's Green Lane. The eagle was gilded while the globe was patinated. The pylon itself was carved from Portland stone. 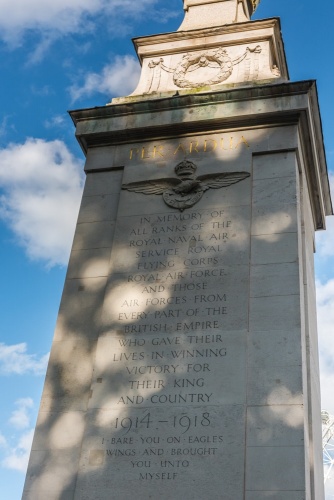 The main inscription, facing the
Ministry of Defence building

The Committee was happy with the eagle but were not sold on the idea of gilding it. Lord Hugh Cecil, the committee chair, threw his support behind the idea and the rest of the members followed his lead.

The memorial was unveiled on 16 July 1923 by the Prince of Wales. In his speech, the Prince paid tribute to those who had 'played their part in the war, braving with high spirit the unknown dangers of warfare in a new element and dying to give us the final victory'.

Three sides of the memorial are carved with inscriptions. The side facing the Embankment has two inscriptions, one on the pylon and one on the base below. The upper inscription reads:

I BARE YOU ON EAGLES
WINGS AND BROUGHT
YOU UNTO/ MYSELF

The base bears an inscription added after WWII. It reads:

On the east side of the globe it reads:

while on the pylon facing the river are the words: 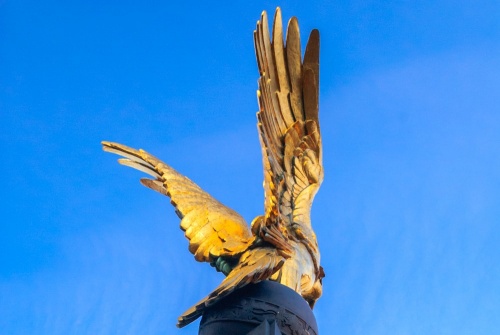 Evening light on the gilded eagle

Around the frieze of the pylon are the words 'PER ARDUA AD ASTRA' ('towards the stars'), the motto of the RAF.

Don't confuse the RAF Memorial with the Battle of Britain Monument a short distance south along the Victoria Embankment.

By far the easiest way to reach the memorial is from Westminster underground station. Simply take the Embankment exit and start walking north along the Embankment as you emerge from the station. You will pass the Battle of Britain Monument after 200 yards, and see the RAF Memorial straight ahead after another 200 yards. From the underground station to the memorial is less than 5 minutes walk.