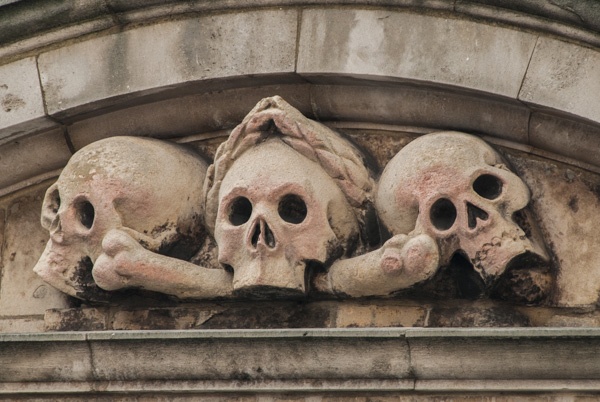 Skulls on the gateway to St Olave Hart Street

St Olave Hart Street is one of the few medieval churches to survive the Great Fire of London. It seems appropriate then, that St Olave's is the burial place of Samuel Pepys, whose diary provides the most colourful first-hand account of the fire and its aftermath. It is also the burial place of the real Mother Goose!

The church has strong links to several historic London organisations. Author Charles Dickens, with his inimitable turn of phrase, called St Olave's 'St Ghastly Grim', but the church is a real London treasure, an oasis of history in the midst of the modern city.

Who was St Olave? The story goes back to the legendary Battle of London Bridge, fought in 1014 between the Danish army of Swein Forkbeard and the English king, Ethelred, known to history as 'The Unready'. Ethelred's ally was Olaf Haraldsson, soon to become the King of Norway as Olaf II.

Olaf, possibly acting as a mercenary, joined the Christian king of England in an attempt to regain his throne from the pagan Danes. Whether Olaf was all that committed to Christianity, or whether the Danes were really less pagan than the Norwegians is open to debate. 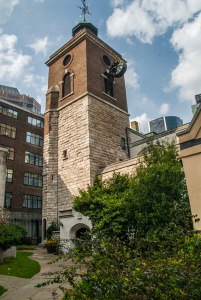 The church tower from
Seething Lane

Olaf had London Bridge pulled down to separate the Danish forces, and Ethelred temporarily regained the throne. Olaf was canonised after his death in 1030 and became the patron saint of Norway. Several London churches were named for him, using the Anglicised form of St Olave. The Hart Street church is supposedly built on the site of the battle, or at least one part of it.

The first church in Hart Street may have been erected around AD 1050, when men who had fought with him may still have been alive. The 11th-century church would have been a simple timber structure, but in the 13th century, it was rebuilt in stone, and rebuilt again in the mid-15th century under the patronage of Richard Cely, a wealthy wool merchant who died in 1482.

In 1658 a new churchyard gate was erected, decorated with a rather macabre row of skulls. The skulls were probably intended as a reminder of earthly mortality, but they prompted Victorian author Charles Dickens to dub St Olave's, 'St Ghastly Grim' in 'The Uncommercial Traveller',

"It is a small small churchyard, with a ferocious, strong, spiked iron gate, like a jail. This gate is ornamented with skulls and cross-bones, larger than the life, wrought in stone." 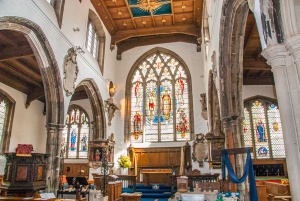 In 1665 the Great Plague of London broke out just a few streets away from the church, and around 300 victims were interred in the churchyard. Their names were marked with a 'p' for 'plague' in the church register of burials. Mary Ramsay, popularly credited with bringing the plague to London, was buried in the churchyard on 24 July 1665.

One of the parishioners who survived the Plague was diarist Samuel Pepys, who worked in the neighbouring Royal Naval offices. Pepys and his family worshipped in St Olaves, and he recorded parish affairs in his diary for 14 years from 1660.

Pepys had a gallery built, joined to the naval offices by a staircase, so he could attend services without getting caught in the rain. The gallery has been demolished, but a memorial marks the site of the stairway door.

Pepys probably saved St Olaves from the devastating Great Fire in 1666, when he ordered nearby wooden buildings pulled down to stop the fire spreading so easily. The flames reached within 100 yards of the church bt a change of wind direction allied to Pepys' foresight helped spare the church.

Another version of the story gives the credit to Sir William Penn, father of the William Penn who founded the Pennsylvania colony. Penn worked at the naval yard, and when the fire threatened to overwhelm the district he ordered the timber buildings blown up with gunpowder to create a firebreak. It is quite possible that both men played a role in saving the church, for Pepys was a high official at the navy yard at the time. 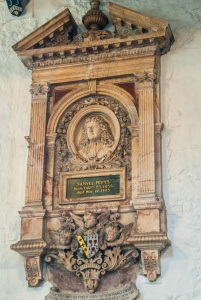 In 1669 his wife Elizabeth died of a fever and was buried in the church. Pepys had a marble bust of his wife sculpted and set on north wall of the sanctuary, where he could see it during services. Pepys himself died in 1703 and was buried in the nave beside his wife. The Samuel Pepys Club hold an annual service and lecture in his honour, on or near the anniversary of his death on 26 May.

The church, like so many in London, was damaged during the Blitz, but it was restored and rededicated in the presence of King Haakon VII of Norway in 1954.

Interior highlights include a colourful monument to Sir James Deane (d. 1608), and an ornate memorial to Pepys. Another excellent historic monument is that of Peter Turner, a wealthy physician who died in 1614. The colourful bust went missing during the Blitz and was rediscovered in an art auction in 2010. The bust was recognised before it could be sold, and after negotiations, it was installed in the church once more.

American visitors will want to see a memorial in the tower to Monkhouse Davison and Abraham Newman. The pair were grocers with premises on Fenchurch Street. In 1773 the merchants shipped a cargo of tea to Boston. The cargo was famously emptied into Boston harbour in a protest over taxes known as The Boston Tea Party.

We are on sound historical ground with the memorial to Pepys, Deane, Davison, and Newman, but one final burial deserves mention. On 14 September 1586 the church register records the burial of Mother Goose, the Pantomime character who gave rise to the popular collection of nursery rhymes. A plaque outside the church commemorates the burial, but there is no memorial to be seen.

St Olaves is a delight, a wonderful historic oasis in the midst of the bustle of modern London. It is within easy walking distance of Tower Hill tube station and is usually open weekdays to visitors.