HERITAGE HIGHLIGHTS:   For lovers of Conan Doyle's literary detective, this is heaven 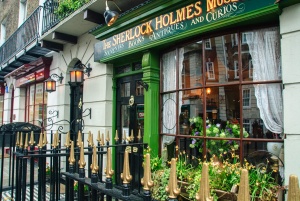 When Sir Arthur Conan Doyle began writing short stories about a fictional detective named Sherlock Holmes, he had to give him a home. Doyle used the address of 221b Baker Street. Holmes and his sidekick Dr John H Watson lived here from 1881-1904 according to the stories, and the address became etched in the literary landscape of London.

The official museum website claims that 221b Baker Street is the world's most famous address. I don't know if there are studies to back up the claim, but it certainly wouldn't surprise me if it were true.

The house was built in 1815 and is a 'listed building' due to its historic and cultural significance. The Victorian study facing onto Baker Street is kept in its original state, recreating the atmosphere that Holmes and Watson would have enjoyed. Beside the study is a bedroom, again maintained as it might have been if Holmes was there. On the 2nd floor is Dr Watson's bedroom, with views over a small back yard. At the front of the house is Mrs Hudson's room. All these rooms are filled with 'personal' belongings that aim to recreate as exactly as possible details mentioned in the original stories. For example, Dr Watson's diary is open to a page of notes for the Hound of the Baskervilles.

On the third floor are exhibit rooms with wax models of scenes from the Holmes stories. In the attic is a lumber room used by real lodgers here to store their trunks.

The museum also owns an original horse-drawn 1899 Forder Hansom cab, which can be hired for coach rides.

The short answer is that we don't know. No record of lodgers exists. We do know from local authority records that the house was licensed as a lodging house from 1860-1934, a fact that Doyle must have known when he used the address for his stories.

Dig a little deeper and several curious 'coincidences' emerge; records show that serving maids who worked here were related to a Mr Holmes. Even stranger, in the 1890s a Dr Watson lived next door. He was not a doctor of medicine, however, but a denture maker, or as the records quaintly put it, 'artificial teeth manufacturer'. I confess I was a little apprehensive when I visited the museum for the first time. Why on earth would I be apprehensive? Well, I grew up on Sir Arthur Conan Doyle's wonderful stories, and to say that Sherlock Holmes was a hero of my childhood would not be overstating things. I was worried that the museum would have over-commercialised Sherlock and Watson, creating a 'Holmesian theme park' atmosphere.

I needn't have worried; the Sherlock Holmes Museum is very obviously an act of devotion, a labour of love by people who, like me, enjoyed and still enjoy the wonderful fictional characters created by Doyle.

The visitor entrance is slightly overwhelmed by a gift-shop, but of course the museum needs to sell some memorabilia to pay the rent. But upstairs, oh, my, the deliciously Victorian chambers are filled to overflowing with Victoriana, with loving attention to details like period newspapers, books stacked helter-skelter on tables, a deerstalker hat thrown carelessly aside, a coal scuttle on the hearth.

The atmosphere was perfect, and was only enhanced by a friendly room steward, who encouraged me to sit in Holmes' chair, cram the deerstalker on my head and pick up a convenient magnifying glass.

This not a museum where eagle-eyed stewards will hiss at you to keep your hands off the exhibits, it is a place where you almost become part of the exhibits yourself. I had a wonderful time, and wouldn't hesitate to recommend a visit. It certainly was a lot less stress than Madame Tussaud's, just around the corner on Marylebone Road, where people were lined up for over a block, waiting to get in.

The museum is currently open every day except Christmas. The nearest tube is Baker Street station, just a few minutes walk away. 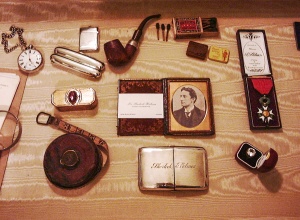 Bottom 3 photos are courtesy of the Sherlock Holmes Museum

More self catering near The Sherlock Holmes Museum

More bed and breakfasts near The Sherlock Holmes Museum