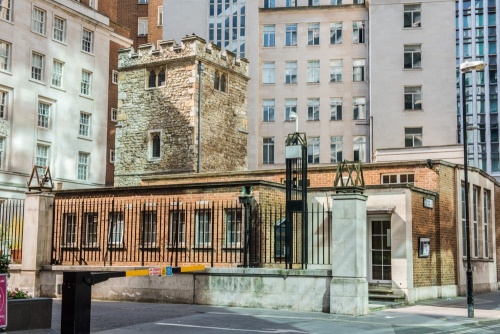 Little but the tower remains from this early church, believed to be one of the first built in the City of London. 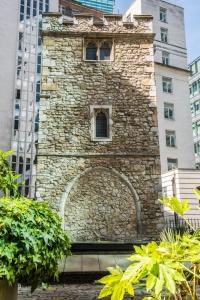 Certainly, it was in existence in the 16th century, for Princess Elizabeth, later Elizabeth I, donated new bell ropes to the church, as she said that the church bells had been music to her ears during her imprisonment at the nearby Tower of London. One of those famous bells, dated to 1458, is preserved at Grocers Hall, London.

All Hallows Staining collapsed in 1671, due perhaps to weakening of the foundations from the high number of burials at the church. A new church was built, but this was dismantled in 1870, leaving only the tower.

This tower, a severe example of Perpendicular Gothic style, was sold to The Clothworkers' Company, on condition that they maintain the site in perpetuity. It appears they have held to their bargain, for the tower still stands, amid more modern, but perhaps less appealing, London architecture.

As an aside, the name "Staining" does not refer to discolouration, or to a district of old London, but derives from "Staniggecherch" or "stone church".

The church tower is very easy to find. It stands one block west of Fenchurch Street rail station at the junction of Dunster Court and Mark Lane, immediately beside the Parish Hall of St Olave Hart Street. The tower is within an iron enclosure, which is normally locked, but you can easily see examine the tower from at least two sides from outside the railings.

Perhaps the most striking feature of the tower is a pair of very large arches, now blocked, showing where the tower joined the rest of the church. The tower is crenellated on all sides, and beneath the parapet are very finely carved pairs of trefoil windows. 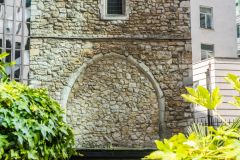 Nearest Accommodation to All Hallows Staining:

More self catering near All Hallows Staining

More Hotels near All Hallows Staining

More bed and breakfasts near All Hallows Staining