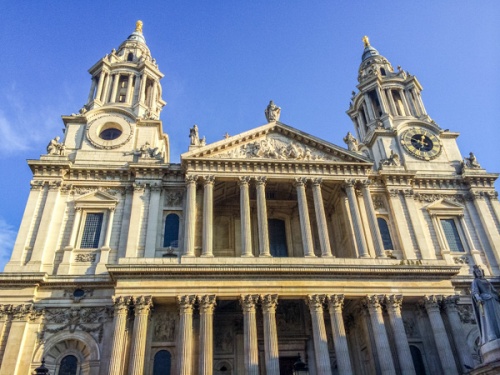 Click here for the history of St. Paul's before the Great Fire, and here for a look at visiting St. Paul's today.

The calamity of the Great Fire of London proved the opportunity of a lifetime for Christopher Wren, and the young architect did not hesitate to seize his chance.

Within days of the fire, Wren presented a visionary plan to King Charles II for turning the crowded shambles of Stuart London into a sunlight city blessed with wide avenues and open plazas. The enthusiastic Charles liked Wren's ideas, but he lacked the money to carry them out, and impatient Londoners had already begun to rebuild along the old street patterns.

Instead, Charles gave Wren the commission to rebuild the cities churches, including Old St. Paul's Cathedral. To finance this rebuilding a special tax was levied on coal arriving at the port of London.

Wren's original design for the cathedral was rejected by the church as being too modern. The second design, submitted in 1675, was a domed church in the shape of a Greek Cross. This, too, was rejected. This time the reason given was that it was too modern and too Italian (read Catholic). The scale model of this design, called the Great Model, can be viewed in the crypt of the present St. Paul's.

Finally, in 1675 Wren gave the clergy what they wanted; a traditional English church design with a long nave and spire. The king granted Wren a royal warrant approving this design with the interesting proviso that the architect was free to make "variations, rather ornamental than essential". One can almost imagine Charles giving his favourite Wren a sly wink as this was penned.

On the strength of the Royal Warrant, Wren proceeded to quietly change just about every essential element of the design the clergy thought they were getting. He got rid of three bays in the nave, did away with the spire, enlarged the dome, and raised the aisle walls.

Much of this work proceeded behind scaffolding and protected from prying eyes. By the time the furious clergy realised what Wren had done the church was too far gone to be altered.

When stone was laid for the centre of the new building, stones from the Old St. Paul's were used. Wren noticed that one of the stones was marked with the Latin inscription "resurgam", "I shall rise again". He had the word inscribed on the pediment of the south door, beneath a carved phoenix.

Portland stone was used for the bulk of the cathedral, and from the laying of the first stone in 1675 to the final touches in 1708, the cathedral was finished in a mere 33 years. This means that St. Paul's, alone among English cathedrals, is the result of one man's creative vision.

And what did Wren create after 33 years of labour? In short, a masterpiece of neo-classical architecture. The triple-layered dome that crowns the cathedral is the second largest in the world. Partway up the inside of the dome is the Whispering Gallery, so named because a whisper breathed against one wall is audible against the far wall 112 feet away.

The interior of the Cathedral may be a shock if you are used to the bare Gothic stone of medieval British cathedrals. Ornately curved and brilliantly coloured decoration abounds, and in a symmetry that is nearly overwhelming. As a place of worship St. Paul's may not be to everyone's taste, but as an architectural work, St. Paul's is a masterpiece.

The man behind this splendour is fittingly remembered inside "his" cathedral. A simple Latin inscription on Christopher Wren's tomb in the cathedral Crypt translates as "Reader, if you seek his memorial, look about you". Indeed.

Next: Touring St. Paul's today
Back: The origins of St. Paul's

More self catering near St Paul's 2