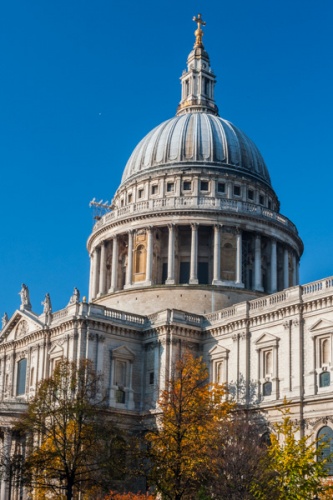 The iconic dome of St Paul's

Click here for the history of St. Paul's before the Great Fire, and here for Christopher Wren and the building of the present St. Paul's.

Modern St. Paul's is packed with memorials to notable Britons (though it seems positively airy and spacious compared to that other London mausoleum, Westminster Abbey). Wren's original cathedral had no memorials, but these began to appear in the late 18th century, and now there are hundreds.

The oldest memorial actually dates back to Old St. Paul's. It is that of poet John Donne, (he of "no man is an island" fame) who was Dean of St. Paul's from 1621 until his death in 1631. Donne's memorial is in the south aisle. In the north aisle, indeed, almost filling the north aisle, is the massive memorial to the Duke of Wellington, victor of Waterloo.

Wellington's body is actually buried in the Crypt beside the magnificent funeral carriage which carried him to his final resting place in the cathedral.

Nearby in the Crypt is the tomb of Admiral Nelson, the hero of Trafalgar. He is buried beneath an imposing black sarcophagus that was originally intended for Cardinal Wolsey and was also considered for Henry VIII.

Tucked in amongst the tombs of notable artists is that of Christopher Wren, the architect of St. Paul's. His memorial is subdued by the standards of his neighbours, but a perusal of the Latin inscription carved into the stone reveals the reason. The inscription translates as "Reader, if you seek his memorial, look about you".

The Crypt also contains a large scale model of Wren's second proposed design of St. Paul's, called the Great Model. A more recent addition to the Crypt is the Chapel of the Order of the British Empire (OBE), which was dedicated in 1960.

Back upstairs in the main church, there are further memorials to famous Britons such as General Gordon, Earl Kitchener, Sir Joshua Reynolds, JMW Turner, and Samuel Johnson. It was Johnson who penned the words, "When a man is tired of London, he is tired of life". 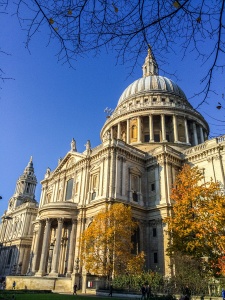 St. Paul's in the
autumn sunshine

For the fit or ambitious, you can climb 530 steps to the Golden Gallery, an observation platform atop the dome of the cathedral. From there you can look out over the modern skyline of the city of London.

On the way, the climb leads through the Whispering Gallery, a circular walkway halfway up the inside of the dome. Due to the acoustics of the curved surface, a phrase whispered against one wall can be heard against the far wall 112 feet away.

The mosaics that decorate the dome were not a part of Wren's design. They were added after Queen Victoria complained on a visit in 1872 that she found the building "dirty, dark, and undevotional".

No one could today accuse St. Paul's of being dark; indeed the nave and dome sparkle with colour and light. Just before the south transept is an unusual feature - artist Holman Hunt's own copy of his work "The Light of the World". The original is at Keble College, Oxford.

The choir stalls are worth a close look. They were carved by Grinling Gibbons, a master woodworker who was frequently called upon by Wren. And pause to take in the wrought-iron screen separating the altar from the aisles. This was created by Jean Tijou, who was also responsible for the magnificent gates at Hampton Court Palace.

Two more memorials are worth noting. These are the American Chapel, dedicated to the 28,000 US citizens stationed in the UK who died in WWII. Outside the cathedral's south wall is another moving memorial to the 32,000 Londoners killed during the same war.

Opening - See the official St Paul's website below for opening hours. Be aware that the cathedral is most crowded in the afternoon, and that it is still an active place of worship and as such may be subject to closure for religious services.

Also:
The origins of St. Paul's
The building of the present St. Paul's
Christopher Wren
The Great Fire

More self catering near St Paul's 3