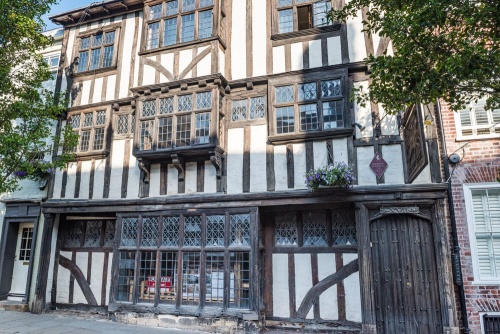 On 29 December 1170 four knights, Reginald FitzUrse, Hugh de Moreville, William de Tracy, and Richard le Breton, met at a house near Canterbury Cathedral to plan what they would do on the morrow. Whatever plan they discussed, the result was the murder of Thomas Becket, Archbishop of Canterbury, a deed which changed the course of history and certainly changed the fortunes of Canterbury itself. The place where the knights met is reputed to be Conquest House on Palace Street.

At that time Conquest House was owned by a man called Gilbert the Citizen. The knights initially left their servants and weapons in Conquest House while two of their number entered Bishop's Palace by force and remonstrated with Becket, trying to get him to remove the excommunication he had placed over several of the king's supporters.

It was a lost cause from the start; Becket was too strong-willed to succumb to their threats. The knights returned to Conquest House and gathered their weapons. In the meantime, the archbishop's servants convinced him to retire to the cathedral. It was no use; the knights entered the cathedral, and after a further argument, killed Becket in the area now called The Martyrdom. 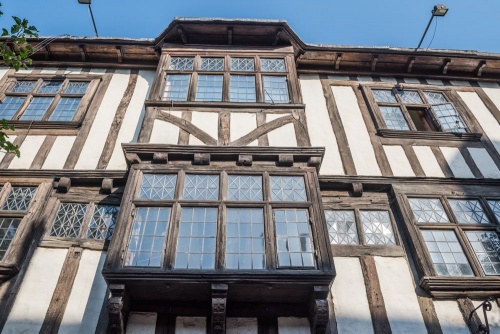 Looking at Conquest House (now an art gallery and function room) today it is hard to think of it as a 12th-century building. The front that greets your eye as you pass down Palace Street is an enormously attractive half-timbered facade in late Tudor or Jacobean style.

As attractive as the house exterior looks - and it certainly is attractive - it hides a much older interior, for behind the timber-framing lies a Norman undercroft. By comparison, the 14th-century galleried hall is relatively modern to say nothing of a highly decorative 17th-century fireplace! 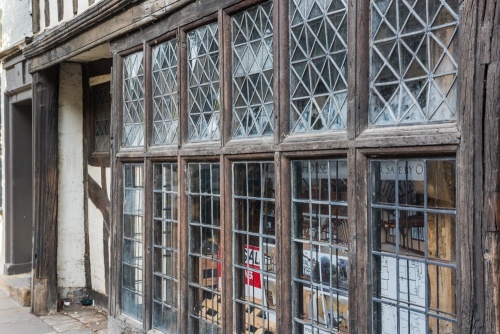 There are several interesting carvings, including an ornate coat of arms over the fireplace, created to celebrate the marriage of Charles I to Henrietta Maria, which took place at Canterbury Cathedral in 1625.

The exterior of Conquest House is beautifully embellished with carvings, including a decorative frieze along the eaves, and fanciful brackets supporting the projecting jetties that thrust out over Palace Street. 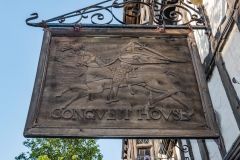 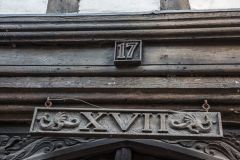 More self catering near Conquest House >>