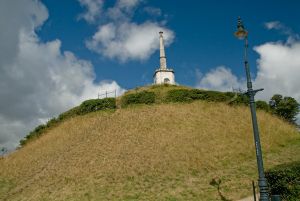 Dane John Mound is a conical hill that was the site of one of the first Norman motte and bailey castles erected by William the Conqueror. Archaeological excavation has revealed that the mound was a Roman burial site on the line of the old Roman city walls.

The Normans merely adapted the existing mound as a good spot to erect a fortification. That early motte and bailey castle was later superseded by the stone fortress of Canterbury Castle a short distance away.

Around 1790 Alderman James Simmons laid out a formal garden around the foot of the castle mound. He also laid out a winding path to the top of the mound, where there now stands a white stone obelisk in his honour.

The name Dane John is generally assumed to be an English corruption of 'donjon', a term for a defensive structure or Norman keep. Another explanation is that the name was invented by a 17th-century antiquarian who theorized that the mound was erected by Danes.

Visitors can walk along the old city walls from the castle mound. Several of the surviving towers, such as nearby Whitecross Tower, have interpretation panels giving insights into the history of the tower and the town defences.