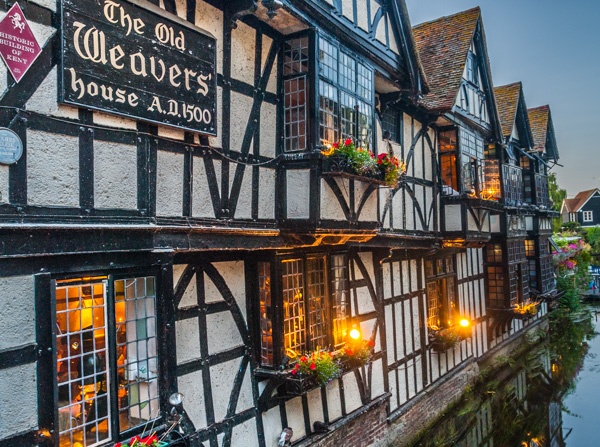 One of the most photographed historic buildings in Canterbury, the Old Weavers House is a gorgeous half-timbered building on the River Stour. The river quite literally laps at the side of the building, which currently houses a popular restaurant.

The Old Weavers House takes its name from the influx of Flemish and Huguenot weavers who settled in the area after fleeing from religious persecution during the 16th and 17th centuries. Elizabeth I granted the Flemish weavers the right to establish their businesses in Canterbury, and they are known to have used this and other similar buildings nearby.

Despite the date 1500 which can be seen prominently displayed above the door, this house probably dates back to at least the 14th century. The current building largely dates to a reconstruction in the second half of the 16th century, not the first, as you might assume by the sign!

At the rear of the Old Weavers House is a medieval ducking stool, jutting out over the river. This ducking stool was historically used as a method of punishing 'scolds' - women accused by their husbands of talking back too much! The stool may also have been used as a more severe punishment for suspected witches. The suspected witch was dunked under the water and held there for several minutes. If she (it was usually a female) did not drown, she was proved a witch. If she drowned, at least her name was cleared!

Canterbury's Historic River Tour company offer regular punt tours along the river, leaving from a small landing at the back of the Old Weavers Restaurant area. We've taken one of the tours, and it was terrific!