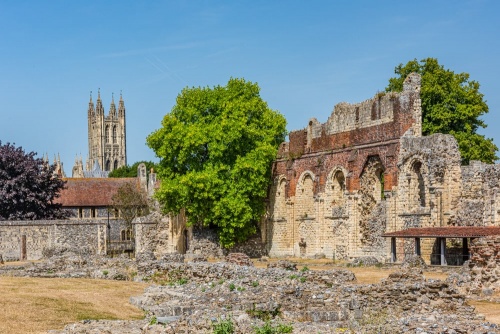 In this case the abbey isn't just dedicated to St. Augustine, it was actually founded by him, in AD 598, to house the monks he brought with him to convert the Britons to Christianity.

Shortly after Augustine's arrival in 597 King Ethelbert of Kent granted him a parcel of land stretching to about 30 acres (18 hectares) outside the walls of the city, near the course of the main road to the coast. In 598 Augustine established a monastic settlement with the small group of monks who had accompanied him to Kent. The abbey lands probably included

The abbey was used as a burial place for kings of Kent and the first archbishops of Canterbury (the archbishops were later within the cathedral itself). The site used for the burials of kings can still be seen amid the abbey ruins. 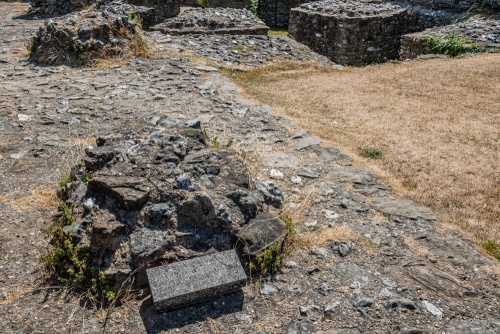 When the abbey was built, one of Augustine's companions, named Peter, was elected as the first official abbot of the new monastery. That first abbey included domestic buildings, about which little is known. It also included a linear row of chapels, in a style then common on the European continent.

One of the first chapels was the little brick church of St Pancras. The remains of this chapel can be seen at the furthest end of the abbey grounds from the visitor centre. A theory has been put forward that St Pancras was the church established by Queen Bertha, rather than St Martin's. St Pancras is certainly a very early church, and uses Roman bricks extensively. 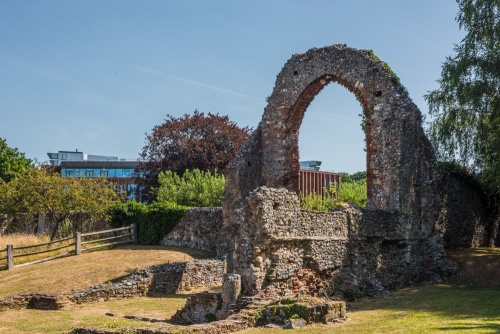 The Saxon church of St Pancras

There was a school attached to the abbey (or possibly at the cathedral). This school, which may well have been established by Augustine himself, quickly began to draw scholars from across Britain, and by the late 7th century the school had attained a reputation as a place of learning. There was also a library, which included books brought by Augustine, and more sent by Pope Gregory.

The abbey was reorganised by Dunstan, Archbishop from 959 to follow the current reforms in Benedictine rule. Abbey buildings were expanded and the church rebuilt. The early dedication of the abbey was not to Augustine, but to SS Peter and Paul. Dunstan changed that; when his rebuilt church was finished he rededicated it to St Augustine and Peter and Paul. From that point it became popularly known as St Augustine's. 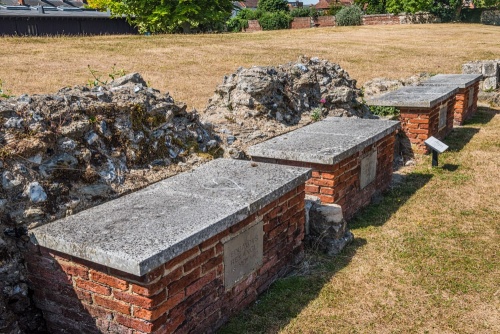 Graves of the Saxon kings

Abbot Wulfric (1047-59) was responsible for the most striking feature of the monastery ruins that still survives. This is the octagonal rotunda built to link the church of St Peter and Paul with the chapel dedicated to St Mary.

The first Norman abbot, Scolland, rebuilt many of the monastic buildings in Romanesque style. When Scolland died, the Archbishop of Canterbury named his successor, despite the objections of the monks. Several of the monks were arrested (see Canterbury Castle entry) and the objections died down quickly. The rebuilding of the Saxon abbey buildings continued until the end of the 12th century. 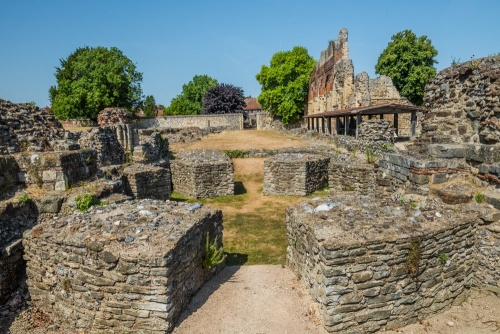 Throughout the medieval period St Augustine's Abbey built up estates throughout Kent. Included in the estates was land in Thanet granted by King Cnut. At the fullest extent of its power the abbey held over 12,000 acres of land. But that power did not last, and like all other monastic houses in the land, St Augustine's suffered at the hands of Henry VIII. On 30 July 1538 the last abbot and monks left the abbey, signalling the end of over 940 years of monastic presence.

Of the famous library, only 200 books survive, and of the abbey plate only a single silver-rimmed cup survives, in the treasury of the cathedral. After the monastery was dissolved by Henry VIII part of the abbey buildings were converted into a royal residence, used as a stopover place on journeys between London and the south coast.

The abbey site was leased out to a succession of noble families. Among these were Lord and Lady Wotton, who rented the site in 1610. The Wotton's engaged John Tradescant the Elder to lay out formal gardens within the abbey grounds. Over the subsequent centuries parts of the abbey were sold off. Some were adapted for use by King's School, the exclusive school established by Henry VIII. 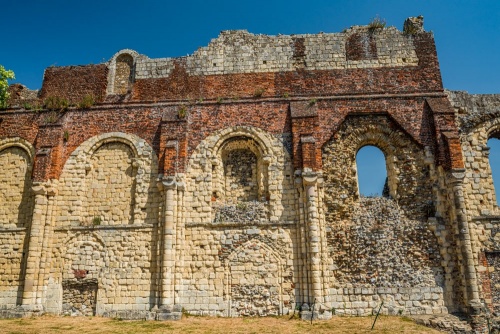 Remains of the Tudor royal palace

By far the best surviving feature of the medieval abbey is the great 14th century gatehouse, sometimes called Fyndon's Gate. Within the grounds the most impressive remain is the north wall of the nave of the abbey church, which still stands to a great height. Abutting this is a partial wall of the Ethelbert Tower. More interesting, though, is the circular remain of Abbot Wulfric's rotunda, built around 1050.

The abbey makes up part of the Canterbury World Heritage Site, which also includes Canterbury Cathedral and the nearby church of St Martin's, the oldest church in Britain still in use.

St Augustine's Abbey is on the north side of Longport, a very short stroll from the city centre via Burgate and Church Street. The route is well signposted for both pedestrians and motorists. There is a car park directly opposite the entrance and further parking on both sides of Longport.