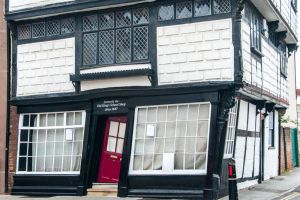 Possibly the most photographed historic building in Canterbury after the Cathedral, Sir John Boys House (sometimes known as Crooked House, King's Gallery, or Old Kings Shop) is a delightfully skewed 17th-century half-timbered building at the extreme end of Palace Street, with projecting jetties onto Palace and King Streets.

The house is named in memory of Sir John Boys, an MP and the first recorder of Canterbury (d. 1612). The most noticeable feature is the front door, which has had to be built with severely skewed corners to fit the door frame.

The house reputedly gained its markedly skewed look after alterations to an internal chimney caused the structure to slip sideways. Attempts to rectify the slippage actually caused the whole structure to skew further sideways, though now the building is stabilised internally by a steel frame.

The association of this building with Sir John Boys has been called into question by a recent archaeological survey, which found an apparent construction date of 1617, five years after Boys' death.

For many years the house was used by King's School and was not open to the public. However, it is now used as a charity bookshop for the local homeless charity Catching Lives. This means that the public are now free to enter and enjoy the building interior, unlike in the past. 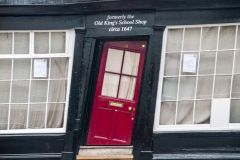