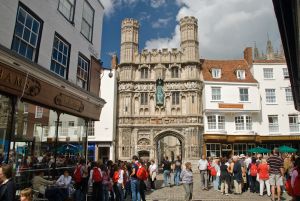 The main visitor entrance to Canterbury Cathedral precinct is through this highly decorated gateway, which was originally built to celebrate the marriage of Arthur, Prince of Wales, to Catherine of Aragon in 1502. Arthur, unfortunately, died a few months later, and the gate was not finished for another 20 years.

It was worth the wait, however, as Christ Church Gateway is an extraordinary monument; it is highly embellished and decorated with heraldic motifs, including coats of arms and mythical beasts.

At the centre, above the gateway arch, is a very large figure of Christ. This is a modern statue, replacing the original statue which was damaged during the Civil War by Parliamentary troops. Apparently, the troops decided to use the statue for target practice, then, not content with the damage they had inflicted, attached ropes to the statue and pulled it down.

There are two doors through the gate; a large door to the right, and a much smaller portal to the left. Both doors are beautifully carved and embellished with more heraldic symbols.

Christ Church Gateway has been the subject of numerous paintings over the years, including several by JMW Turner which can be seen in the Fitzwilliam Museum in Cambridge and the Tate Gallery in London.