Church of the Holy Rude 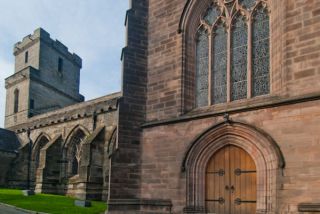 Church of the Holy Rude

The most intriguing historic church in Stirling, built in Scottish Gothic style. Holy Rude was built in stages, the oldest part dating to the early 15th century. The nave has a lovely 15th-century timber roof, while the massive exterior features thick buttresses between the great windows.
History
Holy Rude was founded in 1129 to serve as the parish church for Stirling. It was known simply as the 'Church of Stirling' until Robert II established an altar here, dedicated to the Holy Rude (Holy Cross). In 1405 a fire swept through Stirling, destroying much of the town and devastating the 12th-century church. The Lord Chamberlain of Scotland granted money for a new church, which was completed in 1414. It is this early 15th-century rebuilding that forms most of the church we see today, with Gothic arches and a timber roof.

Throughout its history, the church has had close links with the nearby royal castle and the Stuart monarchy. In the early 16th century the east end was rebuilt, and tradition says that James IV pitched in and personally helped the masons with the work.

The infant James VI was crowned here in 1567 when John Knox preached the sermon. That makes Holy Rude the only church in Britain still in use to have hosted a coronation, outside Westminster Abbey. To put things into perspective, however, the ceremony at Holy Rude was attended by just 5 Earls and 8 Lords, a mark of just how contentious was the move to have James replace his mother, Mary, Queen of Scots, on the throne. Knox's sermon was apt; he preached on the Biblical tale of the murder of Queen Athaliah and the crowning of the young King Joash in her place. The baby king was crowned by the Bishop of Orkney, and the ceremony was finished in 20 minutes, for the Protestant lords were fearful of a Catholic attack and were in a great rush to return the new king to the safety of Stirling Castle.

In 1997 Queen Elizabeth II attended a re-enactment of the coronation at Holy Rude and unveiled a plaque to mark the occasion.

Bullet holes pockmark the tower, possibly the result of musket fire during the siege of Stirling by Cromwell in 1651. Several gravestones in the churchyard show bullet holes from action during the second Jacobite rebellion.

The church is usually open to visitors during daylight hours and is easily accessed from the castle and other major attractions in central Stirling.

Nearest Accommodation to Church of the Holy Rude:

More self catering near Church of the Holy Rude >>

More Hotels near Church of the Holy Rude >>

More bed and breakfasts near Church of the Holy Rude >>