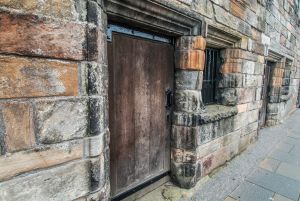 Mar's Wark
In 1569 the powerful 1st Earl of Mar, Keeper of Stirling Castle and former Regent of Scotland, began building an ornate townhouse in Renaissance style at the top of Stirling's Old Town. The house was never finished and was later used as a workhouse.

Today, only the richly decorated facade remains to suggest the grand project that the Earl envisaged when he began his work.

The facade is decorated with fanciful stone carvings, with much of the stone scavenged from the ruins of Cambuskenneth Abbey. The style, though decorative, marks a transition from purely defensive buildings to structures built for comfort and to show off wealth - thus you can see, mixed with decorative gargoyles, several gun loops.

The current facade of Mar's Wark is two storeys high, though the original structure reached three storeys. The top storey was removed in order to make the structure more stable for preservation purposes.

Mar's Wark was briefly the home of the 6th Earl of Mar, who led the Stewart forces in the 1715 Jacobite rebellion. When the rebellion fizzled out, the Wark was seized by the crown and used as barracks. It was damaged by cannon fire in the second Jacobite Rising in 1745 and never repaired.

More self catering near Mar's Wark >>