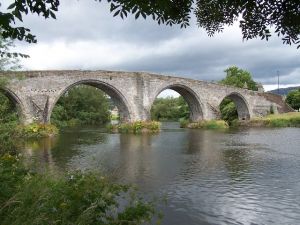 Stirling Old Bridge
A beautiful late 15th or early 16th-century bridge across the River Forth at Stirling that was for over 400 years the lowest crossing of the Forth. From around 1500 until a new bridge was built in 1831 the Old Bridge served as the main entry for goods into Stirling Burgh.

Taxes were charged on all goods entering the Burgh and customs men occupied a covered booth in a niche at the centre of the bridge. In 1571 Archbishop Hamilton was executed by being hung from a specially constructed gallows set up on the bridge.

That was not the end of the drama at the bridge, for in 1745 the Old Bridge played a part in Bonnie Prince Charlie's Jacobite Rebellion. As the Prince's Highlanders advanced on Stirling, General Blackney, in charge of the defences, blew up the southernmost arch to prevent the rebels from crossing. The bridge was rebuilt in 1749.

The Old Bridge stands just upstream of an earlier wooden bridge where William Wallace routed the English forces at the Battle of Stirling Bridge in 1297.

You can view the bridge from the western end of Bridgehaugh Road, off the B823 on the east bank of the river, or from a footpath off the east end of Lawrencecroft Road on the west bank.