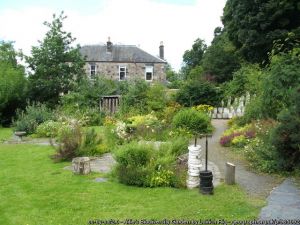 Stirling Smith Art Gallery and Museum
This historic museum tells the story of Stirling and its people, with a huge collection of artefacts and art telling the story of Stirling's rich past. The museum is linked to a public art gallery reflecting views of the town and Stirlingshire, plus contemporary exhibits.

Victorian artist Thomas Stuart Smith (1815-1869) left a bequest to establish a museum, library, and gallery of contemporary art for the Stirling area, especially aimed at broadening the outlook of the artisan and working classes. The Smith Institute, as it was called, opened in 1874 on land given by the Burgh of Stirling.

Smith was keen for the art gallery part of his bequest to take centre stage and wanted an Italianate building since he had fallen in love with Italy during his European travels. He intended to oversee construction of his new institute himself, but he died suddenly on a trip to France.

Aside from its role as an art gallery, 'the Stirling Smith' has collected a huge archive of historical artefacts and paintings of Stirlingshire.

The ground floor holds a lecture theatre, cafe, and a gallery of temporary exhibitions (originally used as a natural history exhibition). Gallery 2 holds community and special interest exhibitions, usually photographs or paintings of the local area.

Gallery 3 is one of the largest exhibition spaces in Scotland. This huge space hosts The Stirling Story, tracing the history of Stirling from prehistoric times to the 21st century. Themes include the arts, community, history, and children's activity area.

Included are several rare items, such as a rosewater dish, crafted for King James VI's Palace of Holyrood in 1600. Then there's the official key of Stirling, taken by Bonnie Prince Charlie in 1746, and Cowane's Chest, carved from oak in 1636 and carried away by the Jacobites during the Second Rising.

Sports fans will enjoy seeing the oldest football in the world, made of leather wrapped around a pig's bladder and made sometime prior to the 1540s. There must have been a rip-snorting game of football in Stirling Castle, for the ball appears to have been kicked too high and become lodged in the rafters of the Queen's Chambers. There it was left for over 400 years until it was retrieved in the 1970s.

If you prefer winter sports there's the oldest curling stone in the world, probably lost through a hole in the ice at Milton Bog. Another highlight is the Stirling Jug, made of gun metal in 1511 and made at Edinburgh Castle by the man responsible for casting the king's cannons. The jug holds 3 imperial pints and was used as the national standard for liquid measurements.

One of the museum highlights is a rather gruesome reminder of rough justice. In 1820 a group of weavers staged the 'Radical War', an abortive uprising against the government in an effort to bring about social reform. Most were transported to Australia, but the ringleaders, John Baird and Andrew Hardie, were executed on the High Street.

The government wanted to make example of the pair to quell attempts at social reform, and sentenced them to the same punishment as that meted out to William Wallace in 1305; to be hanged, then decapitated, and have the remainder of their bodies quartered and sent throughout the realm as a warning to others.

The Stirling executioner refused to carry out the sentence, so a medical student named Thomas Moore was hired. Moore's cloak and axe are on display, as is a desk and chair from the Scottish Parliament with an exhibition about the episode.

Behind and around the museum building is Allie's Garden, a 2-acre space combining a biodiversity garden, outdoor gallery, and family activity area. The garden portion of the grounds has been developed as a 24-hour gallery, with a butterfly border, herb garden, orchard, willow garden, kitchen demonstration garden, and storytelling area.

More self catering near Stirling Smith Art Gallery and Museum >>