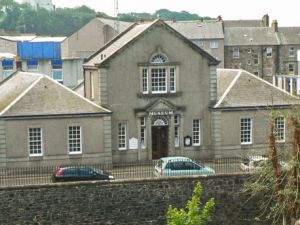 Bute Museum
Bute Museum is an independent museum covering the archaeology, history and geology of the island, from the Mesolithic era to the present day.

The three major themes of the museum are Natural History, Archaeology, and History. The natural history galleries include a large collection of rock from every part of the island, showing how the climate of Bute affected the rock and soil, and how Bute is divided into three valleys by the action of glaciers. There are displays on the plant species that thrive on Bute (did you know that over 750 kinds of fungi have been found on the island?).

Exhibits cover the wide range of animals and birds on Bute, from dragonflies, ladybirds, reptiles and amphibians, and a checklist of over 300 varieties of large moths.

The Queen of the Inch
It is in the History and archaeology exhibits that the museum really excels. One popular exhibit is the 'Queen of the Inch'; a cist burial of a woman from the islet of Inchmarnock. The 'Queen' was buried about 2000 BC, with a collection of grave goods including a necklace of lignite and a flint knife. The necklace was found to have come from Whitby (Yorkshire). The woman's head and face have been reconstructed so that we can see what she would have looked like in life.

There are a large collection of finds from nearby Rothesay Castle, including weapons, tools, a medieval glazed jug, and even part of the original oak bridge across the moat, which shows signs of burning. One rare survivor is a very early chess piece, thought to represent a knight.

Cotton Mills
Another exhibit tells the story of the Rothesay cotton mills. The first mill opened here in 1779, and by 1855 there were over 1200 people employed in cotton weaving, with over 1000 looms working. Some mills paid workers in tokens which could only be spent in shops owned by the companies. Children were employed in the mills, and only started their school day after their shift at the mill had finished for the day. The mills declined in importance in the late 19th century and the last mill closed in 1880. The museum has a wealth of information on the history of the cotton industry in Bute, including old photographs and artefacts from the mills and mill workers.

Another large collection relates to the early Christian heritage of the island. Bute was a centre for early Celtic Christianity, and there are written records of the bishops and abbots of Kingarth from around 660 AD. See finds from St Blane's chapel and monastery, carved stones from Inchmarnock, and St Mary's church just outside Rothesay.

Look for the 'MacAlister Stone', a 1000-year-old cross shaft decorated with interlace designs and carvings of a horseman, a winged animal, and birds. There are also displays of finds from the Iron age fort at Dunagoil, including a whistle carved from bone.

Nearby accommodation is calculated 'as the crow flies' from Bute Museum. 'Nearest' may involve a long drive up and down glens or, if you are near the coast, may include a ferry ride! Please check the property map to make sure the location is right for you.

More self catering near Bute Museum >>

This stunning cottage is set within the grounds and gardens of Mount Stuart House on the beautiful Isle of Bute and can sleep six people in three bedrooms.
Sleeps 6 A superb coastal property, mostly ground floor, near Rothesay on the Isle of Bute and can sleep eight people in four bedrooms.
Sleeps 8