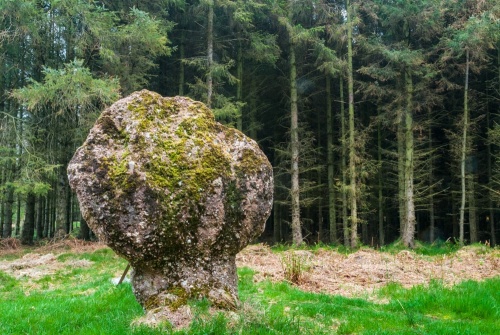 Three stones remain of the original seven stones, each different in character. Two are conglomerate and the third is schist. 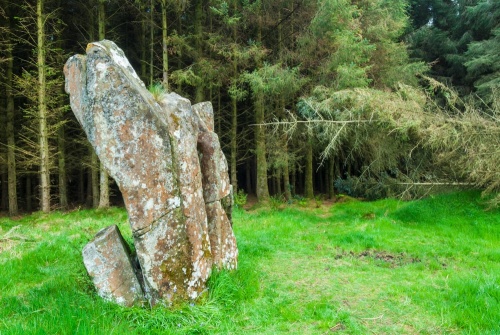 The most striking by far is the northernmost stone, which has a very narrow base and a large, bulbous top, like an oversized mushroom. This stone is made of a peculiar reddish conglomerate. This stone must have fallen at some point in the past and is now supported by a metal prop. It is 2.2m high and 1.1m x 0.5m at the base, broadening to 2.0m x 0.5m near the ovoid top.

The central stone has large vertical fissures where it has been split by frost. It is very irregular in shape and measures roughly 2.8m high by 2.2m by 1.0m. This stone is of schist.

The southernmost stone stands on a low mound. Like the northernmost stone, it is a conglomerate material. This was damaged in a storm in 1974 and has been restored. It is roughly 2.2m high x 1.3m wide and 0.6m thick. This stone has several examples of graffiti scratched into its surface, and what appears to be an incised cross.

From Kingarth village take the A844 west, then turn off onto the unclassified road (Plan Road) to Dunagoil and St Blane's. The road runs along the western edge of the Blackpark Plantation. You see the small airfield to the west of the road, and the stones are almost directly opposite on the eastern side.

The standing stones are immediately beside the road, about 600m from the junction. The location makes the Blackpark standing stones one of the easiest prehistoric monuments in Britain to find. There is a small car park, and from the park you can follow a signposted footpath to the beach at Kilchattan Bay, about 1km to the east.

Nearby accommodation is calculated 'as the crow flies' from Blackpark Standing Stones. 'Nearest' may involve a long drive up and down glens or, if you are near the coast, may include a ferry ride! Please check the property map to make sure the location is right for you.