HERITAGE HIGHLIGHTS:   The ruins of Kelspoke Castle stand above the village 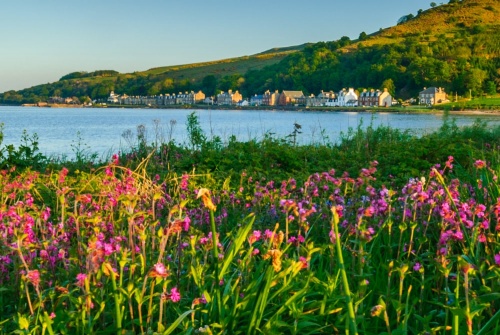 Kilchattan Bay is a lovely little village in the southeastern corner of Bute, looking east across the Firth of Clyde to the Scottish mainland. North of the village a broad, sandy beach sweeps in a semi-circle to form the bay from which the village draws its name.

This sweep of the coast is known locally as the 'Wee Bay'. The sand here has a distinct reddish hue due to the presence of red sandstone. 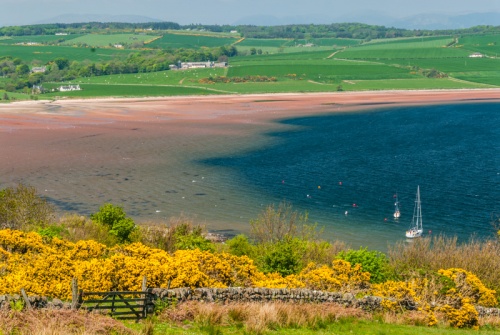 Both the village and bay are named for St Cathan, or Catan, or Chattan, a 6th-century Irish bishop and missionary who established a hermitage here in AD 539.

Very little is known of St Chattan, but a number of churches across the islands off Scotland's west coast are dedicated to him. Chattan's nephew was St Blane, who was born here and established a monastery nearby. The monastery lasted until it was destroyed in a Viking raid in the 8th century.

A 12th-century chapel dedicated to St Blane stands on the site, one mile southwest of the village. 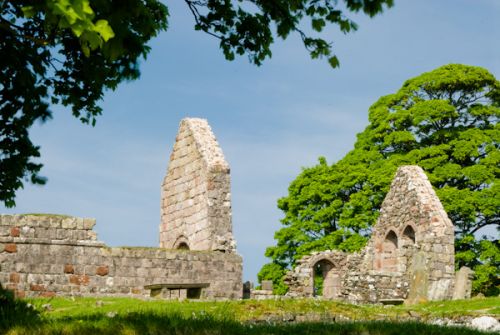 The village developed as a cluster of fishermen's cottages at the southern end of the bay, served by a stone dock. Limestone was mined from the lower slopes of Suidhe Chatain, the hill that rises immediately behind the village. The limestone was processed at a kiln, the remains of which stand behind St Blane's Villa.

A trail leading up the slope of Suidhe Chatain leads you to the scanty remains of Kelspoke Castle, a late medieval fortified house. Below the castle ruin is the Lower Reservoir, formed from a former limestone quarry that fed the kiln further down the hill.

Kilchattan Bay developed as a holiday resort in the late Victorian period, like many places on Bute. Steamers brought holidaymakers from Glasgow to a newly constructed wooden pier. The St Blane's Hotel (now a holiday cottage) was built to accommodate these tourists. 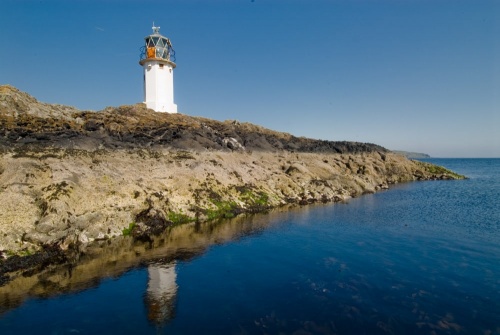 The last regularly scheduled steamer left Kilchattan Bay in 1955 and the pier was closed and was eventually destroyed, but not before it welcomed Queen Elizabeth II and Prince Philip on a visit in 1958.

The old church in Kilchattan Bay dates to 1895. It is built in traditional Victorian Gothic style, of red sandstone with ashlar dressings. The exterior highlight is a large rose window in Geometric Gothic design under the front gable. The former church is now a dwelling. 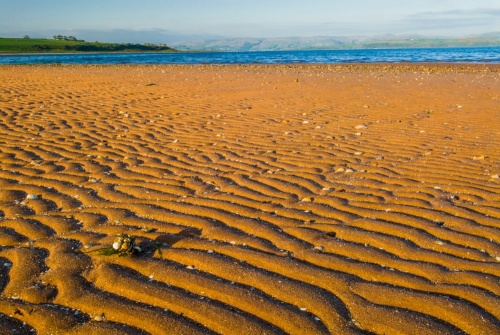 The 'Wee Bay' at low tide

The West Island Way long-distance trail starts in Kilchattan Bay. The trail leads south along the coast to Glencallum Bay, where an early 20th-century lighthouse designed by the famous Stevenson family of engineers looks south towards Arran and Ailsa Craig.

The trail loops back past the ruins of St Blane's Chapel and Holy Well (well worth a visit), before heading north to bypass Rothesay and make another large loop around the northern coast of Bute.

Kilchattan Bay is on the B881, just south of Kingarth. From Rothesay, take the A844 and turn off at Kingarth. There is parking in the centre of the village, near the pier.

Nearby accommodation is calculated 'as the crow flies' from Kilchattan Bay. 'Nearest' may involve a long drive up and down glens or, if you are near the coast, may include a ferry ride! Please check the property map to make sure the location is right for you.