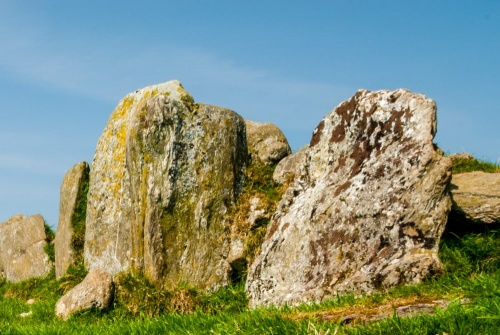 St Michael's Grave (sometimes known more simply as Michael's Grave) is a collapsed Neolithic chambered cairn in the northwestern corner of Bute, a stone's throw from the ruins of the early Christian site known as Kilmichael Chapel.

The burial cairn is of the Clyde type, found frequently around the Firth of Clyde. It consists of a burial chamber divided into two compartments, both of which are now filled with rubble.

A fallen capstone lies on the south-facing slope below the cairn. This capstone measures 1.4m x 2m (roughly 3 feet x 6.5 feet) and is 0.2m in thickness (about 8 inches). 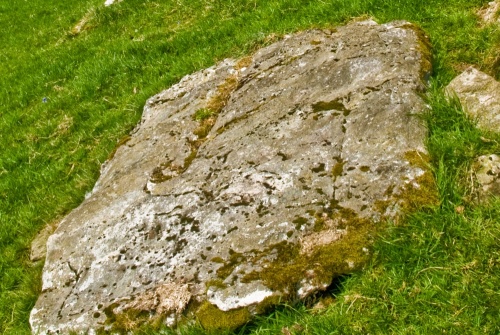 When the cairn was excavated in 1903 a layer of blackened earth mixed with charcoal was found on the burial chamber floor. Also found were a fragment of plain pottery, flint tool flakes, ox bones, a pig tooth, and partially cremated human bones. All but the pottery fragment have been lost. The piece of pottery is now held in the National National Museums Scotland, in Edinburgh. 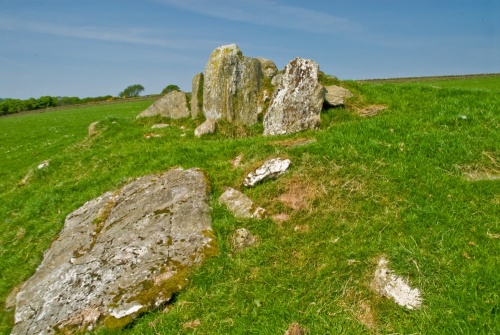 The cairn and capstone from the southeast

There is no direct association between St Michael and the chambered cairn, which was built here millennia before Christianity appeared, very probably in the period between 4000-2000 BC. The name likely comes from the ruined chapel, built in the early Christian period, probably sometime between AD 500-700.

The cairn lies at the top of a small rise about 500m south of Kilmichael Cottage and just southeast of the ruined chapel dedicated to St Michael.

To reach the cairn you have to park at Glecknabae, the northern end of the coastal road running north from Ettrick Bay. From the parking area proceed on foot up the obvious lane that hugs the west coast of Bute. You will pass the South Wood of Lenihuline, where a trail heads off to the right to the Cairnbaan Chambered Cairn. Continue down the coastal road until you reach a farm gate giving access to a field. You will see St Michael's Grave ahead in the field.

From the parking area at Glecknabae to the cairn is roughly 2.5km (1.5 miles).

Though the interior of St Michael's Grave has been obscured by farming, I thought it was well worth the visit, especially because you can very easily combine it with a visit to Kilmchael Chapel and Cairnbaan Chambered Cairn.

Nearby accommodation is calculated 'as the crow flies' from St Michael's Grave. 'Nearest' may involve a long drive up and down glens or, if you are near the coast, may include a ferry ride! Please check the property map to make sure the location is right for you.